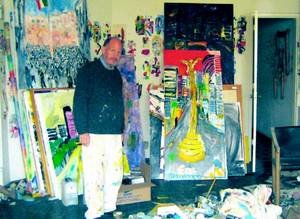 FOR several weeks last year, Phil Kelly made his way to the Tax Museum in the heart of Mexico City. A former convent building, the museum staff had set aside a working space for the Co Wicklow-born artist.

Zocalo (triptico) . . . was inspired by the activity around the central cathedral square in the Mexican capital. The imposing Spanish baroque cathedral dominated the artist's thoughts as he prepared a backdrop of a bright yellow sky.

And as he worked capturing the vibrancy of city life . . . Kelly was paying his tax bill to the Mexican government.

The arrangement is similar to Ireland's Artists Exemption Scheme with one significant difference. Here, the Revenue Commissioner certifies work of 'artistic or cultural merit' and the writer, musician or painter pays no tax on any income generated from their endeavours. But in Mexico the artist must give something to the state in return for their tax-free status. So, for example, writers donate research notes or draft working papers while artists provide paintings which then hang in public buildings throughout Mexico.

Kelly has established a reputation in Mexico with his work hanging in the country's national museum of contemporary art. He was recently commissioned by the Holiday Inn group to paint a large work for a new hotel in the Mexican capital. "I never imagined I'd survive off the paintings, " he admits.

The Kellys left Bray in the early 1950s. It was a departure motivated by economic necessity.

Their emigration experience was similar to thousands who sought to make a new life in the United Kingdom.

Kelly's father wanted to preserve the family's sense of Irishness but Phil recalls being told to speak with an English accent. "We used to go back to Bray. There are pictures of me with a bucket and shovel on a freezing beach, " he says.

As his father's work prospered, his son was enrolled at the prestigious Rugby public school.

Kelly's contemporaries included Jeremy Paxman and Salman Rushdie. "I was more Irish than English, and there would be fights, particularly around St Patrick's Day. They were very mean to Salman Rushdie [because of his background] and made his life unbearable, " he says. The environment was harsh. "It was hell. The place was run by a bunch of bastards. It was like a mini-concentration camp. And the food. It took years for me to taste food properly, " he recalls.

Kelly pined for home, which was only a 10-minute journey away. His plight was made much worse with the death of his mother. "She was sweet. I remember spending hours in the kitchen when she was baking and I would lick out what was left of the pudding mix, " he says. News of his mother's death was delivered by one of his school teachers.

"He said to me, 'Kelly come to my office. We're sorry about your mother but you'll just have to get on with things.' Imagine telling a 10-year-old, 'you're f***ed for the rest of your life'."

Rebellion followed. The young boarder would secretly make nightly visits to a local pub. He was drinking vodka. "They found me in the pub. I was bored with the place and all those expectations about going up to Oxford or Cambridge. I didn't want to be part of it. So I had this double existence."

A nomadic existence followed for many years. Kelly wanted to paint but was struggling to find the time and space as he struggled to make a living in a variety of jobs. He worked on a game reserve in Kenya, lived on a beach in Crete and earned money as a bread man in Bath.

The American country came out on top. "I was feeling suicidal. I had no money. I had no Spanish.

The woman was gone. I arrived with $50, and half of that was spent on a hotel. I got the golden pages and found schools that taught English, " he says.

In 1985, an earthquake hit Mexico. Phil's girlfriend was killed. He left the country, returning again to Europe but was eventually drawn back to Mexico.

A new relationship offered stability. He now lives with his wife Ruth and their two daughters in the centre of Mexico City. Ruth manages the business of his art . . . organising exhibitions and showing finished work to buyers.

Kelly . . . a shy and reserved man . . . has his studio in a nearby apartment block. The two bedroom unit has the appearance of a crime scene.

Newspapers and magazines are piled up in several corners.

Discarded oil tubes and paint brushes litter the floor. A mountain of CDs rest alongside a couch . . . jazz music plays as he paints . . . and empty bottles of Victoria beer stand erect on a large table. The apartment makes Francis Bacon's recreated studio in the Hugh Lane Gallery appear almost neat.

For years, this apartment has been Kelly's workplace. He developed a preference for painting with his fingers . . . heavy oil paints layered on the canvas.

But the fumes and toxins have taken their toll. Last year Phil was diagnosed with liver disease, an illness from which he is still recovering.

He is currently preparing work for a new exhibition in Dublin in the summer of 2008. His art has captured the boom years of the Celtic Tiger . . . the paintings are brash and marked by explosions of colour.

The work has been hugely popular at the Hillsboro Fine Art Gallery in Dublin where most buyers are unaware of the artist's strong reputation in Mexico. In Kelly's apartment studio, canvasses of landscapes and nudes rest against the walls.