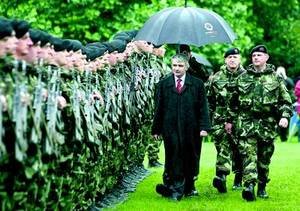 TOP earners in the €100,000-plus bracket will take most of the pain with hefty tax increases in Tuesday's budget, which is likely to be the most draconian in almost a quarter of a century.

The chronic state of the public finances means the government cannot simply rely on stealth taxes – leaving tax credits and bands unchanged – and there will be headline tax increases for at least some workers.

Finance minister Brian Lenihan is likely to scrap or considerably raise the PRSI ceiling, although the Sunday Tribune has learned there is concern in government that raising the top rate of tax might send out the wrong signal and depress consumer confidence further. More targeted but less politically sensitive tax increases like levies may be on the cards.

A cut in the €1,000 per year per child early childcare supplement is believed to be highly likely.

Air passengers will be hit by a new air travel tax to be levied on all passengers leaving the country from main airports. The tax is expected to be in the region of €10 per ticket but could be considerably higher for long-haul flights and routes from the USA.

Agriculture minister Brendan Smith told RTÉ radio yesterday that Tuesday's budget would be tougher than anticipated. Severe decisions had been made but they were responsible and balanced, he said.

The Sunday Tribune also understands that the government has looked closely at free medical cards for over 70s and child benefit payments – both of which are paid out without means testing. The unsustainability of providing these universally, regardless of wealth, mean some change is likely to be announced on Tuesday, although the government is anxious not to impact on average earners.

"It won't be as radical as people think," one senior source told the Sunday Tribune.

Other measures are likely to prove more controversial. With departments having to find cutbacks in excess of €2bn on day-to-day spending, the pain from Tuesday's budget will not be confined to high-rollers.

It is understood that cutbacks in the Defence budget mean that two of the state's barracks will be closed, which is likely to prove extremely sensitive politically in the areas affected.

As many as 25 state agencies will be culled. The Combat Poverty Agency will be brought back into the Department of Social Affairs; all the regional fisheries boards, along with the central board, will be amalgamated into one fisheries board; and the National Consumer Agency and the Competition Authority will be merged.

The old reliables of drink, cigarettes and petrol are also certain to be hit. The deflationary impact of the dramatic global economic slowdown gives the government much greater scope to hike taxes on these areas without having to worry about inflation. Tax increases in these areas would come in from midnight on Budget day giving an instant boost to the state's hard pressed finances.

Lenihan is also likely to make an announcement on extending a voluntary redundancy programme from the HSE across the entire public sector with a view to sharply reducing public sector numbers.

However, the Department of Finance is determined to avoid past mistakes and ensure any such programme is targeted at the right areas. For that reason, Lenihan's comments may be limited to announcing that a group will look at how best this can be done.

The government is also expected to confirm the establishment of a new fund worth 250m to help out first time buyers.

This PRSI levy is not paid by civil servants is it? This means that civil servants with the same gross income as private workers will be materially better off to a massive extent on their take home pay, particularly at the higher levels of pay. And this ignores their pension benefit in kind. The government had better not introduce this without removing this anomaly and freezing public sector pay, and benchmarking public sector pay to the lower rates of pay in the private sector in the next few years.

I am glad that Fianna Fail won the last election, they can now sit in the mess they created and await the mauling that will propel Fine Gael into government for the next 20 years.

Civil servants who joined before 1995 do not pay full PRSI. They also DO NOT get dental/health benefits and most importantly they DO NOT get a state pension.

Civil servants who joined after 1995 do pay PRSI; get off your hobby horse.

The civil service needs to be attacked with an axe. If there are job cuts in the private sector and higher productivity expected from the retained employees, why then such a problem when the civil service is asked to do its bit.
Social Partnership 'my backside' - it was and is nothing more than an agreement between the state and its own employees.
Well it's time for the shareholders to step in and dictate what happens.

Regardless, civil servants prior to 1995 don't pay PRSI. Do you know what percentage of employees in the civil service joined before 1995? Prepare to fall off the hobby horse. Remember "benchmarking"? Now answer me seriously if you believe the private and public sector are equal in terms of either renumeration, pension, BIK or taxation terms.

Civil servants who joined before 1995 DO pay PRSI, just not at the full rate.

After suffering facial injury in my youth I finally scraped the loan together to have my diseased teeth fixed: root canals, crowns, implants, 30,000 Euro with 40 per cent rebate. Now this is cut to standard rate, I will have to leave much of the work undone.
My son, also was due to have teeth implants after a sports injury. His university "registration" fee has risen to 1,500 Euro, as has his sister's. The middle classes, public or private, pay for everything as usual.
I gained little from the boom, did not splurge on credit cards, loans or shopping trips but must bail out the bank chiefs who spent "because they were worth it". There is a lot of rage against the public sector, but the ordinary public sector worker did not cause this mess. It was unregulated private sector thinking, especially at the top, cheered on by the media (with much sneering at stick-in-the-mud civil service types as compared with the hot-shot, 'lunch is for losers' financial services whizz kids) which encouraged amoral profiteering by bankers and the protection and incentivizing of greed by millionaire property developers .
The really rich escape in this budget as they have always done. They must enjoy the spectacle of low paid workers from public and private sectors, fighting with each other instead of with them.

Words of wisdom Annette, and it has to be said when the private sector ride high they look down on those in the public sector as they have jobs which are lacking in dynamism with fixed increments, while they can make a million in a year while business is booming...then when things go wrong and the boom goes away they treat public sector workers with envy, fixed ceiling of income-and-all. Annette is right, few get rich in the public sector, it's a choice between boom-and-bust or stability. Fair and simple!

I am so glad I voted no to Lisbon. This budget proves that these people cannot be trusted and I include the Greens and the PDs in that. And as ironic as it sounds you can count Sinn Féin among that rabble as well. Their response to the budget would suggest that they can't wait to join FF.

Annette, all I can say is to agree with you and that as long as the government can create a media lynch mob and set dedicated workers against each other then we will collectively remain voiceless. Take heart, your kids will finish college and will make you proud. As long as they are aware of the sacrifices made on their behalf then there will remain the hope that this shower will never see public office again.

Will the last one out of Ireland please turn .off the lights. Bye bye

Thanks, Luke and Phil.
What really amazed me was that some organs of the print media (The Sunday Indo etc) last Sunday spent page after page crudely attacking the public service:"Sack these idlers" "Penpushers" "Crusty old teachers in corduroy jackets", real personal invective.
Essentially the same article on every page. Only Gene Kerrigan alluded to the rich bankers and property developers.
Is this orchestrated to whip up rage against the public service ahead of reform report? They do not say where they want the cuts, but are annoyed at class size change and its impact on kids. But that is happening because thousands of public servants (teachers) will be taken out of the system this year. They do not make this connection.
Is the Indo trying to distract readers from the real cause of the crash, and its own role in cheering on and drooling over the super-rich?
I am not saying that the public sector would not benefit from some reform, but it is scary the way it has suddenly become 'The Enemy', the 'Big Bogeyman', while bankers are forgotten about.
Who changed the terms of the debate so cleverly? Who benefits?

Comments are moderated by our editors, so there may be a delay between submission and publication of your comment. Offensive or abusive comments will not be published. Please note that your IP address (209.234.171.45) will be logged to prevent abuse of this feature. In submitting a comment to the site, you agree to be bound by our Terms and Conditions