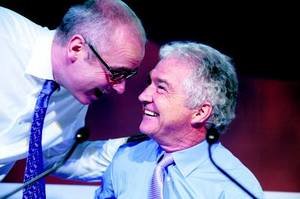 THE Department of Finance raised no concerns when told about the controversial transfer of billions of euro from Irish Life & Permanent to Anglo Irish Bank in a bid to dress up the books of both banks, claims a secret internal report compiled by Anglo and seen by the Sunday Tribune.

In a set of astonishing new revelations and claims, drawn from legal memos, transcripts of phone calls and audit material, Anglo claim that a senior finance civil servant, who works closely with minister Brian Lenihan, assured IL&P he understood why it was necessary to carry out the transactions and there was no need for concern over the arrangements.

An internal audit report compiled by Anglo's audit department includes an account of a meeting attended by the official at the Department of Finance with IL&P on 22 January. The building society said it took a "lot of comfort" from the meeting and they were left with "the clear impression that they should not be worried about it".

The report does not say whether the official discussed the issue of transfers between the two banks with minister Brian Lenihan subsequently. But in relation to the official's discussions with IL&P, it states: "He acknowledged that the bank had taken them through the transactions previously and that the Department of Finance understood why they were entered into. They left with the clear impression that they should not be worried about it."

For clarity, at no time did the Department of Finance approve of the transaction in question.

"As previously stated, when this matter came to the department's attention during the PwC review it was referred to the Financial Regulator for further investigation. The department never approved of this transaction."

The Sunday Tribune has seen a copy of the audit report and transcripts of the phone calls between Anglo Irish and the Financial Regulator concerning the arrangements. The explosive contents are likely to heap pressure on the government to immediately reform and restructure the Financial Regulator and to give a detailed account of whether Department of Finance officials provided approval, even in retrospect, for the transfers.

Very few of them have any integrity or morals! A person of integrity wouldn't have to be told that claiming on the double was morally wrong! No matter what they were entitled too!This pair should take a walk around Dublin at night and see some of the poor unfortunates who haven't a roof over their heads.

The real issue here is the perception that Anglo Irish is ready and willing to write off loans to developers and the so-called Golden circle, while being funded (or compensated) in order to do so by the taxpayer. The reason for this is because the public who are paying for this cannot see the accounts. The same public who are being gouged by their own lenders (same banks) for home loans in negative equity. Meanwhile a certain bank (I shall not name it) has asked a database reports specialist for a full report on the borrowings of every single person known to be working at a certain Limerick manufacturing facility which is earmarked for closure with 100% redundancies, presumably so they can target them before they even get into difficulties, like vultures ready to swoop. So the banks are targeting the little guy while writing off loans to the "elite", paid for by the taxpayer, meanwhile Irish economy is teetering ever closer to the brink of collapse. Lets face it, Anglo Irish is no longer a viable bank, the only way to gain any credibility is to publish both its accounts and the report on it in full. Otherwise this will bring down Ireland Inc rapidly.

Please please please for the sake of our collective mental health, stop showing smiling pictures of 'Seanie' Fitzpatrick. It's doing nothing but adding to the general malaise that the ordinary people of this country are now feeling and it certainly won't right the wrongs of Ireland's corporate croynism.
To close, I wonder will the events of the past 5 months finally put paid to the misconcieved belief that Bertie et al were the architects of a 'boom' in this country.

Worse is yet to come!
Why does the dept Finance even bother to lie about this?

The names of four of the so-called "Golden Circle" have been printed in the Sunday Times so its only a matter of time now before it all hits the fan. The show has only just begun. Jaysus wept.

Laura has articulated the situation quiet well. The goverment is clearly creating a smokescreen in order for their mates to abscond with the loot. The economy will collapse, there is now little doubt but I doubt it will be safe for those who caused it to reside on the island

Heidi is the proprietor of a bar in Berlin. In order to increase
sales, she decides to allow her loyal customers - most of whom are
unemployed alcoholics - to drink now but pay later. She keeps track of
the drinks consumed on a ledger (thereby granting the customers loans).

Word gets around and as a result increasing numbers of customers flood
into Heidi's bar.

Taking advantage of her customers' freedom from immediate payment
constraints, Heidi increases her prices for wine and beer, the
most-consumed beverages. Her sales volume increases massively.

He sees no reason for undue concern since he has the debts of the
alcoholics as collateral.

At the bank's corporate headquarters, expert bankers transform these
customer assets into DRINKBONDS, ALKBONDS and PUKEBONDS. These
securities are then traded on markets worldwide. No one really
understands what these abbreviations mean and how the securities are
guaranteed. Nevertheless, as their prices continuously climb, the
securities become top-selling items.

One day, although the prices are still climbing, a risk manager
(subsequently of course fired due his negativity) of the bank decides
that slowly the time has come to demand payment of the debts
incurred by the drinkers at Heidi's bar.

However they cannot pay back the debts. Heidi cannot fulfil her loan obligations and claims bankruptcy.

DRINKBOND and ALKBOND drop in price by 95 %. PUKEBOND performs
better, stabilizing in price after dropping by 80 %.

The suppliers of Heidi's bar, having granted her generous payment due
dates and having invested in the securities are faced with a new situation. Her wine supplier claims bankruptcy, her beer supplier is taken over by a competitor.

The bank is saved by the Government following dramatic round-the- clock consultations by leaders from the governing political parties. The funds required for this purpose are obtained by a tax levied on the non-drinkers.

Finally an explanation I understand ...

Ireland's financial standing has been seriously damaged for the next five to ten years. As those responsible are unlikely to step down, all Fianna Fáil candidates should be given a vote at the bottom of the voting ballots this Summer.
This will indicate to those outside the Country that at least the people are against such financial recklessness.

Do you honestly believe that in any of the transactions under investigation: The deposits from IL&P and the share purchase by the "Golden Circle" that Anglo didnt cover their backs by getting approval from the regulator/department of finance?

Anglo has become a political football, and now owned by the Government cannot respond properly to any of the accusations being levelled against it.

The truth will come out and we will find out about the inept failings of the regulator and the mistruths and lies of the politicians rather than any sort of corporate corruption at Anglo.

Looking at any financial institution at this point in time how could anyone say any bank is solvent or viable, however, judge the Banks that can make it through the cycle, at the end... I think you'll find any loan losses at Anglo are more than comparable to the better performing banks.

I bet the bankers don't get to share the cells with the old-fashioned bank robbers who only managed to "borrow" 7 million!

The current political drift, and refusal to disclose the "Mastertaxplan" whammy coming down the line, will continue until after the local elections in a few months time.
This is because the country will see an unprecedented turnout of voters during the coming local elections,and the 70% of Fianna fail local councillors who are going to lose their jobs,would translate into 100% if the "Plan" impositions were announced beforehand!