Life of Reilly
For John C Reilly, the Irish kid from the wrong side of the Chicago tracks, life is an equal measure of humour and sadness. That's why every joke has a little bit of truth behind it, he tells Ciaran Carty 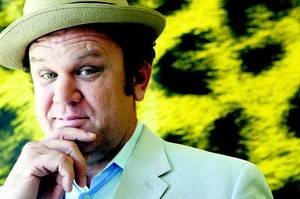 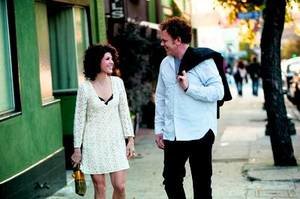 Reilly with Marisa Tomei in 'Cyrus' 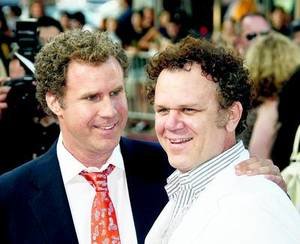 With frequent co-star Will Ferrell

'When I first went to Italy young people seemed to be making out everywhere and kissing all the time in the streets," says John C Reilly. He's in the Piazza Grande in Locarno, a cobbled square where an audience of over 8,000 has gathered for an open-air screening of his latest comedy Cyrus. "Then," he adds, "I realised it was just because they were still living with their parents and they'd nowhere to go."

Locarno Festival is this year celebrating the full range of a career that has seen 45-year-old Reilly play pivotal roles in three Academy Award-nominated films in a single year – Chicago, Gangs of New York and The Hours – while also being part of a galaxy of actors, including Jim Carrey, Ben Stiller, Will Ferrell, Adam Sandler, Steve Carell and Seth Rogen, who are revolutionising Hollywood comedy.

Locarno is in Switzerland but is vibrantly Italian in language and culture. Reilly's quip about grown-up children not leaving home wins rueful laughter while hinting at the crux of Cyrus, a love triangle in which he plays a divorced man who makes out with Marisa Tomei at a party only to find out when he wakes up in her bed the next morning that she lives alone with a cunningly possessive twentysomething son (Jonah Hill).

Chunky, freckle-faced Reilly, famously betrayed by Renee Zellweger's star-struck wannabe actress in Chicago, hardly fits the popular image of romantic lead: he's more the guy you grew up with next door. "I don't find it so surprising," he says, taking mock umbrage over coffee the following day, "and nor does my wife."

He's played a romantic lead before, wooing and winning Gwyneth Paltrow in Paul Thomas Anderson's Hard Eight, one of the films showing in Locarno's retrospective of his work. Anderson went on to cast him as a pornographic film star in Boogie Nights and again in Magnolia.

Cyrus is a surprise summer hit for Fox Searchlight and young New Orleans directors Jay and Mark Duplass, best known for their $15,000 Sundance Festival favourite The Puffy Chair. (Mark also popped up as Ben Stiller's tormentor in the recent mumblecore-goes-mainstream comedy Greenberg.) Cyrus is largely improvised and shot in chronological order. "Jay and Mark wrote a script, and then every day they came on the set and said, 'Don't say any of it, you know the direction the story is heading. Put it in your own words and find your way through it. Go with your instincts.'"

Typical of their unorthodox approach, they wrote Cyrus specifically for Reilly without telling him beforehand. If he'd said no they'd have been left without a film. It wasn't written as a comedy but as a story of everyday American life. "We weren't encouraged to be funny, but to just be as truthful as we could. I was forced to be very honest every day and to bring a lot of myself to the role emotionally. It took a lot of nerve, but it was good for a change to play someone who is my age and has some maturity. It was a chance to bring out my own voice and my own point of view rather than just transform into what a script needed me to be."

Comedy to Reilly is drama by other means: he rejects the idea that serious drama is somehow a higher form of acting. "For every sad situation there's a little bit of humour. Growing up the fifth of six children in an Irish family in Chicago, there was always a good laugh at a wake and a little bit of sorrow at a birthday party or a wedding. That's just the way life is. My aim always with characters is to make them more resemble life. I'm turned off by movies that just rub your face in 'reality'. I don't think unremitting sadness is honest. The way people in different circumstances get through life is to have a sense of humour about it. Every joke has a little bit of truth behind it."

What kind of Catholic upbringing did he experience? "It wasn't kind of Catholic, it was Catholic. There was a lot of trouble in my neighbourhood. Getting accepted into Edmund Rice Christian Brothers High School took me out of that. It was an hour from where I lived. Suddenly I had new friends and people who had much higher academic standards. I was dressed with a tie and taught self-respect. For all the bad reputation priests and brothers have these days, I'll always be grateful to them.

"Movies I do, like Step Brothers, are about guys who never become men. But the Christian Brothers' motto was if you went to them as boys you were going to be men when you left, so get ready."

He grew up listening to the Clancy Brothers. "That music had a huge influence on me. I met Tommy Makem when he came to Chicago. To us he was like Pavarotti. My father had this very romantic notion of Ireland, more Irish than the Irish. It was funny for me to go there and find such a cosmopolitan, globalised country."

He hadn't met Marisa Tomei before Cyrus. "I usually make an effort to spend time with people I act with. For instance I really pushed for Catherine Keener to play the part of my ex-wife because she and I are old friends and that would help create a sense of history between us.

"But Jay and Mark kept me away from Marisa until we had to do our scenes, so we only got to know each other in character. It was a great idea, except the way the story goes we meet at a party, go home that night and the next thing Marisa's lying on top of me, totally nude. So it was a little stressful. It had all the awkwardness and discomfort of a new sexual encounter and none of the pleasure, just the parts that are difficult and none of the parts that make it easier."

He catches Tomei's interest at the party by telling her she's beautiful, whereas he's like Shrek. "It just leapt out of my head and the moment I said it I knew people were going to be asking me why I feel like Shrek for the rest of my life. That's what happens when you improvise, you sort of turn on the faucet and things just start coming out. Mind you, my wife says I'm better looking than Shrek."

He's done bits of improvisation in all his films. "The script may say one thing, like this scene where you're interviewing me is taking place in a round room, but here we are in a rectangular room, so you can't stand where it says in the script, you go over there, and we're already improvising. We're always shaving off the ends and adding little bits here and there, but you do it more with some directors than with others."

Take Woody Allen on Shadows and Fog. "I remember him saying, 'Shake it up a little, say what you like', but when I did, he came over and said, 'What are you doing? That's not the line.'"

It was different playing a cowboy in Robert Altman's last film A Prairie Home Companion. "The character was based on a character Garrison Keillor had done on his original radio show, and I was a fan of that. So I'd ring up Bob asking, 'Do these guys believe they are cowboys or is it just an act?' 'Listen, John,' he said, 'Don't worry about that. When you get here you're going to see how we work and everything is going to be fine.' When he started shooting he had four cameras going and you never knew whether a camera was on you or not, or your voice was being recorded or not, you just began acting, and suddenly I realised it was okay, he was just creating an environment for great things to happen."

After that, Adam McKay teamed Reilly with Will Ferrell in the inspired mayhem of Talladega Nights. Jake Kasdan cast him as the lead in the music satire Walk Hard: The Dewey Cox Story. He's just finished shooting Cedar Rapids, a comedy about a smalltown insurance salesman with Anne Heche and Ed Helms from The Hangover, and We Need To Talk About Kevin, adapted by Lynne Ramsey from Lionel Shriver's novel about a mother's version of her son's massacre of students and teachers at his high school.

"You couldn't have more different films. If I have any magic formula, it's just keep surprising people and don't repeat yourself. Every time they think they've got you pegged slip out from under their finger and pull a fast one. Don't let people get to know who you are."

'Cyrus' opens in Ireland on 10 September