'You have to be prepared to take accusations of racism, of misogyny'
His Booker-nominated novel 'The Slap' has provoked disgust for its language and obsession with sex but Australian writer Christos Tsiolkas is unapologetic, he tells Valerie Shanley. Portrait by Lar Boland 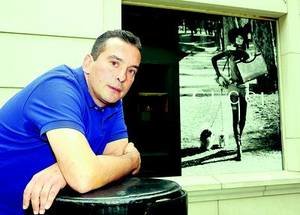 Christos Tsiolkas, author of The Slap: 'We do ourselves no favours in denying the aggressiveness in male sexuality. Life is so much more complicated behind the politically charged terminology that doesn't permit engaging honestly with an issue' 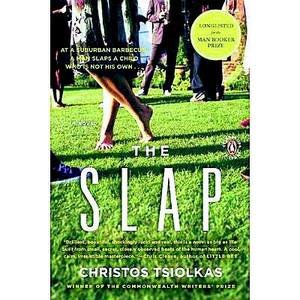 Amid all the lavish praise, there is one criticism of The Slap that suggests our interview should take place well out of earshot of the other hotel guests. One reviewer of the Booker-nominated bestseller claimed it had such an obsession with bodily functions and sex they "felt soiled after reading it". Then there's the accusation of the novel being "unbelievably misogynistic". True, there has been the less critical comparison with the soap Neighbours, also set in Melbourne – but it's hard to recall any character in Ramsey Street seething with such lust, or indeed using the 'c' word. All of which makes an interview with the book's Australian author, Christos Tsiolkas, a slightly apprehensive prospect.

But in person, this 44-year-old of Greek extraction is warm, engaging, and so softly spoken there is no fear early morning diners will choke on their cappuccinos. Making wrong assumptions about people is one of the themes in The Slap. The title refers to the incident at the beginning of the novel, which drives the stories of the characters who witness it. The barbecue setting, with its mix of friends, family and cultures, provides a microcosm of modern Australia in all its ethnic diversity. An annoying child is slapped by a guest, and Tsiolkas uses individual reactions to explore testing relationships.

The Aussie 'barbie' is a cultural stereotype, but who are these people in this new Australia? Among the eight characters are a lecherous but happily married son of Greek parents; an Aboriginal convert to Islam; a teenager with a hidden passion for his best friend; and an 'earth mother' still breast-feeding her three-year-old child. Because Tsiolkas says he writes in the language people speak, he uses words that could be described as either colourful or offensive. Does he feel political correctness bearing down on him?

"In Australia, there are so many people from a different heritage to what others may think of as authentically Australian. I actually didn't learn to speak English until I started school. I was living in a very heavily influenced Greek, Italian and Slavic community. For a long time, because of the colonial heritage, there was a constant looking towards England as the mother country. But for me, the mother country was Greece. So I wanted to really think about how these diverse people, from all over Europe and beyond, really speak. Of course, I am very conscious of political correctness. But I realise that in Australia we have become quite used to a particular way of expressing things – there is a slang to the vocabulary. To my parents' generation, the word 'wog' – which characters in the book use frequently – is so, so insulting. But my generation has started reclaiming it. What I'm trying to do in using these words is to expose that underneath the supposed liberality and egalitarianism, there is quite an ugly thing going on."

He was recently asked by a Scottish person if he believed Australians were more racist than British people. Yes, they were, he said. But qualified it by saying Australians were also more honest.

In all of his books, he says, he strives for an emotional truth rather than making ideological statements. He doesn't shy away from the physical either. How confident is he writing sex scenes? Never mind the Booker – does he fear he'll be a nominee for the Bad Sex in Fiction Awards? That he'll get it terribly wrong?

"I once had mentor who used to say, 'Christos, you can't stand over the shoulder of every reader and say 'No, No, that's not what I meant there'. As a writer, you have to learn that people may mis-interpret. The Slap is a book about relationships. Sex is a part of relationships. The difference between the way men express sexual desire and the way women do is fascinating to explore. And yes, there was a fear of 'could I be convincing?' whether it's the voice of a man, the voice of a woman, or of a teenager. But if I can't do that, if I can't imagine those voices, then I shouldn't be a writer."

Tsiolkas talks about his other mentors – three women writers with whom he has a close bond and who put him right about any expressions of female sexuality that don't sound authentic. He trusts them, too, to alert him to anything that reads as deliberately misogynistic. Someone sent him a link to the criticism by journalist India Knight of The Slap, but he said he stopped reading it when she made comparisons with a recent murder case. There's a subtle difference between a book with a misogynist character and a book that's purely misogynistic, he says. Knight had commented: "The whole novel has this ludicrous, comedy-macho sensibility – you get the feeling that if he'd been forced to read 'literary' fiction, [murderer] Raoul Moat would have gulped it down in one sitting." Tsiolkas says that by linking his writing to the mind of a psychotic killer, Knight ruined any argument she was trying to make.

"She took a very tragic situation to make an attack on me. You have to be really careful if accusing someone of being a misogynist or a racist. You have to be very, very certain of your intellectual argument that backs that up. But to address her criticism, we do ourselves no favours in pretending that men act one way and think another way. We do ourselves no favours in denying the aggressiveness in male sexuality. Life is so much more complicated behind the politically charged terminology that doesn't permit engaging honestly with an issue." He argues that contemporary writing should be about how we live now. But people , especially women, have become "a bit lazy, a bit safe" in what they are reading. Beautiful writing is wonderful, he agrees, but it's also good to be challenged.

"When I think of some of the books I've read that have made me feel really alive, they are not only the books that have moved me because of their beauty. There are books that have angered me, that have challenged me. They made me furious that I've ignored something about myself. Writing should make us examine the assumptions we make about one another, our relationships with one another." Tsiolkas knows he is in danger of getting it wrong. But human relationships, in all their glory, in all their flaws, are what inspires him as a writer. The Slap's nomination for the Booker Prize has caused controversy – all to the good in terms of publicity. But he is aware it is a very polarising book because of the brutally honest language.

"Sometimes it feels as if we still don't have the words in our language to talk honestly about diversity. But if you write about these things, you have to be prepared to take accusations of racism, of misogyny, and be prepared to defend them back. If you are not allowed to be honest about these tensions that exist in a multi-cultural society, then you are just sitting on the fence. Although all of the characters in the book act hypocritically to a degree, I have an understanding of them. The world is not divided equally into the good guy and the bad guy. We have to work hard to conquer feelings of racism, of misogyny. You can't negotiate life in a multi-cultural society if you stand back from it. You have to deal honestly with prejudices within yourself."

The son of Greek emigrants who came to Australia in the 1940s, he grew up in Melbourne, where his parents worked hard to give him a good education. At university, Tsiolkas fell in love with his room-mate, Wayne, with whom he is still in a relationship 25 years on. It's not hard to imagine just how difficult it was to come out in the mid 1980s, defying the convention and tradition of society in general, and his family in particular.

"It's true that Australia is such a sports infatuated nation, so you could certainly describe the culture as macho. Not only was homosexuality at odds with that very masculine Australian image, in traditional Greek culture there is also that strong awareness of shame and honour within family life. And coming to terms with sexuality is never an overnight process.

"For me, reading so many books that showed there were other worlds, other lives, gave me the courage. I had choices. I could either live a totally hidden life, or I could just keep it from my parents. I didn't want to do either. And it gives a young person great courage to come out in such an environment. To show that being gay is not just about the act of f***ing. And it was a huge mark of courage by my parents in how they dealt with those initial feelings of shame within the community. But it was difficult. I feel that what that struggle gave me was a fully adult relationship with my parents. Very often, in traditional cultures, you keep being the child."

The next wave of young Australians, Tsiolkas believes, will be no longer scared of difference, and will seek a common humanity. His generation, who grew up in the '70s and '80s, too easily accepted the absolute moral dictates of the time, he says. There's awareness now that the old systems are collapsing.

And interestingly, he feels more open attitudes are being fostered not by fiction, but by television. He laughs about his appreciation of cult US animation series such as Family Guy. "That series is much more radical, much more dangerous, than a lot of contemporary fiction. And South Park too, for example, has a black kid called Token which really sends up feeble attempts at liberalism. A teenager watches these shows and sees how outlandish jokes are made about sensitive subjects, but the point is the acceptance of these subjects as normal. And I'm more excited about The Sopranos, The Wire, or Six Feet Under, than I am about characters in contemporary fiction, which is often too safe. These programmes are more incisive, more honest about what is going on."

For now, the incisive and honest Christos Tsiolkas is intrigued by the phenomenal global success of The Slap. Yes, life is good... and he adds something else in that gentle voice. But it's carried away in the clatter of the nearby table.

What's that you just said?

He laughs, and then repeats: "I'm a jammy bastard."