Conor McMorrow - Unlike Britain, we don't have an official honours system here – just a cute hoor/jobs for the boys kind
While we may have escaped the appalling vista of a Sir Seán FitzPatrick, the government still finds other ways to reward its loyal supporters 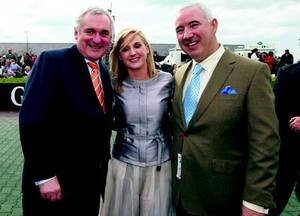 CAST your mind back to Ireland in 1999. Five hundred thousand people 'invested' in Eircom shares, the government spent a small fortune posting millennium candles (that would not fit through letterboxes) to every home in the country and Uncle Gaybo bid farewell to the Late Late Show.

A less remembered event from that year was a cabinet decision in September that taoiseach Bertie Ahern would write to opposition party leaders and invite them to contribute their views on establishing a civic honours list to acknowledge those who had made a major contribution to Irish society.

Most other countries have a formal scheme to honour the contributions of its citizens. Queen Elizabeth will reveal Britain's 2011 New Year honours' list in a few days. Those in favour of a similar scheme in Ireland cite the fact that Irish-born citizens like Terry Wogan, Pierce Brosnan and Bob Geldof are among those to have received honours from Britain.

Fine Gael and Labour initially welcomed Ahern's 1999 invitation but in the end the taoiseach's aim to bring in a state honours scheme failed to win all-party support. Fine Gael opposed the scheme at the time because its frontbench decided "an honours system was foreign to our traditions and essentially more trouble than it was worth".

Despite this knock-back, Ahern persisted with the idea and in July 2006 he raised the prospect of a state honours system for a second time. In fact, five of the seven Fianna Fáil taoisigh, excluding Jack Lynch and Brian Cowen, have sought to introduce such a scheme.

Just as Ahern launched his second bid to establish the honours system, then Labour Party leader Pat Rabbitte described it as "a lot of blather", claiming: "we don't need to ape the British system". He warned that establishing a system on a party political basis would leave open the potential for "awarding gongs" to people because of their political associations. Ahern's second attempt to start the scheme proved futile.

The American film director Billy Wilder famously coined the phrase "hindsight is always 20-20" and in 2010 that mantra certainly rings true when you think of the names that could have been on the honours list had Ahern got his way in 1999 or 2006.

The queen's honours list, which is published in the New Year and in mid-June on the date of her official birthday, honours people from various parts of society, including the world of commerce. So had the scheme been initiated in 2006, before the economic bubble burst, one can only assume that by now Ireland would have had its own 'Sir Sean FitzPatrick', 'Sir Michael Fingleton' and so on.

In April 2008, when Ahern became the sixth Irish leader to address a joint session of the US Congress, he invited Sean 'The Baron of Ballsbridge' Dunne and his wife Gayle Killilea to attend.

The property mogul was also present at the Royal Gallery in the Palace of Westminster in 2007 when Ahern joined the list of global dignitaries, such as Nelson Mandela, Charles de Gaulle and Ronald Reagan, to address both houses of the British parliament.

Given the high esteem in which Ahern obviously holds Dunne, one can only assume that if the honours system had been given the go-ahead in 2006 then the couple, who quit Ireland for Greenwich, Connecticut, after the property crash, would now be known to their American neighbours as 'Sir Sean Dunne' and 'Lady Gayle Killilea'.

So just four years on, Pat Rabbitte's view that plans for an Irish honours system were just "a lot of blather" seems to have been on the money.

But the reality is that Ahern and the numerous other taoisigh who advocated an honours scheme were merely trying to make our existing honours scheme official.

No one should be in any doubt that we have an honours system. It exists in all but name, and it has been extremely prevalent in recent weeks.

Appointments to state boards are effectively the Irish answer to Britain's honours scheme. It is a 'cute hoor/jobs for the boys' system.

Since the Green Party announced its intention to pull out of government in November, 35 appointments and reappointments have been made to state boards. And according to information dug up by Fine Gael TD Leo Varadkar, the government is to make almost 300 of these appointments before it leaves office in the spring.

While most of the positions are not remunerated and only offer travel and subsistence expenses, they do bestow kudos as they can open up doors for board members.

Jackie Gallagher, a public relations consultant and former special adviser to Bertie Ahern, has been nominated to the board of Trinity College Dublin. Gerry Horkan, a Fianna Fáil councillor in Dun Laoghaire-Rathdown, was recently appointed to the Dental Council. And barrister Rosemary Healy-Rae was reappointed to the Criminal Injuries Compensation Tribunal on 11 November. She is the daughter of independent TD Jackie Healy-Rae, who supported the budget. And the list goes on.

Varadkar claims the posts include "some very lucrative ones and some very powerful ones" and he has called on a moratorium on such appointments until after the election. While careful not to criticise those who have been appointed, Varadkar has made the correct call that there should be more Oireachtas scrutiny of the appointments.

Rabbitte was astute in dubbing the proposal for an honours system a "lot of blather". Let's hope that when Labour and Fine Gael go into government after the spring election, they realise the system of appointments to state boards is also a lot of blather.

While the country is broke and no one is particularly happy that the EU and IMF are here, the current morass does represent an opportunity to eradicate some of the bullshit in this republic. And the state boards may be a good place to start.

Shane coleman is on leave

Even if the honours list proposal is being 'kicked down the road' for the moment - I don't see why we can't name a wing in Arbour Hill Prison after Ray Burke.

Just look at those rogues with de bertie, the media balderdash of the day, describing this lot going in and out of eateries at our expense, & now they have fled to the US, how did this happen, where did the visas come from. & what about their length of stay there. Well Brian, they could name wings landings & slop outs after this lot, most important get them in there.