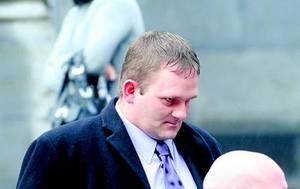 Danny Foley at Tralee court house last year: there is no suggestion that he or his family are aware of or support the intimidation

A KERRY sexual assault victim whose attacker's supporters controversially shook his hand in court, has endured a campaign of death threats and criminal damage since his conviction, the Sunday Tribune has learned.

The woman, who has a young son, had the front door of her home in Listowel kicked in last weekend by supporters of bouncer Danny Foley. She has also received several phone calls in which callers have told her they will "pay her back" and have "bought coffins" for her and her son. Gardaí are investigating the matter.

The callers making death threats have told the 23-year-old woman that her son's life is "in her hands" as a result of Foley's conviction for sexual assault. Those telephoning the young woman have been clear that the reason for the threatening phone calls is "because of what she did to Danny Foley".

The young woman's house has been targeted on at least four occasions – the side door of her home has been repeatedly kicked in an attempt at intimidation and the downstairs windows have been banged on. These incidents have made her fearful for her safety and that of her son.

The situation came to a head a week ago last night. The young mother and her son were not home when the front door was kicked in. Nothing was stolen from the house, but this incident, as well as the threatening phone calls and attempts at intimidation, are being investigated by gardaí. It is understood that the campaign of intimidation, death threats and criminal damage is being taken extremely seriously by senior gardaí.

The local council has agreed to install lights in the woman's back garden as well as a lock on the side door passage at her home. There is no suggestion that Danny Foley or his family are aware of the intimidation and threats or support the campaign against the woman.

Foley (35) was jailed for seven years in December with the final two suspended after being found guilty of sexually assaulting the young woman behind a nightclub in Listowel in 2008. Before he was taken to prison, around 50 of his supporters queued up to shake his hand.

Listowel parish priest Fr Seán Sheehy was forced to stand down after he provided Foley with a character reference and went on radio following Foley's sentencing and spoke of the "alleged assault".

Foley's victim later said that she had felt intimidated in court. She said that some of the group of 50 people who shook his hand gave her "dirty looks" and were staring at her. She said that shortly after the case she was refused service in the chip shop where Foley had worked.

However, five months have now passed since Foley was jailed and the young woman enjoys the support of the vast majority of locals in Listowel. Shortly after the controversy became a national media story, the woman said the whole experience was "terrible" but she was not sorry she went to court.

She encouraged any other victim to come forward and report an assault and said there was support out there for people who had been attacked in this way. "When you say 'no', no is no and whoever won't take 'no' for an answer, they are taking advantage," she said at a press conference. Foley has since withdrawn his appeal against his conviction.

Kerry again, The Bull, McCabe, The Field, The Healy Raes. John B come back

danny foley was jailed for the sexual assult of the young lady,end of story.any one who make threats against her face the rigours of the law.

What the hell is wrong with these deluded donkeys,the guy is guilt of sexually assaulting a young woman,instead of boycotting this scumbag they side with him and intimidate this poor girl,they are as bad as he is,hateful cowardly throwbacks the lot of them.

To the young woman who was the victin of this horrible crime, if you're reading this, keep your head up. You did the right thing. Don't let some parasites ruin your life.

Senior gardai are very concerned? They should be concerned for their jobs at their failure to protect this woman and allow such anarchy in a small rural community. This is not New York or Kingstown Jamaica. This is as fundamental a challenge to the rights of a citizen as you could imagine, to the rule of law, and Ireland as a civilised country. If this story is true, and it's a campaign, this has been going on for some time. Listowel is not that big a place, and the sewers or bogholes where those who'd intimidate this women lurk an even smaller place where it should be easy to find those who hide there. This woman should be offered 24-hour protection if she wants it, and those involved in intimidating her should be jailed, for a very long time. Incidentally, it's mind-boggling why the press has not published the names, addresses and professions of the 50 or so men who queued up in court to shake hands with the sex attacker's in front of her victim. If we read about this in Afghanistan or Pakistan, we'd say what a shower of savages. We are no better. In times when finer Kerrymen lived in that county - "the men who dared the Auxies and fought the Black-and-Tans" - these big men so brave as to insult a woman sex-attack victim like this would be heading on a one-way trip to Holyhead - if they were lucky. Scum.

Isn't is sad that in 2010...Ireland has still got thicko's & feral thugs roaming around with disregard for the law? For every threat these thicko's make against the victim...the feral thug in prison should get at least another 2 years added to his sentence. That would soon stop all the thuggery regarding this case.

This appalling abuse of citizens' rights is a prime example of how the Irish Police Force are weaklings, full of their own importance, yet ineffective for the most part. The victim in question should receive support and spot surveillance, not just lip service. Ireland may have changed, yet the same old dark ages "small minded" mentality remains alive and well. We send troops overseas to protect others, yet women in Ireland, especially in rural parts, are nothing but second class citizens in the eyes of many. Time Law and Order was enforced and not just for a select few!

When are we going to accept that inbreding is a major problem in our society ? Population 4.3 million people, tiny island etc. Ireland is a nation with a limited gene pool. We have to finally accept that cousins are reproducing with cousins and the results are not pretty. We have to finally acknowledge why little Johnny walks around with a constant smile looking up at the sky.

Just take one look at the guy (duelling banjos play in background). This shouldn't surprise anyone. It's time that people boycotted the upcoming Listowel Writers Festival and hurt a complicit community where they'll really feel it - in the pocket. Of course, our great community of writers and artists in Ireland have kept their mouths shut and articles unwritten about this one, haven't they? The only one with any courage to mention this was media Mary Rafterty, champion of the abused.

A huge percentage of Irish people are backward, a little slow. We live in a country that elects such clowns as jackie Healy Rae, his son, Jim Mcdaid, BBertie Ahern, Mary Coughlan,Eamon O'Cuiv Conor Lenihan, Martin Ferrett , Tom Mcellistrim, Martin Cullen (at least he's gone) and a host of other gobdaws. We continue in 2010 to elect papil on the basis of whose side dere grandfadder fought in 1923. I agree with Paddy DM regarding the inbreeding that transpires on this rock. We have to acknowledege this situation and its contribution to the situation this poor lady in Listowel is subject to. Mucksavage morons, 60 % of us.

What is wrong with this tribe of backward inbreds ? They are like morons coming down from the mountain with lighted lamps.

a character reference from a priest? is it a case of sex offenders sticking together? they pick on her because she has no male relatives with backbone to defend her.

Of course Listowel Writers festival should be boycotted. So should any other festivals in that town, for the next ten years. I would also recommend boycotting the county itself, to try to break this sick collusion.
Michael OB is right. Look at the photos of Foley. He looks out under his eyebrows like a mad bull.
Is it a coincidence that the priest and a gang of locals shook his hand after the guilty verdict in the same country awash with cases of priests raping children for generations past?
I wonder what kind of a society we really are, under the shiny exterior?

Jack still thinks Ireland has a'shiny exterior'.I was always taught not to judge a book by its cover but I think in this case your judgements might be logical.

Surely our Government could make contact with the Taliban and offer to offload these Neanderthals to Afghanistan where they would fit right in with the prevailing mindset. Also they could throw in Jackie himself as a stand-up comedian as that is what he seems to be best at. Actually, they just might understand him as I certainly don’t.

This is exactly the type of mentality that goes with abuse its called denial. It runs rife in Ireland and people have stood still and known what was going on for years. To the young woman , you are amazing and your son is very lucky to have such a great role model. To supporters of the accused shame on you , Irish women and men do not need this kind of attitude towards women. You need help.