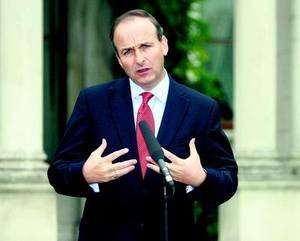 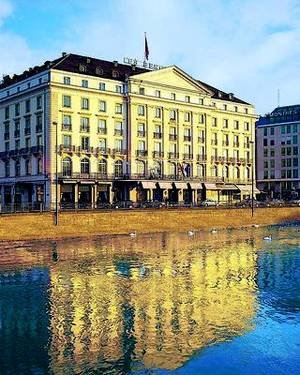 The Hotel de Bergues in Geneva

A hotel suite for minister Micheál Martin cost the taxpayer more than €1,900 a night, records have shown.

The room, which came to a cost of €3,843 over two nights, ranks as probably the most expensive room ever booked on behalf of an Irish government minister.

The bill was amassed at the luxury Hotel Des Bergues in Geneva, Switzerland, where Martin stayed during a meeting of the World Health Assembly.

Martin, who is considered one of the frontrunners to succeed Taoiseach Brian Cowen as leader of Fianna Fáil, was minister for health at the time of the trip in May 2004.

The Cork minister, who is now minister for foreign affairs, has until now almost entirely avoided any criticism regarding his travel arrangements.

However, details have now emerged of high expenses Martin incurred on official business abroad while he was at a different department, following publication of the political expenses book Snouts in the Trough.

Overseas travel for the then health minister and ministers of state at the Department of Health cost up to €20,000 a month.

In April 2004, the final bill for Martin, two junior ministers and some advisers came to €17,855, excluding flights.

On a trip to Prague that month, a total of €3,557 was spent by Martin and his delegation at the Hotel Intercontinental in the Czech capital.

Also paid out on that trip was a €48.43 bill at Tesco for "personal items" for the minister, including toothpaste, deodorant, body milk and razor blades.

The bill was tiny, however, when set against the cost of a limousine on a trip to San Francisco for St Patrick's Day that year. Booked through Carey Limousine, the cost of the car came to $12,072 (€9,876) in the space of just four days.

By June 2004, the bills were still arriving thick and fast and the Department of Health's overseas travel spend, not including airfares, was now up to €20,338.

Details of travel for former education minister Mary Hanafin have also emerged: more than €280,000 was spent in three years on the minister, her mother Mona and several civil servants.

Flights for three people to New Zealand, in the company of the President, cost more than €34,000, Department of Education records have shown.

Transport on that trip cost €2,747 while accommodation costs at the Intercontinental Hotel came to €1,110, with some costs understood to have been paid by another department.

This is theft plain and simple. This should automatically eliminate these people from any further career in politics or business. People of Ireland how much longer do we let this happen?