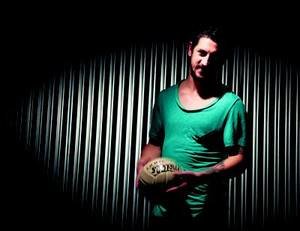 Up clothes and personal: Galvin presented himself as outrageously fashion-forward

It's a brilliant set of couplets, where West's penchant for lyrical esotericism sees him send up both the haters and himself simultaneously. It was hard not to think of that song when watching Galvinised, the RTÉ documentary on the Kerry footballer that aired last week. A Rubik's cube of Sebastian Chabal, Roy Keane and Paris Hilton, Galvin made a mistake that many dubious characters have made before him: he went on television and let people see what he was really like. Naturally, he came off as one of the rather derogatory words in the West song above.

There's only one reason that people like Galvin do this, and it's ego. Perhaps more suited to appearing on Fade Street than The Sunday Game, I'm sure Galvin would like to see himself as the Eric Cantona of the GAA – a reckless genius who is hard done by thanks to the mistakes that infiltrate his unquestionable talent.

Galvin strutted around New York like a waxed chicken fillet in American Apparel gear, his plunging man cleavage presenting a hypnotic sartorial car crash. His metrosexuality is probably unusual in Kerry GAA, but his insistence that he can be himself in New York just because he shops in Topman is pretty sad.

What Galvin wears has been the subject of much slagging, but having a few pairs of shoes and wearing skinny jeans is hardly a revolution. It's not as if he turns up to the All Stars carvery dinner in a dress made from meat à la Lady Gaga (would that make him Lady GAAGAA?). Presenting himself as outrageously fashion forward is embarrassing when his clothes are your regular high-street staples. But maybe things are worse in Kerry than I thought, and perhaps trotting around Lixnaw in River Island's latest is some kind of earth-shattering statement that would get you the same looks as strolling down Dublin's George's Street in assless chaps would. I simply don't know.

But fashion aside, because that's just a distraction, Galvin's real issue is internal, not external. He is a role model for Kerry kids whether he likes it or not, and much like other people who were previously in positions of power and who we were told to respect – politicians, developers, priests and other former stalwarts of communities – Galvin is just another lad who is blinkered by his pigheadedness, and seemingly unable to learn from his mistakes, which pretty much puts him up there with the rest of the leaders in our society. His recent appearance on the Late Late Show showed a nasty side to the way he dealt with his completely unacceptable behaviour on the pitch – namely the notorious knocking of a notebook out of a referee's hand, and brutally fishhooking Eoin Cadogan by putting his finger in the Cork footballer's mouth and twisting his head. "I was trying to shut up him," Galvin joked to Ryan Tubridy when asked about the incident. Ah yes, there's that Kanye West tune again.

He also talked about focusing on things by putting reminders in his phone. "You can manifest the things that you want in your life if you've got the right attitude and you've got a bit of positivity in your life." Wow, so somebody has read The Secret – Blue Peter badge in the post.

But, you know, perhaps I'm being unfair to this neo-GAA character. He's a bit of a fantasist. In Galvinised, he half-joked about heading down to Jay-Z's club and having a chat with the man himself. Cringe.

Galvin is an anomaly in Kerry football in that he actually talks – notably, there wasn't one vox pop from a Kerry teammate in the documentary, meaning that he's very much on his own with this self-publicity drive.

He claims he doesn't read the papers because there's so much rubbish written about him (like him becoming part of the Xposé team on TV3), but in a previous scene, there he was, reading a red top at his kitchen table. Paul Galvin is his own construction. One just longs for a time when bad boys weren't so bloody self-aware.

This year, I've limited my New Year's Resolutions to achievable goals: 1 Become a Winklevoss triplet. 2 Book Diplo to DJ at a rave in the shell of Anglo's "building" in the IFSC. 3 Have my thighs modelled in the likeness of Rihanna's. 4 Star in a 3D breakdancing movie. Will check back in with you guys in December to let you know how I did.

I watched a total of one-and-a-half hours of television over Christmas which was made up of an episode of Fraser and the first episode of Upstairs Downstairs. Remakes of beloved series can always be a bit sketchy, but didn't they do well? For all those who said Downton Abbey was better: did Downton Abbey have a monkey? No it did not. Case closed.

Now, I don't want to get you all excited, but Anni-Frid Lyngstad from Abba said last week that she had chatted to Agnetha Faltskog about a reunion.

Bookmakers believe said reunion could well happen at Boring Will and Boring Kate's boring royal wedding, but who cares? News about the possible return of Abba is the best possible start to 2011.

Why is everyone so caught up with Elton John getting a baby when Hugh Hefner did the exact same thing over Christmas? Oh... hang on...

Paul Galvin is a man more sinned against than sinning. In relation to the Cadogan "fish hook", Galvin attempted to avoid any further tangling with the Cork players. If you watch it on youtube you can plainly see that he did his best as a professional to turn away from the irate Cadogan et al. Have you managed to see the clip where Cadogan and a teammate grab Galvin by the front of his throat? Try it its on youtube also. Again Galvin refuses to be incited to retaliate. I'm from Cork but fair is fair. The man is just someone that a lot of players make a judgement about. Maybe its his looks but there are players out there who I believe choose to feed their spite upon Paul Galvin.

Ya Galvin's alright man.. dont know what this Mullaly girl's problem is .. Maybe he snubbed her or something....scorned fury and all that

This journalist is clearly smart but needs to develope some empathy and sympathy for her job as a national newspaper columinist but then we all have things we're working on.

She's no better or worse than Galvin but she seems to thinks she's better sneering at him just cause he's sensitive to the slagging that undoubtly follows him everywhere in the small country that is Ireland. Growing up as a lad in conservative rural Ireland[although the rural-urban divide is a lot less now in the multi-media age] I have sympathy for him and can understand why he feels he has to get out of the country to be himself [I find London good, a cheaper option than New York though!]

He seems like a normal sensitive lad to me and he didn't look to me like a douchebag or a-hole [or more cuttingly 'sad' because he feels he can be more himself in a big city, a common experience for people who feel the downside of the country]as I have some sympathy with his situation[although the persception of normal is about context so it is easy for him to stand out fasion-wise in a Kerry GAA context].

I like some of what this journalist has to offer but just hope she cutts out the sneering attitude to GAA/rural people who have their flaws but aren't lesser people either.

I apologise if not more coherent/on point but got here through a blog link and felt I had to add a quick! counterpoint to Una's opinion and hope she takes it on board if discussing the strange species that is the rural Irish man again.