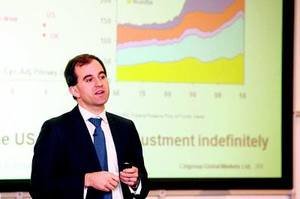 Ireland will enter a new, deeper recession as a result of the austerity demanded by the EU/IMF bailout, according to Matt King, Citigroup's global head of credit strategy.

King told the Sunday Tribune that the magnitude of losses in the economy had not yet been fully realised and that the EU's sovereign debt problem would get worse before it got better, making it harder for corporates to raise money.

"I fear you're only just entering a new recession that will probably be deeper than the one you've just been through, as a result of all the fiscal tightening," he said.

King warned that investors will sell out of whole countries, putting funding pressure on otherwise sound companies. "The only way to escape is to diversify your revenues away from Ireland and try not to be branded as an Irish corporate."