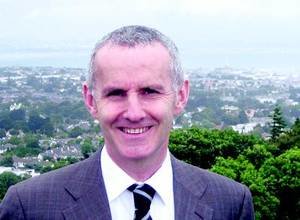 Ciaran Cuffe: 'dug in' on rotation

THE Green Party will this week look to Taoiseach Brian Cowen to get it off the hook created by its internal 2007 arrangement to rotate its ministers halfway through the term of the government.

It is understood that supporters of Ciaran Cuffe have "dug in" and insisted on the deal being honoured, but other party figures argued it was politically impractical. The deal would involve Cuffe taking over at the Department of Environment from John Gormley.

After much behind-the-scenes argument, a compromise arrangement is believed to have been agreed within the Green Party. Gormley has been charged with going to the Taoiseach to press the case for the Greens to get a second junior ministry.

This would be filled by Cuffe, with Mary White replacing Trevor Sargent as junior minister for agriculture and Gormley and Eamon Ryan remaining in cabinet.

This arrangement is seen as acceptable to the Cuffe camp, but there are serious doubts as to whether the Taoiseach will agree to it.

The indications from Fianna Fáil are that with the number of junior ministers reduced from 20 to 15, the initial promise from then Taoiseach Bertie Ahern for an extra Green junior minister after two-and-a-half years no longer applies.

There is an acceptance within the Green Party that their bargaining position is not as strong as it was when negotiating a revised programme for government last autumn.

"We can hardly walk on this issue," one figure said.

Despite signals coming from the party that the rotation issue has been resolved, if Cowen refuses to budge on an extra junior ministry, the original 2007 rotation deal could come back into play.

Supporters of Cuffe, who faces a near impossible battle to be re-elected in what is now just a four-seat Dun Laoghaire constituency, are determined he should be made a minister.

The Sunday Tribune has also learned that Gormley raised the possibility late last year of standing down as leader, but staying on as minister. However, this is no longer seen as a runner.

I have a solution . Its all about Ministerial pensions . So just give all the Greens the pay and pension of a Minister without actually rotating anybody .

Let this be a lesson to anybody who has voted for the Greens .

What a sordid, sleazy bunch the greens are, they want to ensure their last taste of office will ensure all of them will leave with ministerial pensions, and our taoiseach with responsibility for "drift" will agree to any of their demands.The only requirement a green t.d needs to become a minister is to have a copy of "animal farm" on their desk!

The answer is clearly a job share between Gormley and Cuffe.

The Greens...what can I say? Hmm...err...think man, think...oh yea...that this shower of uselessness will soon be a bunch of "Hasbeens"!