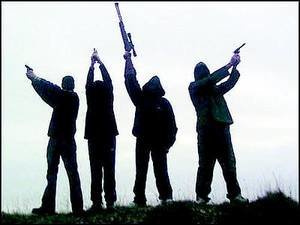 DISSIDENT REPUBLICAN groups, hoping to create a new era of conflict in Northern Ireland, are now recruiting children as young as 13 through a targeted online hate campaign. Youths on the Bebo.com social networking site are being targeted by supporters of the Real IRA, Continuity IRA and the INLA.

In an alarming development, impressionable youths mimicking what they see as "cool" dissident groups have begun posting pictures of friends posing with balaclavas and firearms.

Recently set up pages for a range of dissident groups, which urge Irish youths to "join the struggle", feature prominent displays of armed and masked terrorists in an attempt to glorify political violence.

One page belonging to Na Fianna Eireann, who claim to be the youth wing of the CIRA, features pictures of masked teens posing with a range of weapons stating "don't just talk about freedom, act on it."

Their page includes contact details for the group and asks all users over the age of 16 to send their personal information so they can join up. Another page set up by a group calling themselves the "Killowen Young Republicans" promises to "protect the Republican communities from the PSNI, hoods and most of all loyalists." The group's photo album contains numerous images of youths in balaclavas posing with a range of republican flags as well as a handguns and automatic weapons.

Similar messages are posted to the Dublin youth wing of the INLA's page urging "any youths in the Dublin area aged from 15-23 who would consider themselves supportive of our politics don't hesitate to get in touch and join the movement today."

The group has 500 "friends" added, giving them plenty of scope to promote their message to teenagers across the country.

While it is regretable that children of any age are being recruited for hate groups. One has to remember the words of Karl Marx in one of his letters to Engels "that Ireland is because of its history even more so than Poland one of the few nations in the world that must go nationalist before it goes internationalist"Quoted from the work "Marx and Engels on the Irish Question".