Home News | International | Letters | Editorial & Opinion
$50,000 and you too could turn Bertie...
...away from a day in the Dáil. Former taoiseach now demands whopping figure and first-class flights to give public speech
Ken Foxe, Public Affairs Correspondent 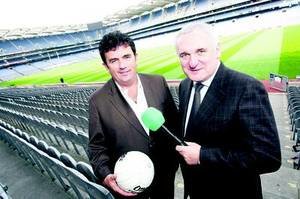 His former colleagues have seen their wages slashed, his successor, Taoiseach Brian Cowen, has volunteered to take a 20% pay cut, while the economy has shed more than 150,000 jobs.

But for former taoiseach Bertie Ahern, there has been no such downturn. The fee to hear the former Taoiseach speak has risen to a whopping $50,000, the Sunday Tribune has learned.

Ahern, who is available for public engagements through the Washington Speaker's Bureau, also requires first-class flights and luxury accommodation before he will agree to give a speech.

The Sunday Tribune tried to book the former Taoiseach to speak at an annual dinner in London on 19 May under the name of the East London Business Association.

We deliberately chose a day on which the Dáil was sitting to see if this might discommode the TD.

Ahern has been classified as a Level 6 speaker, with a standard fee of $40,000, but his fee has risen by a quarter due to demand.

An associate at the Speakers' Bureau explained: "His fee for London is $50,000 plus first-class expenses for two... that would be flights, accommodation, hotel meals, incidentals and then airfare."

Asked whether it was open to negotiation, or any type of haggling, considering the current economic environment, the associate said: "Dependent on how much the organisation can afford, we are always happy to extend an invitation. Ultimately, it's up to the speaker whether or not they can accept or decline.

"And it may work out, if there's an event that he is already there for or what not. We're always open to sending an invitation whatever you guys would like to spend or offer. But we can only submit the invitation once."

The East London Business Association explained that the price may be out of range as our understanding was that Ahern charged less.

"Bertie Ahern, I guess, he would be a level six speaker because it's over $40,000," she said. "It's for three and a half hours' of time. That would include the keynote presentation along with any media coverage, or dinner, or lunch functions. However [you] want to utilise the rest of that time so that's good.

"Dependent upon on how the schedule is or what they'd like to talk about, he could stay longer, dependent on what their needs are. So that's another thing."

Explaining that the date being examined may well clash with a Dáil sitting, we said that Ahern would be required during that day.

The associate said: "Well, currently according to his speaking calendar, he does look to be available for that date. With regards to parliament or anything of that nature, I don't think that that is going to be too much of a problem.

"At least you know the fee involved and he is available. With regards to parliament and everything, if he accepts the invitation, he won't cancel due to a government conflict because he made this agreement prior to that.

"So, he would obviously make his choice around that... but at this current juncture, I don't believe that would [present a difficulty]. That's never happened, that's never been an issue.

"If [you would] like to move forward... [we can] send a firm invitation form. It's basically just a form that we ask all our customers to fill out. It's basically just who, what, where, when, what time does he need to be there, a little bit more information about the organisation, what is the event about, just the kind of the logistical details.

"Then we compile an invitation for the speaker, and make it look beautiful and presentable so that they are more likely to say yes."

The Taoiseach has been in demand for speaking engagements since stepping down from the Dáil and travelled abroad five times last year to the US (twice), Honduras, Nigeria and Spain.

Happy Bertie: How Ahern compares with other speakers

"At least you know the fee involved and he is available. With regards to parliament and everything, if he accepts the invitation, he won't cancel due to a government conflict because he made this agreement prior to that".

Of course it is not a problem sure the saps that voted him in have heard enough of his waffle to last them decades. If he is 'exporting' waffle, sure that is fine.

It takes a certain class of moron to want to listen to a spluttering gobdaw, who with his successor is responsible for the collapse of our economy and the mortgaging of a generation.

Fair play to Bertie, he deserves every cent for his work on the peace process

History will record that he was one of Ireland's best politicians

Sean Lemass would be very saddened and disappointed that an elected politician would not put Dail business first, above personal income generation. The Fianna Fail reputation has been damaged because of the continuing "me fein" attitude of a serving party member e.g whip rounds in Manchester, Tax exemption status for book deals, and public speaking engagements. It has brought public service into disripute.