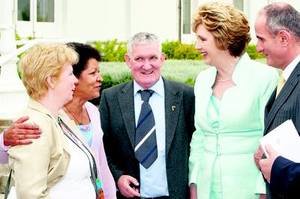 A COMPREHENSIVE survey of Irish survivors of religious institutional abuse living in the UK has exposed the damage caused to their lives decades after they fled the country.

Social housing, medical help, counselling and even pensions legitimised by child labour from the age of 12 are among the list of things survivors believe should be funded by financial contributions from religious orders.

It is believed that around one third of all abuse survivors, some 4,800 of the total respondents to the Redress Board, now live in the UK. Many want help to come home, others say they could never come back.

"I would like to visit my dad in Ireland [but] I could never live there again," said one respondent who took part in the survey carried out by the Irish Women's Survivor Support Network (IWSSN).

Another wrote: "I cannot return to Ireland… it's too damaging."

The survey was designed to address the needs of a substantial amount of abuse survivors who live outside the country and would therefore be outside the financial framework of the Statutory Fund when it is eventually administered. "It is very important to ensure that survivors in the UK have the chance to state their views," said Sally Mulready, a British Labour politician and support worker based in London.

Some 122 detailed surveys were returned from a total of 383 distributed, representing 32% of the sample, a higher-than-average return for such research.

Among the findings, the IWSSN found that one third said they still required funding for counselling, 36% asked for assistance in returning home, 20% requested further educational support for family members and 76% asked that pensions be provided to those forced into child labour.

"Survivors started work at 12 years or older but we ended up with no pensions," noted one respondent.

A large majority felt that the fund should apply to those who had been placed in laundries, a group excluded from the Redress Act 2001.

More than 22% said they were receiving ongoing therapy.

Of those, 44% have been receiving treatment for up to 10 years and 7% for even longer.

Nearly half categorise themselves as disabled, 62% of whom say they need further help with mental health needs.

Accommodation requirements also featured strongly in the findings. Nearly half of those in the sample were in social housing and a quarter said they would welcome financial assistance to return to Ireland.