What will international man of mystery Declan Ganley do next?
People are still wondering who exactly the millionaire anti-Lisbon campaigner really is
Justine McCarthy 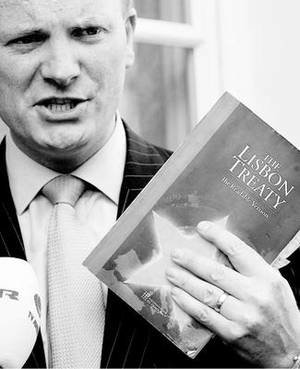 Enigmatic is an adjective that clings like glitter to Declan Ganley. The 39-year-old multimillionaire teetotaller who once upon a time supported the Nice treaty and voted Fianna Fáil has catapulted himself onto the European stage as its most efficacious Doctor No. But in Ireland, after watching him for half a year campaigning intensively against Lisbon, people are still asking, 'Doctor who, exactly?'

The fairytale ingredients of his story have been well aired. His mother came from Achill Island, his father from Glenamaddy. The couple emigrated to England out of economic necessity. Their eldest child spent the first 13 years of his life in Watford before his parents could afford to return to Ireland, settling back into the rural east Galway of the 1980s. Young Declan went to secondary school at the local Mercy Convent where his English accent and his inability to speak Irish or kick a gaelic football marked him out as a foreigner. He yearned to be accepted as Irish but he was at a curricular disadvantage. When, as a teenager, he started cutting turf and selling it commercially and telling his friends about the shares he was buying, they knew he was one to watch.

He came out of his teenage years a devout Catholic with a passion for traditional music and left Ireland to make his fortune. When he came back it was with his American wife, Delia, and a propensity for getting up at six o'clock in the morning to be at work. He has four children and flies the Irish flag on the lawn of his Moyne Park home, which was previously owned by the folk singer, Donovan. It is close to Williamstown where his mother lives. His old schoolmaster was quoted in the London Times during the referendum campaign, saying: "There's a touch of the 'more Irish than the Irish themselves' about him."

The struggle to assert his identity has been the leitmotif of Declan Ganley's life. To many of his supporters, the Lisbon treaty was an assault on the national character. While the talking heads pored over tax harmonisation and how many commissioners can fit on the head of a pin, Libertas, his made-to-measure popular movement, sold the subliminal message that federalism will be the death knell for the eccentric, lovable Irish rogue. But a part of Ganley's own identity remains cloaked in mystery. It is the part of the businessman with the legendary Midas touch.

Two years ago, CNBC estimated his personal wealth at €300m. He is chairman and chief executive of Rivada Networks. The name is an acronym for radio interoperable voice and data application. To put it more succinctly, it supplies phone and IT communications for natural or manmade emergencies. The US military's Northern Command is a big customer. So is the State of Louisiana, which decorated Ganley with a distinguished services medal for his efforts in the aftermath of Hurricane Katrina. Rivada's board has a number of retired US generals, including its vice-president, Rear Admiral Robert F Duncan of the US Coast Guard.

"Did I set out to get the guy on board who was responsible for setting up the Department of Homeland Security?" he asked in an interview with the Sunday Tribune last year. "Damn right I did. I want these guys on board."

The Irishman is well got in the capital of the world's superpower. He took a break from the Lisbon campaign six weeks before polling day to give the keynote speech at a high-powered lunch in Washington sponsored by the Progress & Freedom Foundation, a DC non-profit organisation that promotes free market capitalism.

He built his career as a precocious entrepreneur, whether trading Russian aluminium or telecoms to eastern Europe. At the tender age of 25 he was appointed as economic adviser to the newly-formed government of Latvia, where he sold a forestry business he grew in 1997. Next he started a cable company in Bulgaria and sold it on for €18m. He was less successful with an online jewellery operation that failed in 2000, costing him €7m. Nor has he won his way into Ireland's corporate nexus, his bidding consortium losing out 10 years ago to Denis O'Brien's for the mobile phone licence and, later, failing to secure the contract for the garda digital radio system.

In light of the identity crisis of his early years, it is not surprising that he is protective of his reputation. He has threatened the Los Angeles Times with legal action for writing about a consortium he was part of that pitched for a mobile phone licence in Iraq. No writ was filed. Last week, after Irish times journalist Colm Keena, who had written a hard-hitting profile of Ganley the week before, attempted to interview a Libertas campaigner in Dublin, the businessman hinted at litigation again. "We will be talking to the Irish Times after the referendum," he said when asked about the incident which had turned nasty. Invited to explain what he meant, he repeated what he had said.

Whatever about his past, in his present role as a quasi-political leader Declan Ganley has tapped into a mood in Ireland. An expectation gained momentum during the Lisbon campaign that he would next turn his attentions to the European Parliament elections in 2009, but whenever he was quizzed about his intentions, he replied that he would discuss them after the referendum.

The problem, even for people inclined to support him, is that nobody knows what he stands for or what his vision is for Ireland. Judging by his own life story and by the raggle-taggle right wing he has become associated with in the No campaign, it would not be surprising if he were to promote an orthodox Catholic and Irish ethos, a sort of Dev-with-dosh blueprint for the future.

One looming banana skin on the horizon is the question of how he financed Libertas's referendum campaign. Its expenditure of €1.3m matched the combined budgets of the main Oireachtas parties. With a legal obligation to declare the sources of all donations over €6,000, the Standards in Public Office will not be the only one training a curious eye on the donor list Libertas submits. When invited to explain where the campaign money was coming from, Ganley answered: "We're getting donations primarily from the business community but we have had taxi drivers and grannies giving money as well."

I would vote for him. The alternative for people with reservations about the EU is to vote for SF, and many are understandibly reluctant to do that.

Very smart, but I would like to know his real agenda...tread carefully.

Comes off well, but he's up to something.