Diarmuid Doyle - "Whether the Cowens like it or not, caricature, much of it far more vicious than Conor Casby's, is part of the terrain when you become a political leader" 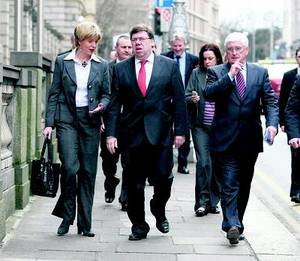 None of us chaps, once we get past a certain age, and unless we're Daniel Craig, looks particularly good in the state of undress for which Brian Cowen has recently become famous. The cumulative effects of gravity, longevity, and years of beer and Wispas wreak havoc on our physiques and leave us open to accusations that we have become chubby, rotund or even fat, although I prefer the world cuddly myself. Only the exhibitionists amongst us, therefore, would relish the thought of having our images hung on the walls of two of our most prestigious galleries.

It should be possible in that light to sympathise with Mary Cowen and other members of her family, who have taken such a dim view of the publication of caricatures of the Taoiseach, firstly in this newspaper last Sunday, and on the Nine O'Clock Moobs on RTÉ1 the following evening. But such personal sympathy should be only a minor consideration in any debate about the outcry which followed. Whether the Cowens like it or not, caricature, much of it far more vicious than Conor Casby's, is part of the terrain when you become a political leader. When, then, somebody manages to hang two such caricatures on the walls of busy galleries within spitting distance of government buildings, a genuine news story has been created.

As the week evolved, this minor act of protest faded in importance compared to the much bigger stories it prompted. The hysterical reaction of government press secretary Eoghan O'Neachtain in ringing RTÉ's director general Cathal Goan was one such story. The gombeen outrage of Fianna Fáil TD Michael Kennedy was another. RTÉ's craven and spineless disowning of their own story was another. The unforgiveable waste of garda resources in "investigating" Mr Casby completed the stupidity. It was hard to avoid the conclusion by week's end that our establishment agencies, our ruling bodies and our political leaders were scarily out of tune with the Irish people who, insofar as it was possible to judge by comments on the Tribune website, to Ray D'Arcy's show on Today FM, and to Pat Kenny, mostly thought that Mr Casby's ruse was a bit of a laugh, which added to the gaiety of the nation at a difficult time.

The various controversies which emerged following the Tribune's story, and RTÉ's development of it the following night, confirmed a lot of what we knew already. Was it news to anybody, for example, that An Garda Síochána can be a ridiculously reactive organisation, responding to trouble – real and imagined – only when the media gets outraged. The people of Nenagh, where a series of assaults was carried out on St Patrick's Day, have Joe Duffy to thank for the arrests which belatedly followed, rather than the crimefighting passion of the local constabulary. They will hardly have been surprised to see detectives show up at Today FM in the midst of a media storm, demanding emails and blaming the "powers that be" for the waste of garda resources.

And who was surprised that RTÉ was willing to whore itself out on behalf of the government? The favours done for Fianna Fáil in general and Bertie Ahern during the last election campaign – Eoghan Harris's lickspittle performance on The Late Late Show being the most memorable – had already marked the national broadcaster out as a servile arm of government. To see station management voluntarily disowning its own newsroom last week was no great surprise, although no less disturbing for all that.

One thing that last week did make clear to us was the lack of any kind of coherent communications strategy, or media management plan, at the heart of the government. One of the likeable things about Brian Cowen is that he is not much bothered about the public relations niceties required of prime ministers these days. He gets on with things – to no great effect at the moment, obviously – and allows others to take care of managing the message.

The problem is that the people doing the managing on his behalf are doing a poor job. Anybody with even the basic knowledge of modern communications, of how a small story can be propelled around the world by a combination of blogs, social networking sites, YouTube and talk radio would have said nothing after RTÉ did its piece on Monday night. By contacting Cathal Goan, and making it briefly seem as though we were all living in Zimbabwe, O'Neachtain gave legs to a story that would probably have gone away. This was a small challenge, and O'Neachtain made a mess of it. It's no wonder the government is finding it difficult to explain the big stuff.

Loans Not Cash: Batt Fails To Line The Coffers

The Department of Finance is reported to be a little miffed that Batt O'Keeffe's plans to reintroduce third-level fees will not be a crude money-grabbing measure, and will instead be a variation on an Australian theme, involving student loans and deferred payments. Meanwhile, O'Keeffe says low- and middle-income families will not be badly hit. Neither will the 500,000 families who will have a member on the dole by the end of this year.

It seems likely, therefore, that the new scheme will raise relatively little money for the state coffers, certainly nowhere near what we were told when O'Keeffe decided to make the running on this issue. It makes you wonder why he embroiled himself in such controversy in the first place.