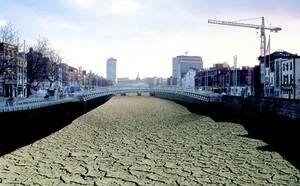 An alternative view: an artist's impression of a drought-hit Dublin

Widespread flooding across the country last week has resulted in one of the wettest Novembers in memory, according to Met Éireann .

At Cork airport, this figure stood at 51.2mm. Overall, figures show that rainfall has been over twice its normal amount.

A report launched last week by the Irish Association of Engineering (IAE) has also warned that Irish cities are set to be flooded on a more frequent basis, unless the relevant precautionary measures are put in place.

Don Moore, acting director of the IAE, said that Trinity College Dublin and Dublin city centre are in danger of being completely immersed as "extreme events" like the flooding of last week occur more often.

"Climate change has begun and once it starts it just keeps going. No matter what we do we are faced with this. Because a lot of our cities are built by coastal lines, it is even more problematic.

"Sea levels are set to rise by one metre, and combined with storms the implications are serious. Taking Dublin city as an example, this rise will mean that the whole city centre has the potential to be entirely flooded. Trinity College, for example, would be completely flooded," he said.

Moore also says that properties in these areas will be more difficult to insure as flooding like that of last week becomes more regular. "The far-reaching implications for this are huge. It goes beyond the incidence of flooding to have an economical effect. "

The report also highlighted Cork as a problematic area. "Cork is very low-lying and will be subject to the same troubles as Dublin. It is clear that we need to identify where the critical structures are, and the areas most at risk. A technical study needs to be carried out by a specific group appointed by the government with this responsibility alone. There needs to be a study carried out before money is spent."

Moore cites the Netherlands as a case study, where they are now faced with an annual bill of €1.5bn to protect against the effects of climate change and flooding.

"It is very obvious that the sums may be just as huge for Ireland. Fighting climate change will become one of the biggest struggles of the century," he added.

John Sweeney, Ireland's leading expert on climate change, said last week's events are not in themselves a sign of climate change.

"This is part and parcel of any normal climate system. It is not indicative on its own of climate change, but we expect to see this happening more frequently which then will be a sign of climate change. What normally happens every 30 years will come to happen every 10 years, and there will be a need to re-evaluate what coastal protections will be needed."

Sweeney points out that it is not a "doomsday scenario" but measures will have to be put in place to tackle the increasing severity of torrential downpours like those seen across Ireland over the last few days.