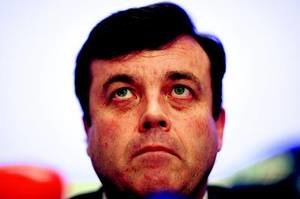 THE government is planning to cut dole payments to young people under the age of 23 by over 20% to incentivise them to get into training schemes as part of over €1bn in cutbacks in social welfare in the budget on Wednesday week.

Ministers are looking at reducing the jobseeker's allowance from €204 a week to €160 for unemployed men and women in their early 20s.

As well as saving tens of millions of euro each year, ministers want to end the current system where young people in their early 20s can get the basic rate of social welfare without having to do anything in return.

Under the proposals being considered by the cabinet for the upcoming budget, young people will keep their existing rate of social welfare if they agree to participate in training programmes.

In last April's mini-budget, the government reduced the jobseeker's allowance and basic supplementary allowance for new claimants in their teens to €100 per week in a move that saved €26m a year.

The cabinet had been bracing itself for a backlash against the move, but it didn't materialise and now the government is looking to extend the cutbacks to those up to the age of 23. The government will not introduce the measure for those over that age because of a belief that beyond the age of 23, those on the dole are more likely to have dependent ­children.

A number of other cuts in social welfare programmes are also currently under consideration by the cabinet, which met again yesterday for four hours to discuss the ­budget.

Further reductions in the rent supplement scheme are also regarded as inevitable as ministers believe the fall in rents in the private housing sector is not being reflected in the amount the state is paying for social-welfare recipients.

No final decisions have been made yet on whether to cut social welfare rates, but with cuts in the child-benefit budget likely to be closer to €250m than the originally anticipated €500m, cuts in rates – with the exception of the old-age pension – look much more likely.

There will almost certainly be moves to reduce the number of cases where people are in receipt of a number of different social-welfare payments.

This was recommended by the report of An Bord Snip Nua, which proposed "changes to eligibility conditions of social-welfare schemes to eliminate second welfare payments, so that claimants already in receipt of a primary weekly social-welfare payment should not qualify for payment under another scheme".

With just 10 days to go to what will be the harshest budget in the history of the state, the cabinet meetings on Tuesday and Thursday this week will be most telling.

"The hammer hasn't dropped yet [on a number of the key issues]," one close observer said yesterday.

While the cabinet could meet again next weekend, the limited time between next Saturday and Budget day means that most of the big decisions must be signed off by Thursday's cabinet meeting.

is it not time that free legal aid was targeted harshly. Every week in the courts of Ireland the same faces are turning up week in week out and are granted aid. A person should get it once and if they keep geeting in trouble then it is up to them to pay there solicitor and the same goes for foreign nationals with free legal aid and also interpreters They are costing this country a fortune when we dont have it . The Mayor of Limerick was right and got hammered for it

The irish government is an absolute discrace targeting the people with no voice who are already struggling as it is. why dont the mp's try living off 204 euro a week im sure they spend that kind of money on a meal. why not tax the high earners im sure they would not miss it and why are we supporting so many foreign nationals if they are out of work for more than a year well send them back to their country an let their government take care of them. The problem with the irish goverment is they worry about what every other country thinks of them and dont look after their own as a result. an hey, so long as they have their bmws and fancy suits who cares about the mental health of those who lost their job as a result of their greed if this keeps up crime will rise and so will suicide, depression, prostitution, and illness THIS MUST STOP TAX THE RICH YOU SPINELESS COWARDS !!

Colm your comment was pretty spineless. Maybe it's time you woke up and had a look around.
If you ever decide to go and work in another country let's hope they look after you after you've spent years paying tax etc.