The Blame Game
AfterTuesday's historic disclosures about the level of dysfunction in Irish banks, where does the blame lie? Solely at the door of the governments of Brian Cowen and Bertie Ahern?
Conor McMorrow, Political Correspondent, reports 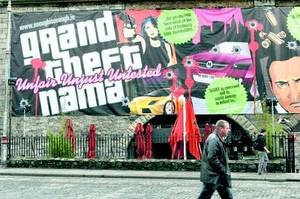 Game over: a billboard trumpets Nama as being similar to the computer game Grand Theft Auto 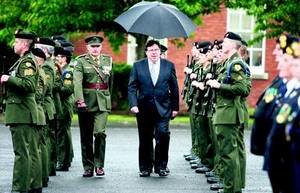 Tuesday's historic disclosures about the level of dysfunction that existed across Irish banks was a sobering day for the nation. But who is responsible? Does the blame lie solely at the door of government of Cowen, and Ahern et al?

Let's rewind a few years to boom time Ireland in 2004.

Cowen pointed out last week that, after he became finance minister that year, he set up a tax strategy group and reviewed all the property reliefs and other tax breaks that were fuelling the property bubble.

Independent consultants such as Goodbody set out how we were going to deal with the situation where we had to move from overdependence on property-related taxes to a "soft landing position".

It is now clear the findings of the tax strategy group were not taken on board as the economy continued with its over reliance on the property bubble. Though Cowen did act upon becoming minister, it appears that he did not do enough.

Newspaper cuttings from 2006 are favourable to Cowen. As the property market continued to boom, Cowen is quoted in the Irish Independent on 16 April of that year advising that borrowers and lenders needed to be prudent and highlighted the risks from general growth in borrowings and rising mortgage debt. He warned that Ireland was vulnerable to "sudden economic shocks" and "we cannot be complacent".

However, on the same day, Taoiseach Bertie Ahern said there "was no great problem" about the level of money being borrowed for property. "If you had taken the advice on the property market given a year ago, you would have lost money," he added.

To blame Cowen for lack of foresight in the finance portfolio from 2004 to 2008 would be wrong when you consider the culture at the time.

His predecessor Charlie McCreevy was an advocate of light regulation in the financial sector and low taxes. Even in his role as EU Commissioner 25 months ago, he blamed excessive rules when commenting on the loss of investor confidence in Northern Rock, and said that had access to analysis of the bank's conduct been "restricted, then the trouble could have been avoided".

Closer to home, the Anglo chairman Seán FitzPatrick would display an incredible level of arrogance and hypocrisy at a business lunch in 2007 when he proclaimed, "In my humble opinion, our wealth creators should be rewarded and admired, not subjected to the levels of scrutiny which known criminals would rightly find offensive."

To blame Cowen would be to ignore the elephant in the room – the then taoiseach Bertie Ahern who was at the helm during the boom.

Addressing an ICTU conference on 4 July 2007, Ahern gave his views on people who dared criticise the economy. He said, "Sitting on the sidelines, cribbing and moaning is a lost opportunity. I don't know how people who engage in that don't commit suicide…"

However, a few months beforehand, as Ahern was fighting to win his third successive election, the policies of Labour and Fine Gael were not exactly crying for a halt to the property bubble.

Fine Gael's election manifesto clearly pledged to "cut taxes for all taxpayers". They planned to cut the 20% income tax rate to 18% and significantly "cut stamp duty to help first-time buyers and growing families".

Outside the political spectrum, former Irish Times writer and Newstalk economist Marc Coleman published a book titled, The Best is Yet to Come. And Bank of Ireland economist Dan McLaughlin slammed negative reporting about the economy. He was adamant that we were in for a "soft landing".

But in an article in the Irish Times as far back as December 2006, Morgan Kelly, the UCD economics professor, was saying the complete opposite.

He wrote, "Offering no evidence except wishful thinking, estate agents and politicians assure us that we have nothing to worry about: the Irish housing market can look forward to a soft landing.

"If we look at what has happened to other small economies where sudden prosperity and easy credit drove house prices to absurd levels, we should be very worried indeed. If the experience of economies similar to ours is anything to go by, we may be looking at large and prolonged falls in real house prices of the order of 40% to 50% and a collapse of house-building activity."

A year later, on New Year's Eve 2007, the Irish Times did a head-to-head feature with two experts debating "Will 2008 be a bad year for the Irish economy?"

Warning that economic booms are followed by busts, then NUI Galway economist Alan Ahearne warned, "Our economy is likely to fall into recession in 2008".

"The battering that our economy is about to take may be more intense and prolonged that almost anyone can conceive," he said.

Meanwhile, in October 2005, David McWilliams said, "The banks are breaching lending guidelines, and in so doing, undermining the stability of the banking system." He later warned in November 2007: "Irish bank losses – in property alone – are likely to be enormous".

In hindsight, Ahearne, Kelly and McWilliams, who were perceived to be overly pessimistic at the time, were accurate. But for every Ahearne or Kelly of the time there was somebody like Danny McCoy of IBEC.

On the other side of that Irish Times debate, McCoy argued, "The rate at which the economy will expand may be lower than in recent years but 2008 may provide the springboard for more sustainable growth in the future."

The following year, the global credit crunch deepened and a global financial meltdown was precipitated with the collapse of Lehman Brothers.

Nobody has laboured the point that Ireland's economic meltdown was precipitated by the collapse of Lehman's more than Cowen. He regularly blames Lehman Brothers for our woes and for the night when his government guaranteed the banks on 28 September 2008.

But in one of the most telling speeches on the banks bailout last week, Gilmore's predecessor as Labour party leader, Pat Rabbitte, pointed to comments made in the Dáil by Cowen the day after the guarantee.

As Labour's Joan Burton argued against the banks' guarantee, Cowen said: "It is my intention to ensure that the Irish taxpayer will not be liable in any way for any deficit that may occur in the event of there being a problem in the future."

If there is egg on Cowen's face over that comment, then Seán FitzPatrick's comments in a radio interview with Marian Finucane on the Saturday after the guarantee seem grotesque.

He told Finucane, "The cause of our problems was global so I can't say sorry with any degree of sincerity and decency."

He claimed that Anglo was "a very well-capitalised bank". "I believe the decision made last Monday is probably the most important decision made, in an economic point of view, since the foundation of the state."

For a very different reason, FitzPatrick's comment proved correct. It was probably the most important economic decision since the foundation of the state – until last Tuesday, which dwarfed everything that preceded it.

At the end of his historic speech on Tuesday, after referring to various examples of the international community respecting his action to date, Lenihan finished with the line: "Others believe in us. We must now begin to believe in ourselves."

There are many others who share the blame, including the CEO's of banks whose greed for even higher salraies and bonuses and competitiveness, fuelled the wreckless lending. Ther eis much talk about those who borrowed as well, but those who weren't speculating have less responsibility and face the highest price.
We must however move past blame, as it is a distraction from what is continuing to happen. We still have many of those responsible and a bulging public service we cannot afford. We must ensure there are severe consequences for those who are responsible, otherwise this will all happen again.
It is said, and I would agree, that there is no leadership and no viable alternative, but this can be remedied very quickly if we as a nation stood together and politley asked those in power to step aside and we insisted on people with integrity and civic mindedness be put in place not spindoctors. These people would come to the front if they could rely on the general population to support them through what will undoubtedely be a tuff numbers of years. The choice is ours, corruption or integrity.

Without a doubt the doubt ultimately lies with the public who repeatedly elected these incompetents to office time and time again. When a policy of Me Feinism is the sole motivating factor in selecting a government then the result will be the mess we see unfolding. That is not to say that these FF gombeens and the former Financial Regulator are without blame, but the role of the public in its indifference to corruption and cute hoorism is central to the disaster.

People were happy to drink at the punchbowl as long as it continued and the aren't we great group left no room for contrary opinions. Funny business however is that many of us in the Irish diaspora or even those from overseas who could compare price levels told people that things had gotten out of whack by any standard ie house price levels, every tom dick and harry in the countryside involved in construction and the pure madness of it all. I am writing this on a visit to Korea and china and can only lament the lack of common purpose and wasted opportunity because of this mess. For some reason even the communist party in china is managing to express fears about inflationary housing and other prices when this seems to have been beyond the ken of our rulers. Now if that isn't an indictment of what has happened....

I don't think it's entirely fair to blame the public for the economic collapse. After all, they didn't have access to all the facts and figures.
They could only form a view from what the government was telling them, and even the opposition was promising the sun, moon and stars at the last election.
No, the fault lies with the politicians, bankers and developers, whose greed and incompetence have destroyed this country.

Ahern and McCreevy used to speak as if we were living in Platos Republic.Cicero wrote to Atticus in 60 BC about the stupidity of such politicans.Quote As to our friend Cato he speaks in the Senate as though he were living in Platos Republic rather than Romulus,s s**t hole.In his opinion idiot policies had reduced Rome to this state. At least Rome survived for a few more centuries.The clowns we have given the responsibility to have done in record time. Fianna Fail have played a blinder producing misfits to govern the country

I say blame Alan Dukes...for sure since the Tallaght Strategy which he didn't get any credit for he wanted to get his own back. Now he has & is...& has bonuses to give out to beat the band. Even before NAMA took off at all he was putting more debt on the bill...it's a funny auld country this is when you're rich enough to laugh...but not so, when you're poor enough to cry & the latter suits most of us. So I say once again, blame "Alan Dukes"!