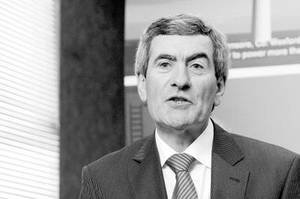 ESB chief executive Padraig McManus was paid more than €750,000 last year, making him the highest-paid boss of a state-owned company.

McManus, who has been chief executive since 2002, was paid bonuses of nearly €210,000. The electricity company said €104,000 of this was due to him for completing his seven-year term as chief executive in 2009. McManus has been reappointed chief executive until 2012. The information is contained in the ESB's annual report which was posted on the company's website on Friday evening, at the start of the bank holiday weekend.

That figure is more than three times the annual salary of Taoiseach Brian Cowen and well above the €500,000 cap on salary for bank executives imposed by the government. Finance minister Brian Lenihan has said he will review the salaries and bonuses of the top executives in semi-state companies.

Several semi-state company bosses earn large salaries and bonuses. Donal Connell, the An Post chief executive, was paid €500,000 in 2009 even though the company lost €25.5m, and Declan Collier, who runs the Dublin Airport Authority, was paid a total of €568,000.

The ESB's annual report says its profits in 2009 more than doubled to €580m. The surge in profits was because of gains made on the sale of some of its power stations to Spanish company Endessa. Its turnover dropped 11% to €3bn as customers fled to Bord Gáis, which is undercutting the ESB's electricity prices.