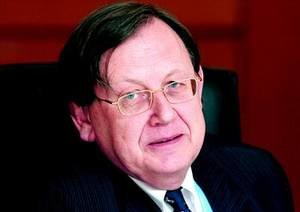 Nout Wellink, chairman of the Basel Committee of Banking Supervision: accounting for 'Basel III' changes would push AIB's capital deficit to €4.5bn and Bank of Ireland's to €2.7bn

THOSE involved in preparing AIB and Bank of Ireland to raise capital have not been helped by a curveball thrown by the Basel Committee on Banking Supervision. The latest changes in bank capital requirements, known as the Basel III proposals, could force banks to deduct staff pension-scheme surpluses or deficits from their capital cushions.

While the changes are currently at consultation stage, the Irish banks, government and the Financial Regulator will be hoping that the Basel III proposals will take some time to be formally adopted. According to analysts at JP Morgan, the US investment bank, accounting for the existing pension scheme and other Basel III changes would push AIB's capital deficit to €4.5bn from its earlier forecast of €2.4bn and Bank of Ireland's from €1.5bn to €2.7bn.

In recent weeks AIB and Bank of Ireland have moved to tackle their growing pension-scheme deficits, though one banking source said the move on pensions at AIB had been in the pipeline for nearly a year and was not prompted by the Basel announcement.

AIB employees are being balloted by the Irish Bank Officials Association (IBOA) to accept proposals by industrial relations fixer Kevin Foley that would see some staff (those who joined the bank after 1998 when it closed off the defined benefit scheme to new members) pay 4% of their salary this year and 5% next year to help plug the gap in the pension fund.

The pension fund deficit stood at €1.26bn at the end of June last year, though the liabilities of the scheme are not known. New figures on the deficit will not be released until the bank publishes its annual report later in the year, a spokesman said.

Bank of Ireland and the IBOA began talks earlier this month about plugging its €1.5bn deficit in its defined benefit pension scheme. A review of the trust deed and rules that govern the bank staff pension fund by the advisers hired by the IBOA found that Bank of Ireland cannot discontinue the defined benefit scheme without the consent of at least 75% of its members, the Sunday Tribune has learned.

While getting agreement with AIB on reducing the deficit looks likely with the ballot going ahead, the situation at Bank of Ireland is more difficult. As part of the talks with the bank on the pension fund, the IBOA has sought assurances from the bank on job security, pay and other issues.

There is also a history of disputes between the two sides on the pension schemes. Industrial action was only narrowly avoided a few years ago after Bank of Ireland closed off its defined benefit pension fund to new members.

Even without Basel III proposals being introduced immediately, concerns about the future funding of the pension schemes will not go away even if both banks get the deficits under control in the near term, as is likely.

Looming on the horizon are potential cost-cutting plans that could see thousands of jobs go as the banks deal with the collapse of the economy and the likelihood of much slower growth in the future.

So far the main banks have held off on implementing redundancies, preferring to axe contract staff and offer career breaks to reduce operating costs. The European Commission's ruling on the banks' restructuring plans is expected to be the trigger for large-scale job cuts at AIB and Bank of Ireland in the coming months.

The IBOA has already warned that up to 10,000 jobs in the banking sector could be lost in the next few years, ultimately meaning far fewer members making contributions to schemes with an increasing number of pensioners. And bank workers will not be expecting their employers to help with contributions because of the need to shore up battered balance sheets against losses.

The markets, though, expect the Basel III proposals to either be watered down before being adopted or their introduction to be pushed out for several years. Given the scale of the deficits in the pension schemes at the moment the banks may well hope that is the case.

Analysts are divided on the amount the banks will have to raise in the coming months from either the government or private investors.

At the upper end of the range Morgan Stanley estimates that AIB will need €5bn in capital and Bank of Ireland €4.1bn, while Davy stockbrokers says the banks need €4.1bn and €2.2bn respectively.

If the banks are forced to deduct the pension-fund deficits, the cost of recapitalising them will be a lot more.

Another reason why the big two Irish banks are overextended, and should not be bailed out any more. They both are going to have to lay people off, and apply pay cuts.

The current regime in the banking sector is ridiculous. In the larger scheme of things, the Irish way of life is again having to make a hard reckoning with reality.