Adams 'rewrites history'
It defies belief that the most powerful republican in the land could not have asked his alleged paedophile brother to quit the Sinn Féin canvass, writes Northern Editor Suzanne Breen 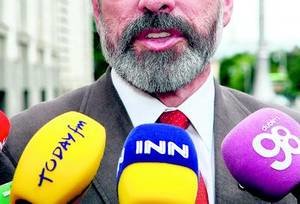 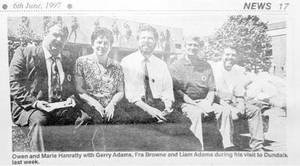 A photograph published in the 'Argus' in June 1997 of Owen and Marie Hanratty, Gerry Adams, election agent Fra Browne, and Liam Adams

Sinn Féin election agent Fra Browne re­m­embers the canvass team set­- ting off through Dundalk in high spirits on a gloriously sunny day. They chatted to locals in Market Square and strolled into the Longwalk shopping centre bantering with customers.

The 6 June 1997 general election was just days away and the canvassers were working hard for candidate Owenie Hanratty.

"Gerry and Liam Adams were with us. The Adams' brothers were not estranged in any way. They got on great together," Browne recalls.

Browne is angry with the Sinn Féin president: "No one on that canvass except Gerry Adams knew that Liam was a suspected paedophile. Unlike Gerry Adams, had we known, we'd have chased Liam. An alleged child abuser has no place on any party's election team. Gerry Adams kept us in the dark."

Browne's account, like those of others on that Sinn Féin canvass, contradicts the version of events given by a Sinn Féin spokesman to the Irish Times. Last weekend, the Sunday Tribune published photographs of Gerry and Liam Adams canvassing at a time when the Sinn Féin president had claimed he was "estranged" from his brother.

Amazingly, the pair were canvassing together 10 years after Liam's daughter, Áine Tyrell, had told the Sinn Féin president that her father repeatedly raped her from the age of four. Gerry Adams had said he believed Áine.

After our photographs were published, a Sinn Féin spokesman told Monday's Irish Times that Gerry Adams couldn't have prevented his brother joining the canvass: "What was he to do: stand up and say on a loudspeaker 'there are allegations of abuse against my brother'?"

The spokesman denied that the photographs blew holes in Gerry Adams' claims to have speedily moved to have his brother "dumped" from the party in Dundalk.

Adams' argument is incredible. It's inconceivable that the most powerful republican in Ireland – politically and militarily – couldn't have told his brother to leave the canvass. It beggars belief that the Sinn Féin president, who has conducted top-level negotiations with presidents and prime ministers, couldn't have successfully had a quiet word in Liam's ear in Dundalk on that sunny afternoon.

If that hadn't worked, then yes, Gerry Adams could have grabbed a loudspeaker; it would have been better than allowing an alleged paedophile to canvass.

But far from being an uninvited guest, as the Sinn Féin spokesman claimed, Fra Browne says Liam was welcomed by Gerry.

"There was no animosity or tension between them. Gerry wasn't in any way uncomfortable in Liam's company. Liam didn't gatecrash the canvass. Pretending he did is rewriting history. Liam was very much part of the Sinn Féin team. He didn't appear out of thin air and just tag onto us that day. He was active in Sinn Féin in Dundalk for years. He was a hard-working activist. He was always talking about his brother, saying, 'I'll see Gerry about that'."

There were 20 people on the canvass. The selected few posed for a photograph for the local newspaper, the Argus.

"The candidate, Owenie Hanratty, his wife Marie, myself as the election agent, and Gerry and Liam Adams were chosen. Gerry was happy with that. It's not like Liam forced his way into the picture and Gerry could do nothing about it," Fra Browne says.

He is disgusted that the Sinn Féin president's inaction meant local republicans ended up canvassing and being photographed with an alleged child rapist.

In a statement to the Sunday Tribune, Owenie Hanratty said: "Neither my wife Marie nor myself had any idea Liam Adams was a suspected paedophile. Had we known we would most certainly not have allowed ourselves to be photographed with him under any circumstances.

"As the Sinn Féin Dáil candidate, I would not have allowed Liam Adams on the canvass had I known he was a suspected paedophile. No republicans in Co Louth knew Liam Adams faced child abuse allegations. We weren't told."

Hanratty said Liam Adams had "worked hard and was very active in Sinn Féin" in Dundalk.

Veteran republican Hanratty had secured the nomination over Liam Adams at a selection convention in Dundalk's Imperial Hotel. Liam Adams publicly withdrew from the race at the start of the meeting when it became clear, from the configuration of the crowd, that Hanratty would defeat him.

Sinn Féin's claim to the Irish Times on 28 December that there was nothing contradictory about our photographs and Gerry Adams' publicly-stated position on his brother is nonsensical.

On 21 December, Gerry Adams had told RTE: "When I heard Liam was in Sinn Féin, and when I heard somebody was putting it about that perhaps he would be a candidate, I moved immediately both to stop that and get him dumped out of Sinn Féin... I moved very, very quickly. He wasn't a contender. There was no nomination by Liam Adams in the Dundalk area. There was no convention in which his name was put forward."

Yet on 5 October 1996 – eight months before the canvass – the Dundalk Democrat reported that a selection convention would be held later that month in the Imperial Hotel. It named Owenie Hanratty and Liam Adams as those seeking the nomination.

Contrary to Sinn Féin claims, the convention took place. The Sunday Tribune has statements from republicans present. But not only was Gerry Adams canvassing with Liam eight months after his brother's name was first publicly mentioned in connection with the nomination, Liam Adams remained a prominent Sinn Féin member afterwards.

"Proceedings were chaired by Liam Adams of Sinn Féin in Co Louth. The main address was given by Sinn Féin's national chairman, Mitchel McLaughlin," the Dundalk Democrat states. The commemoration had taken place six days earlier.

"Liam was expelled after the election and as soon as Gerry realised he was in the party he took measures to remove him," the spokesman said.

Liam Adams wasn't speedily expelled. He was still well-respected and active in the party 13 months after his name was publicly associated with the general election nomination and Gerry Adams' alleged moves to expel him. Contrary to Sinn Féin's portrayal of Liam Adams' role in the party as short-lived and minor, Dundalk republicans insist he was a leading member for at least seven years.

He played a prominent role in the official opening of the new Sinn Féin offices in Williamson Place by Martin McGuinness in June 1996 when he was chair of Louth Comharirle Ceantair. There is no suggestion McGuinness knew he was a suspected paedophile. The Sunday Tribune has uncovered photographs of the event. At the opening, Liam Adams posed for pictures with veteran republican Joe Cahill against a picture of the GPO in Dublin.

Local sources say Liam Adams left Dundalk late in August 1998, still a Sinn Féin member. In the run-up to the May 1998 Good Friday agreement referendum, he was present at a BBC Radio Ulster Talkback debate in the Imperial Hotel, chaired by David Dunseith.

Many Sinn Féin representatives and members are strongly committed to transparency over child abuse. Their president's actions don't in any way reflect on them.

In last week's Sunday Tribune, we asked Gerry Adams a series of questions. He hasn't answered, so we will repeat them here.

Why did you attend the wedding of your brother Liam and stand smiling for photographs when you believed him to be a paedophile? Why was Liam allowed to be in Sinn Féin for at least seven years? Why, in your 1996 autobiography Before the Dawn, did you make 11 references to "our Liam", with no negative insinuation, almost a decade after you believed he had raped his daughter Áine?

Liam Adams worked for several youth projects in Dundalk and west Belfast. You claim that, whenever you became aware he held such positions, you informed those projects. Where is your written record of this? Why haven't you disclosed the names of those you spoke to in the projects?

When you saw Liam so successfully seeking and securing jobs working with young people, why didn't you make your concerns public? You could have done this in general terms without compromising Áine's identity. Why did you stay publicly silent when children in your own west Belfast constituency were potentially at risk?

In April 2006, Liam Adams was photographed smiling with Sinn Féin Assembly member Fra McCann and former party chairman Tom Hartley on the Falls Road. He was surrounded by children from the Beechmount Community Project where he worked. There is no suggestion that McCann or Hartley knew Liam Adams was a suspected paedophile. The previous year, Liam was photographed with children at Belfast's St Patrick's Day parade.

In November, Mary Lou McDonald, who has strenuously defended her leader, accused "the most powerful men in the Catholic church in the Dublin diocese" of "a gross betrayal" of children. Unfortunately for her party, the same complaint can now be levelled against the most powerful man in Sinn Féin.

the leadership should just come out and say they have been controlled by british intelligence since the mid 80s,it is as clear as day .

The importance of this journalist's work cannot be overstated. If we are to deal honestly with abuse in Ireland we must be willing to deal with it wherever it is found. It took a long long time until Ireland got the courage to confront the Catholic Church and surely it won't take as long for us to confront secular society on a similar issue, or will it?

Nonsense, Daly. Gerry Adams was not the abuser, his brother was. Adams and Sinn Fein, are not responsible for policing the behaviour of his brother the way the Church was for for putting and keeping abusive priests in contact with children in their care.

Gan Ainm,
not nonsense at all. Gerry Adams is an MP as well as the leader of the largest nationalist party in the north and as such there is a duty on him which combined with his duty as an uncle and as a human being means that he let his niece down badly, he let his electorate down badly and he let humanity down badly. he is exactly like the church in that there is no way he was not aware of his brother's role both in Sinn Fein and in his youth work. Sinn Féin is not responsible unless Gerry told them about the allegations against Liam in which case they would be.No one is accusing Sinn Fein anyhow except of being economical with the truth about the role of Liam Adams. Gerry is not the abuser but he has added to his niece's pain causing her to say,'I ended up saying look do you know what it is, you have failed me again, when twenty years later I’ve asked you to do one thing.”

As Sinn Fein trys to increase its political support in the Republic- this story will cause huge damage to their Party.
If Gerry Adams know his Brother Liam was raping his Niece from the age of four- well the fact Gerry did nothing speaks volumes as it seems protecting his political dynasty was more important than protecting a child from sexual abuse. As for Liam Adams the sooner he faces the Courts the better- as the truth needs to be told...

Those wishing to do political damage to G Adams should stop using a child abuse victim as ammunition. It is a sad story, which the courts will deal with in due process. Why dont G Adam's critics not choose substantive policy differences to make their point?