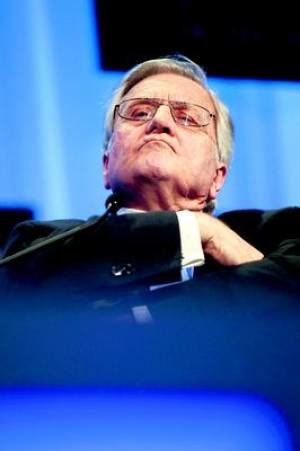 Trichet: hinted at the end of bond purchases

Irish sovereign bonds worth about €8bn have been discretely bought by the European Central Bank (ECB) in the last seven weeks to bolster the country's standing in the eurozone, senior sources in the sovereign bond markets have said.

They account for up to 10% of outstanding Irish bonds and are larger than many experts had believed. The government bond purchases are in addition to a number of supports, including the central bank's liquidity-pumping for Irish banks, that the ECB currently provides Ireland. The ECB, which has spent €59bn since it launched the programme buying government debt in early May, does not identify the eurozone countries benefiting from the purchases. The bond-buying programme is designed to put a ceiling on the rise in sovereign interest rates and thereby save troubled eurozone countries from being forced to tap the new €750bn emergency fund. "We estimate that about 70% of the bonds purchased by the ECB so far have been of Greek bonds," said Ciaran O'Hagan, head of Paris rates strategy at Societe Generale. Separately, O'Hagan predicted that the National Treasury Management Agency would have no difficulty selling new debt at its next scheduled auction on 20 July.

But senior sources for the first time said that the ECB had not bought Spanish or Italian bonds despite widespread perception that eurozone central banks had been buying Spanish bonds on the so-called secondary debt markets where existing holders trade their debt paper.

Other sources in London estimated that the ECB has spent about €8bn and €10bn, respectively, buying Irish and Portuguese bonds on the markets.

ECB president Jean Claude Trichet last week hinted the buying may be drawing to a close. The central banks have bought smaller amounts of Greek, Irish and Portuguese debt recently, sources say. The purchases have been controversial because some experts believe that the markets have reacted by selling and not holding onto Portuguese and Irish debt. Spain's success in borrowing €6bn at an interest rate of under 5% helped steady jittery markets last week. Irish and Portuguese debt continued to trade at over 5%, the highest rates for eurozone countries still accessing the debt markets.