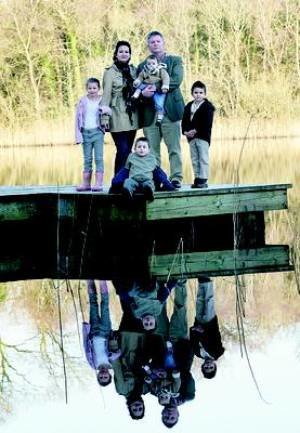 Gerry McGeough with his family: 'secret deal between the British and Sinn Féin'

The British government has operated a secret scheme granting royal pardons or immunity from prosecution to hand-picked ex-IRA members wanted for killings, bombings and other paramilitary activities, it has been claimed.

Of 216 'on the runs', 47 have been told they are free to return to the North with no fear of prosecution, according to leading Tyrone republican Gerry McGeough.

"There was a secret deal between the British and Sinn Féin. A meeting was held in a Dundalk hotel. I'm disgusted that hand-picked 'on the runs' have received preferential treatment – and can come home and lead normal lives with their families – while others can't or if they do return are living in fear, always looking over their shoulders."

The Sunday Tribune has seen the names of some of those allegedly given immunity. They include prominent ex-IRA members. A Northern Ireland Office (NIO) spokesman denied the claim. "There is no secret deal to pardon on the runs," he said.

McGeough was arrested at the 2007 Assembly election count. He had stood as an anti-PSNI republican candidate. His lawyers will tomorrow put forward an abuse of process application: "They will argue that my prosecution breaches article six of the European Convention which guarantees a fair trial, and article 14 which guarantees the right not to be discriminated against.

"I've been singled out for prosecution because I am a republican opposed to the political status quo." McGeough said his former Sinn Féin colleagues had offered no support.

"I've been imprisoned in Germany and the US for my republican activities yet Sinn Féin leaders meeting for their ard fheis this weekend are unsupportive because I'm not 'on message'."

Tyrone man Vincent McAnespie was also charged with the attempted murder of Brush and weapons' possession. The first, but not second charge, has since been withdrawn against McAnespie who is pleading not guilty.

In a document obtained under the Freedom of Information Act by Kevin Winters' solicitors, the NIO says Sinn Féin provided the names of 216 on the runs. The PSNI and the Public Prosecution Service then reviewed files "to determine whether the individual is wanted for questioning, arrest or prosecution".

The NIO said decisions were evidence-based and whether prosecution was in "the public interest".

It claimed "political considerations play no part in this assessment".

McGeough's lawyers are demanding the authorities disclose "all material pertaining to any discussion, meetings and correspondence" relating to decisions not to prosecute certain republicans.

The former head of the PSNI's serious crime squad, Norman Baxter, told a House of Commons' committee last November: "There was an extremely unhealthy interest by (NIO) officials about prioritising individuals who were on the run and ensuring they were cleared to return to the North."

Gerry McGeough is being treated in a shameful manner by the state and their former Republican allies. His case highlights the hypocritical double standards of 'agreed' British rule in Ireland. As it is highly unlikely that Gerry and Vincey will receive justice in a British court I can only wish them good luck.

How can Gerry McGeough receive a fair trial in a "diplock" court? And why are only ex-IRA men "who are loyal to Sinn Fein", the only ones being given "immunity/pardons"?

"British Seek To Block Inquiries”, June 14, 2007 in the Irish Voice. Senior civil servant Maurice Hayes claimed “millions of pounds used to fund a public inquiry into the British Army’s shooting dead of 14 civilians on Bloody Sunday could have been better spent in other ways and that a lot of people in Northern Ireland are particularly concerned the police would have enough resources to deal with the present crime challenges facing the police service here.” He goes on to say “there comes a point when political archaeology doesn’t make terribly much sense and he thinks there is a lot to be said for Northern Ireland drawing a line”.

We should ask Maurice Hayes to explain where he thinks that “drawn line” should begin and end? Will that line also pertain to Irish Republicans like Gerry McGeough, arrested on charges dating back as far as 29 years ago? What sense and abuse of funds does it make in pursing a case against Gerry McGeough especially when the RUC/PSNI have failed to produce any concrete evidence pertaining to these charges over the past 25 years?

Maurice Hayes’ statement only goes to prove that when it comes to Irish justice there remains a double standard. One standard for the British government and RUC/PSNI and one for Irish Republicans.

Why don’t they practice what they preach? Gerry's case is costing over 1 million pounds to prosecute?

What's going on in Ireland that the peoples' supposed representatives are failing to defend them against the crimes of Britain's armed forces?

The double-standards being operated by the British is only to be expected when it comes to dealing with republicans such as Gerry McGeough. The so-called leadership of Stormont SF should be ensuring that all political prisoners such as Gerry are granted an amnesty, not just the ones fitting Stormont SF's agenda, and certainly not a 'royal' pardon from Lizzy Windsor. It's a total disgrace what is being done to ex-prisoners by other ex-prisoners now wearing Armani suits and trimmed beards.

The fact that Provisional Sinn Fein would turn their backs on an ex comrade shows just how far they have come in their anglicization process. 15 years ago Gerry and Martin were preaching not one bullet will be handed over. Today they are begging the nationalist community to squeal on each other to their British bosses. You can say what you want Gerry, you can even say it in Irish, but you can't fool all of the people all of the time. We know what you are.

I'd like to wish Gerry & Vince all the best & good luck.

This type of press makes it harder for traditional Republican supporters overseas to keep the faith with the current Sinn Fein leadership, when they look more like a British government quango, I just wonder how the people of Ireland think of them now to the party they voted for in the past. The abandonment of former comrades to the lions because they happen to disagree with your current policies and at the whim of the British Gov. is shameful. It appears to me and others like myself in Glasgow and beyond that Republicanism has, like many other party policies, been diluted from the Sinn Fein objectives for a united Ireland. Allegations of a 'deal' with Thatchers Gov. to end the Hunger strikes and now another example of a comrade left to burn, make it hard to defend the conduct of our Republican leadership . I even heard Gerry adams liken himself to a "General" in a recent channel 4 documentary, from the time of being a bhoy Gerry has always been at pains to distance himself from being attributed with military titles etc, so why the sudden change? Does Gerry think he can spin himself a new chapter in the annals of Irish republicanism? All kidding aside it is repugnant to see men I identified since I was young in the same category as James Connolly or Bobby Sands, become synonymous with unionists, tell me if Im wrong but does anyone else who is outside the country looking in feel the same?

This is the Brits continuing at dirty tricks, they give 20% and take 80% whats new.
They all fought for freedom, so they should all be pardoned.

People have been saying that all volunteer's should be pardoned. I disagree. What have they done to have to be pardoned? these men fought for freedom and have done nothing wrong. I hope some people will continue to fight for freedom.
DOWN WITH STORMONT.
''Ireland Unfree Will Never Be At Peace''

If the war is over, then it is over.

These rules are there because they work for both sides in conflict. Why selectively apply them? Possibly to deny the case that this was a war? Bush and Obama try to avoid the Geneva Convention also.