Medicinal cannabis use may be legalised
Ali Bracken, Crime Correspondent 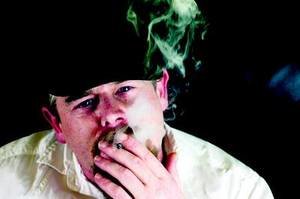 Gordon McArdle used cannabis medicinally in the US; now he wants it legalised here

THE government is open to making cannabis legal for medicinal purposes following an evaluation of all the international research, minister for community, equality and Gaeltacht affairs Pat Carey has said.

Three weeks ago, Carey, who has special responsibility for the National Drug Strategy, met with a constituent and medicinal cannabis activist, Gordon McArdle, who submitted 'The Compassionate Use of Medical Cannabis Act 2010'.

McArdle was a medicinal cannabis patient when he lived in the US as he suffers from post-traumatic stress disorder, and previously owned a medical cannabis dispensary in California.

Carey said the government is seeking legal advice on the effectiveness of the drug for the treatment of conditions such as multiple sclerosis and certain forms of cancer.

"This is something that is on the government agenda to address, down the line," Carey told the Sunday Tribune. "I was quite happy to meet with Mr McArdle. He is a constituent of mine, and we had a productive meeting. We are aware of international medical research on this issue. It is something the Minister for Health Mary Harney is seeking medical advice on and is something that will be addressed."

McArdle (36) said his meeting with Carey had been constructive.

"I expected resistance so I was pleasantly surprised. I have developed a framework. I am suggesting that if a GP recommends cannabis for a patient with a particular medical complaint, the state then issues this person with an ID card. The person then brings their ID card to a state-monitored medical cannabis dispensary. Before the prescription is filled, the person working in the medical dispensary must confirm the identity card is genuine with the state as well as with the person's GP," he said.

"This is about providing cannabis for patients who need it. It has proven effective as a treatment. If the dispensaries are run properly, there should not be any problems. I was suggesting that these dispensaries should be run like pharmacies. If we are going it do this, we should do it right."

McArdle said the legalisation of medicinal cannabis would bring Ireland into line with Britain, Canada, Italy, Spain, Israel and 14 US states. He said he was not advocating the legalisation of cannabis in general. He added there should be an EU-wide approach to the issue, and a common strategy.

"There is an EU directive that allows medical cannabis in compassionate cases. This could be adopted by the government here," he said. "The fact that the government is willing to address this is very positive. If cannabis for medicinal purposes was introduced, it would provide jobs and revenue for government."

Medicinal cannabis is certainly not "legal" in Britain.

At least we didn't think so until very recently.

Only today, Irish cannabis exile, Noel McCullagh, has helped to clarify that patients prescribed medicinal cannabis in a country where a regulated system exists are protected by European law to allow them to bring it back to the UK. Ireland is now the only European country where such protection does not apply.

Great article. The only pity is that it has taken so long for this important medical research to be acknowledged. Congratulations to Mr McArdle on bringing this important matter to national attention.
Considering the potential revenue available from medicinal cannabis I hope that this legislation is soon passed and immediately implemented.
And if commonsense can be used perhaps full legalisation will soon follow.

Great piece, it's nice to see some modern thinking for once in this country.

The fact that our cannabis law states it has no medicinal value is quite simply a lie. It denies thousands of years of safe use both medically and recreational, and it goes against what numerous studies and reports worldwide have shown regarding the many medical benefits of cannabis.

While recreational use is a separate issue from this article, I would like to say that prohibition is a failure. Why let gangs control its distribution when it could be taxed and regulated and dealt with as best as possible.

where do you keep getting this information about legel medicinal cannabis in britain?

it is not legal and people are being locked up for using it as a medicine - Sativex has been made available but NICE (how ironic - certainly not Mr Nice) have deemed it too expensive.