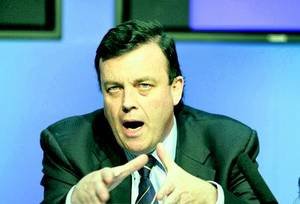 Finance minister Brian Lenihan: leaning towards extending the original bank guarantee to the end of the year for debt and deposits not covered by the extended liabilities guarantee (ELG)

Société Générale, a market-maker for Irish sovereign bonds on behalf of the National Treasury Management Agency, has suggested Irish banks could default on a limited amount of "state-owned" debt after the government blanket guarantee expires on 29 September.

In a research note last Friday, Ciarán O'Hagan, head of rates research at the bank in Paris, said default on "some" banking debt could "make sense".

O'Hagan said that under no circumstance was he advocating a bank such as Anglo Irish to default on any bank bond debt issued under the government's Eligible Liabilities Guarantee (ELG), which the EU has allowed to be extended to the end of the year.

could benefit the sovereign if properly managed," said Société Générale, adding "a massive transfer of costs and risks" had been moved from "defunct banks to the taxpayer". Reversing that process could now benefit taxpayers, it said.

It is understood finance minister Brian Lenihan is leaning towards extending the original bank guarantee to the end of the year for debt and deposits not covered by the ELG.

This would keep vulnerable short-term corporate deposits and senior unsecured debt under state protection – and buy the government time to bring its two guarantee policies into alignment from January.

Such a move would be a broader extension than the market expects and would be good for Irish fixed income markets, one Dublin-based debt analyst said. It would also be consistent with comments Lenihan made to the Dáil in March.

AIB managing director Colm Doherty and Anglo Irish Bank chief executive Mike Aynsley have both urged the government to extend the full guarantee to protect the banking industry in Ireland from a volatile funding environment.

Last week Anglo chief financial officer Maarten van Eden reiterated the bank's desire for the guarantee to be extended. "I don't think the Irish banking system is ready to do without it, but it looks like we'll have to do without it because I don't think our lords and masters in Brussels are happy for Ireland to do it again."

International debate about the "wall of money" Irish banks need to refinance before the guarantee runs out sparked comment last week in the Financial Times and the Wall Street Journal.

But Merrill Lynch said last week that the Irish banks will be able to redeem an estimated €22bn in bonds this month.

Merrill also sees the cost to the taxpayer from Anglo being capped at €25bn, far below the €35bn estimated by rating agency Standard & Poor's when it downgraded Ireland last month.

"It was unwilling to disclose the calculations, which is unfortunate as we are not able to verify the reasoning," said Merrill.

"We think this number is likely to prove wrong."

Of course the guarantee should NOT be extended.
It should never have been given in the first place.
If there was any justice in this country, people, lots of people, politicians, bankers and builders, should be in jail, real jail, for long, long sentences, for the dirty self-interests and lack of political and moral ethics that drove that disasterous political decision, in the first place.
The personal properties, including family homes and stock portfolios of family, friends and lovers of anyone with a direct or indirect interest in such decisions should be sequestered to pay back some of the incredible amouints gifted from our childrens futures.
It is long past time to see heads roll. Politicians will not act against themselves.
We clearly need a totally new fleet of virgin politicians, with no links to these corrupt cowboys who sold us down the river for private personal gain.
What does it take to get people off their fat posteriors to tackle these cowboys where it counts, in Ireland ?
Aghast !

Death of a Tiger

Anglo came, and Anglo went
Left the Irish, without a cent
Greedy politicians, some of them bent
A broken people, can’t pay the rent
Golden Circle, over lent
To the streets, anger vent
Art Minister, to Venice sent
Pension plan, without dent
Limo ride, to Galway event
Hugs and hand shake, with suited gent
Envelopes flowing, in big tent
Cambridge is where, some money went
Drumcondra mafia and Biffonian scent.