News | Markets | Interviews | Media and Marketing | International | Technology | Personal Finance | Recruitment | Motoring
Back To Business, Simon Kelly - 'Thank you, Anglo, for being there for business'
Without a progressive bank such as Anglo, thousands of jobs would not have been created 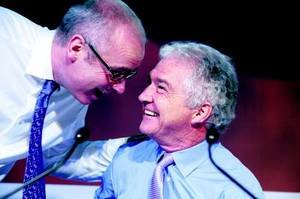 Former Anglo chief executive David Drumm and chairman Seán FitzPatrick: Anglo was a 'positive and dynamic force' in banking when it was done sustainably

I have to start this week by coming right out and thanking Anglo for being there in the early days of the Celtic Tiger, when no other bank would support business in Ireland. As we now line the bank and its previous management up for the firing squad, let's remember its full life and not just the last few years. Let's take the good and bad in equal measure.

Populist politics determines that Anglo is now to blame for everything, but let's get real here. If the problem was as simple as that, we would not be where we are in this zombie economy.

I borrowed a lot of money from Anglo over the years for IDA- and government-supported office projects. Without these buildings, many multinational jobs would not be here in Ireland. Every one of these projects was a risk at the time, and without a progressive business bank such as Anglo, many thousands of jobs would never have made it to Ireland from companies such as Compaq, HP, UPS, Microsoft and many more.

To build an economy you need infrastructure, and this includes speculative office buildings, factories and hotels. When the US multinationals came looking at Ireland in the mid-1990s, they liked what they saw in the people and the tax system, but they also needed offices. They were not willing to wait around for one to be built so it had to be available at short notice – on spec, as we would say in the business. We were generally competing with Scotland or Wales for these jobs and speed was very important to the success of winning these investments. Anglo was vital in building this infrastructure that Ireland needed to grow, supporting employment and the economy.

There was no point in approaching the establishment banks for this kind of lending. They were not trying to grow the economy and support business. Anglo was a powerful and dynamic force and it was vital to the early years of the Celtic Tiger when business was done sustainably.

I will miss Anglo for this and it will be missed in the future by the whole economy. We can see from the establishment banks that small businesses, farmers and people looking to make a start in life will get short shrift in the reception area of an AIB or Bank of Ireland branch. There will be lots of exciting poster and TV campaigns about lending and starting your own business, but they do not have the culture of business lending. Their new business model will be to increase loan margins on all existing customers so they have no need to lend new money to business. Can finance minister Brian Lenihan make them lend it? I doubt it. I have a creditworthy business ready with an application so I will report back on this just as soon as the application is refused.

It's a national phenomenon caused by the actions of hundreds of thousands of people, each in their own way causing a boom, and now a bust.

I am a borrower of money from Anglo and I will be a Nama client, or as they like to call me, a debtor. I won't be in there trying to blame Ahern or Cowen or Lenihan or David Drumm or Seán FitzPatrick. I will stand up and blame myself. I chose to go into the casino and I played at the table signing the personal guarantees. There are thousands like me and there are many more thousands who made a decent living working in and around the property business.

Benchmarking and other public service pay bonanzas were paid for by the property boom, so let's not pretend that the money was not spread around to the whole economy. Social welfare payments were raised on the back of Anglo lending. The Irish Times and other newspapers never had a problem accepting adverts selling overpriced apartments, and to this day, they still accept money to advertise insolvent banks such as Anglo. Profiteering from the death of the property market is great business for accountants and lawyers, who gorge on fees in insolvencies and liquidations. Everybody had skin in the game so stop looking for scapegoats as a way to hide personal guilt.

So I say to Charlie Bird and the like: get off David's lawn and get out of Seán's front drive. They have lost everything but they still have to live. The bank failed because we all failed.

So back to the start, Anglo was good and bad because the people of Ireland are good and bad. Our national successes and failures are a reflection on ourselves. If you want to know what caused the crash and the failure of Anglo, have a look in the mirror. We all built the boom and we all caused the bust.

Simon Kelly is a former property developer. This opinions expressed in his weekly column for the Sunday Tribune are his own

I hope your new "creditworthy" business is a time machine so we can all go back and fix this mess before it started.

Unfortunately that's as likely to happen as anyone in Ireland, yourself excluded, ever thanking Sean Fitzpatrick for what he has done.

You're away in dreamland boy....

"If you want to know what caused the crash and the failure of Anglo, have a look in the mirror"

Ah, the good old Fianna Fail/vested interest mantra - "everyone is to blame, therefore no one is to blame". It's wearing a bit thin.

"It's a national phenomenon caused by the actions of hundreds of thousands of people, each in their own way causing a boom, and now a bust".
You're surely thinking about the young couples, persuaded/forced to/vindicated if not buying imediately and told that they would never be able to if too late..
Well you're on the side of the "elite" and your speeches always sound and are biaised, you're part of the binge-living culture and you're unable to see anything wrong, as usual, with your unsustainable behaviour. Anywhere else in a modern economy with real institutions and medias the bankers/regulators would have been questioned from an early stage and some convicted of criminal actions but hey, "dat's the globol economy dat cause da mess".. Pathetic, at least have the decency to shut up.

Simon. Are you insane?

I have always lived within my means and on minimum debt. I've never borrowed beyond ability to repay nor have I used any borrowings to pretend that I am something I am not or buy things I cannot afford.
I am NOT a cause of this country's predicament. Nor are the people I know who run their personal finances in a similar fashion. No deluded polemicist posing as a columnist can ever convincingly prove otherwise.

Simon Kelly is talking nonsense for the most part. He says
"get off David's lawn and get out of Seán's front drive" and "The bank failed because we all failed"
Eh no investigative reporters should doorstep these charlatans. The bank failed because of the actions of those working for the bank and because of its clients - period. What we need in this country is for people to take personal responsibility and be held accountable.

You can't really get a better perspective into the mind of a Celtic Tiger property developer than this article. When these guys were building more properties than the countries requires (300,000 empties, remember), they weren't doing it to make money. No no; they were doing it to help us, the little people. It was pure charity, you see. And so now that their charitable venture has failed, it is only right that we, the little people, should bail them out. It's our duty as taxpayers to pay - as Fintan O'T has worked out - an average of €4,600 p.a. for Simon, Seanie, David and their pals.

I mean as Simon says, David Drumm has "lost everything". You know, apart from the 6-bedroom million euro house in Malahide. And the large house in Massachusetts. And the €700K he received for the 15 months up to the end of last year. And probably the 700K bonus he'll get paid. I'm in floods of tears thinking about this tragic man.

Is this guy for real?

He may have chosen to go into the casino & play at the table signing the personal guarantee, but the guarantee was just an IOU note. The operators of the Casino ran it in a totally reckless manner & effectively allowed punters like him to purchase chips without bringing any of his own cash to the counter.

Mr Kelly’s use of the term Casino is interesting nonetheless. From 1998 to 2007, it has been reported that Anglo Irish's balance sheet grew by an annual average of 36%, well above the 20% mark that regulators customarily regard as unwise. This was driven by lending policies that were almost entirely based on taking property as security. This involved an endless revaluation of a single asset class so as to continually allow borrowers gear up on property already held as security. Borrowers were in effect being funded 100% of cost i.e. they were investing no real cash as such.

This is why Anglo’s losses now far exceed the other banks. Anglo was effectively a one trick pony (property). Anglo lent no money to businesses creating value or real sustainable employment. It primarily lent money in ever increasing sums to a small circle of developers as they amassed land banks & trophy properties.

So not only did Anglo focus on one asset class, it deliberately maintained a narrow circle of customers. Only a select few were admitted to the Casino.

Clearly Anglo was run by senior management team without regard to any basic risk principles who, appear to have been more focused on writing themselves cheques to invest in oil wells & ironically other casinos. In addition they were clearly busy devising schemes to protect the share price which, in large quantities they regularly handed themselves. How legal any of this was I am not sure, but the Regulator & other senior civil servants armed with no shortage of facts & warning signs stood by & did nothing! That is an outrage & a huge neglect of duty to the taxpayer that employs them.

The actions of the casino operators (Seanie, Drumm etc) have left all those outside the circle to pick up the tab. To display any sense of justice take their houses (front lawns & drives), their pensions so as to help the taxpayer stomach the financial pain that will have to be endured for generations to come.

I'd say you are all public sector workers on this forum. The simple fact is the property boom paid for benchmarking and now its gone and now a new benchmark needs to be set. Half the problem is the banking sector the other half is the public sector and their ridiculous demands from the people who pay their wages. Anglo did pay for the public sector.