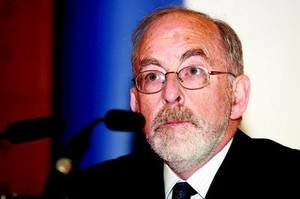 The run on the Irish banks in recent weeks has been of a scale that has set new records for national financial systems in western Europe. In September, a chunk of senior and subordinated debt was repaid to private lenders. Starting in early summer, big companies in Ireland and Britain had withdrawn their cash from the guaranteed Irish banks – because by then it was clear the state guarantee, put in place two years earlier to insure the huge liabilities of the banks with weakening government finances, had already snapped. Ordinary customers too have withdrawn cash in recent weeks. When you hear taxi drivers discussing the finer points of opening Swiss bank accounts, you know that the good old-fashioned run on the banks continues to run its course.

Official figures confirm the scale of the flight of cash. As deposits flow out the front door, the European Central Bank and, significantly, the Irish Central Bank through its own so-called "exceptional liquidity assistance" have pumped tens of billions of euro in at the other end on a weekly basis to keep the banks from closing. By late last month, from a small base, the Irish Central Bank's 'exceptional' facility to the banks had grown to a truly astonishing €44.6bn.

But the question of who will end up repaying the exceptional loans should concern us. Could it possibly be that some of them end up being dumped on taxpayers? Expert Lorcan Roche Kelly has done most to untangle the financial statements of the Irish Central Bank and ECB. From his base in Sixmilebridge, Co Clare, the trained engineer and occasional share trader unpicked the mystery of how an insolvent bank like Anglo Irish was keeping its doors open. What he learned has helped him focus his sleuthing skills on the Irish Central Bank's ongoing funding of the banks.

"The story starts in March. What happened was that Anglo reported its 2009 annual report, and I couldn't understand how it was funding itself. From my knowledge of the markets, I knew that players were reluctant to fund banks, especially to provide subordinated debt to state guaranteed banks. I came across something called a Master Loan Repurchase Agreement [MLRA], which surprised me because Anglo was not using ECB funding."

Roche Kelly called a friend who used to work at the Irish Central Bank, who told him that the MLRAs had not been used since the days of the punt and even then only in exceptional occasions when a bank was in danger of running out of money. "I emailed the Central Bank which very helpfully emailed back and said it can provide Exceptional Liquidity Assistance (ELA). The Central Bank as lender of last resort can satisfy itself to accept certain assets."

By the summer, the latest interim report from Anglo showed that the master loans had metamorphosed into something called a Special Master Repurchase Agreement. This again raised a key question – why was Anglo not tapping cash from the ECB by pledging or repo-ing its assets for cash? It was instead turning to the Irish Central Bank. "If Anglo could not repo assets with the ECB and the Irish Central Bank was providing 'exceptional' lending, I thought there must be something smelly with the assets Anglo was offering in the first place," Roche Kelly concluded.

The next significant date was last September. The banks had managed to bunch a huge €55bn in repayments to senior and subordinated bond holders into a few weeks ahead of the ending of the original state guarantee.

"The Irish Central Bank's financial statement showed a jump of €55bn at the end of September. That was the next big piece of the jigsaw," Roche Kelly said. "The significance of the €55bn was that the banks had bonds in the market and the market was not prepared to refinance those bonds. So, all the €55bn due for repayment in September was repo-ed at the ECB and the Central Bank. After that, it became a matter of watching the 'other assets' column in the monthly Irish Central Bank statement where the exceptional liquidity assistance appears."

In his blog, corner­turned.com, Roche Kelly has documented the escalation of the funding for Anglo and other unnamed banks this autumn, as the run on the banks continued apace.

Sleuthing through the figures, Roche Kelly spelled out the significance of the funding: "Of the €44.6bn, some €31bn is in promissory notes and €2bn is in other assets. That leaves €11.5bn in bank assets with the Irish Central Bank we don't know much about. But we know it is not of good enough value to be repo-ed at the ECB, which is the place to go for banks to get cash."

Roche Kelly's next goal is to unpick another puzzle: at what point do the ECB, the EU and IMF decide it would be better to close banks here rather than have our state finances pushed even deeper into a private banking mess?

The Irish Central Bank is sticking to its party line: "Similar to other central banks, the Central Bank of Ireland can supply exceptional liquidity assistance to institutions when that is judged necessary. This facility is not part of regular monetary policy operations. The bank does not, however, comment on these operations. The Central Bank does, however, publish details of its liquidity operations. Any loans by the bank are contained within our balance sheet which is updated on a monthly basis as part of our monthly statistics."

Still no bankers, builders or politicians in jail.
We need a different police and judicial system.
Why no outrage ?
One law for the poor....etc.

The current cabinet, government & opposition parties who knew what went on in the banking system should be in jail, instead of allowing them to round up the taxpayer forcing us to rescue the banks, the above lot should be rounded up & locked up pending investigation, they will soon be singing like canaries. All the responsibility rests with the government. Whatever about equality, & our government does not adhere to this EU policy, its jobs for the boys brigade, this man Honohan is way too old & out of his depth to oversee banking in this climate. Shake up government shake up banking now.

Why no outrage?
Well,would anyone like to answer Jack?
Lets wait for the floods of responses Jack to your ligitimate question.
Personally I think its because the Irish are the most sheepishly cowardly race of people,severely lacking cop-on,self-respect and honour,and I dont think I will ever understand how they ever previously managed a revolution!

Phil, its like I said earlier, this FF,lot & FG merchants s... on the people, they did this since independence. The revolution took place via a different breed of people, people who had aspirations for our country... they just did not want to depose the Brits....they wanted a different country, where all were equal. I am grateful to this group for this sacrifice for me, I will never stop being grateful. This process was sullied by Dev & McQuaid they sewed it up for themselves, they killed their brothers in the process. Neither of those 2 are worthy of a mention, Those people of Ireland believe in damnation, they believe, to their detriment, that church & state are right. Jack, knowtoomuch, Phil & Anthony..........we are the minority. But just maybe we can make a difference. Maybe the outcome will be different, at some stage someone will read between the lines!!!!!!!!!!!!!!!!!!, and ......

I just returned from a visit to Ireland and this is what I saw. At the national level people are outraged by the carry on (bankers, developers, politicians and church). However at the local level everybody seems content with their local TD, priest, and so on.
The system is built this way to keep everyone in line.
Sadly I can't see it changing. Sure FF will suffer in the next election - odds are though that they will be back in power within 10 years.

It is the vatican's fault. The directors on the Central Bank of Ireland and various other quangoes who were placed in there by the Vatican, caused the problem.

It is all very clear. If we remove them, then we will be able to praise ourselves for being modern and everything will be fantastic.