News | Markets | Interviews | Media and Marketing | International | Technology | Personal Finance | Recruitment | Motoring
Crisis will not be over when our bailout package runs out
Eurozone finance ministers meet tomorrow to discuss ways to prop up the euro, but is this too little too late for Ireland?
Eamon Quinn reports 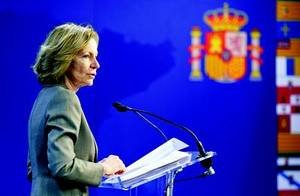 Elena Salgado, Spain's finance minister: the pressure on both Spain and Portugal remains intense, as reflected in the increased cost of borrowing. Spain's three-year borrowing rate climbed in the past year to 3.75% from 2.2%. Its 10-year rate this weekend was 5.4%, up from 4%

More than eight weeks after agreeing to a €67.5bn bailout, there is still compelling evidence from the international markets that Ireland and other stressed eurozone states will still be in crisis by the time international aid runs out.

Eurozone finance ministers meet tomorrow to discuss ways to strengthen the defences of the currency, but their deliberations will focus on constructing higher defences and, even then, only from mid-2013. The talks, which will also probably touch on an undeniably punitive 5.8% "blended average" interest rate facing Ireland for its bailout money, will focus primarily on the plans by Germany and France to make private lenders take potential losses on the chin.

But the sovereign debt markets and the debt insurance markets continue to signal that Greece and Ireland cannot get out of their respective messes without renegotiating with their sovereign lenders. The insurance market, through credit default swap contracts, sees Ireland as the fourth most likely in the world to renegotiate with its existing sovereign lenders. The markets say there is a 42% probability that Ireland faces some sort of default in the next few years. Pakistan is only slightly higher with a 43% probability, while Venezuela at 51% and Greece at 56% are the riskiest sovereign borrowers.

Another significant marker is that Ireland's agreement on the international loans has failed to lower the interest rates on existing debt paper. Investors trading Irish debt continue to require significantly higher rates to handle the paper, even as the market continues to be supported by the holdings of the European Central Bank.

The annual interest rate for Ireland to borrow for three years, at 6.3%, is higher than four weeks ago. The rate on ten-year money, at 8.4%, has fallen from over 9% but remains higher than the mid-December rate.

"Things have not dramatically changed over the last month or so. Ireland still has a huge mountain to climb to reduce the deficit and there is a real fear that the huge squeeze will push the economy deeper into a severe recession," said Ben May, European economist at Capital Economics. "The insurance markets are pricing in a big possibility of a government default and we have no reason to believe that they are overstating those risks," he said.

May said any finance ministers' discussions would need to consider "substantially lower" interest rates from the eurozone to make any difference to Ireland. "A reduction would change people's perception of Ireland. Whether or not it is enough to change Irish public finances is another matter. We would need to see quite a substantial fall. A small cut to 5.5% (from 5.8%) would not make much difference".

If Ireland returned to the markets in two-and-a-half years paying 7% or 8% to borrow for ten years, the international loans would have offered only a temporary reprieve.

UniCredit in London, commenting on the agreement last month by eurozone ministers to set up a European Stability Mechanism from mid-2013, said there was "no silver bullet" for the European debt crisis. The ministers see the ESM replacing the temporary safety net of Klaus Regling's bailout fund, which was hurriedly put in place after the bilateral loans used to rescue Greece last May.

It opens the possibility that euro governments can force some sort of discount onto private lenders but only on new debt taken on after mid-2013. That offers little hope to Ireland, burdened as it is by sovereign debts raised before 2013.

However, Professor John FitzGerald at the Economic and Social Research Institute said the chances of Ireland defaulting are very low.

"The cost of a default is massive for a sophisticated economy like Ireland. You would not want to do it unless you were desperate." He said Ireland will not face that dilemma because economic growth over the next few years will make the debt burden bearable and in time cure the debt crisis. Only some additional "catastrophe" from the banks would lift the burden substantially.

The test of whether the ESRI's forecasts is for growth this year is correct will come by mid-June.

"It will become clearer by the middle of this year. It is only if you get no growth in the economy for a number of years does the debt become a problem. But you need something significantly to go wrong before then," he said.

Meantime, the markets and international commentators continue to be sceptical.

No solution in sight

Portugal and Spain still under pressure

Despite Portugal and Spain "successfully" tapping the debt markets for cash to fund their deficits last week, the pressure on both eurozone countries remains intense, as reflected in the increased cost of borrowing.

Portugal's cost of borrowing for three years, which jumped to over 6% during the Greek crisis in May, was at 4.6% this weekend, still up sharply from below 2% a year ago. Its ten-year rate, at 6.75%, has increased from 4.2% a year ago. So, there is no sign that the market believes the Portuguese economy is strong enough to pay off its debts without external loans.

Spain's rates have also soared. Its three-year borrowing climbed in the past year to 3.75% from 2.2%. Dramatically, its ten-year rate this weekend was 5.4%, up from 4%.

A long-term solution to the European debt crisis is still a long way off. Gabriel Stein, chief European economist at Lombard Street Research, said tomorrow's talks will likely achieve little: "The main thing is that the ESM is not some permanent resolution of the crisis".

Indeed, he believes the crisis will deepen. "Belgium and Italy are the opposite of Spain. Spain has a budget deficit, not the debt that Belgium and Italy have. But it appears markets are not prepared to accept either."

I take issue with Professor John FitzGerald's assertion.The total debt of the country both sovereign (incl IMF/EU bailout) and private must be approaching Eur500bn. No way can Ireland with its small population export its way out of this.Even if we could it would take too long for Mr Average to stomach 20 years of pain.We are heading back to the punt and default.It was telling last week the it was the Central Bank and not the ECB that provided liquidity of Eur51bn to our banks.This is quantitative in disguise.It would be better if newspapers and professors of economics stopped the spin and got honost with people.
Anthony