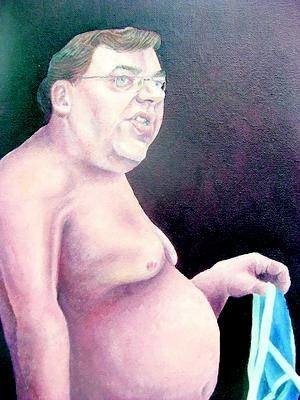 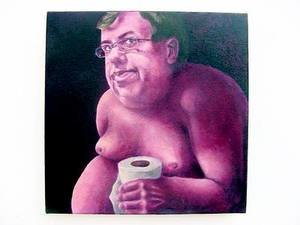 GARDAí are on the hunt for an anonymous prankster who hung a nude portrait of Taoiseach Brian Cowen in the hallowed halls of the National Gallery.

The still unidentified renegade artist had painted Cowen as he was sitting on the loo with a roll of toilet paper in his hand. The painter's attempts at lifting the country's spirits certain­ly worked as dozens of visitors to the gallery last week were left chuckling at the unorthodox artwork.

One woman commented: "Well, at least that is one mess he has been able to clean up."

The bizarre prank began earlier this month when the artist calmly walked in the front entrance of the National Gallery carrying a shoulder bag.

He perused a number of rooms before making his way to the National Portrait Collection of the National Gallery, which features paintings of Ireland's most famous citizens.

The unidentified artist first stuck up a prepared caption for the artwork, which matched up exactly with the explanatory notes for the painting.

It read: "Brian Cowen, Politician, 1960-2008. This portrait, acquired uncommissioned by the National Gallery, celebrates one of the finest politicians produced by Ireland since the foundation of the state.

"Following a spell at the helm of the Department of Finance during a period of unprecedented prosperity, Brian Cowen inherited the office [of] Taoiseach in 2008.

"Balancing a public image that ranges from fantastically intelligent analytical thinker to big ignorant f**ker from Offaly, the Taoiseach proves to be a challenging subject to represent."

He then went on to hang the portrait of Cowen, sitting naked with a roll of toilet paper in his hand. The unflattering picture hung for over an hour and hundreds of patrons of the gallery passed it believing it to be a genuine part of the collection.

The National Portraits Collection consists of around 50 paintings of famous Irish people including modern celebrities such as Bono and Gay Byrne along with historical figures like Michael Collins and William Butler Yeats.

When the prank painting was spotted by security staff, they immediately took it down and brought it to the attention of gallery management. Gardaí from nearby Pearse Street station were called to the scene where they examined the portrait and CCTV footage.

Bemused officers told management, however, that it was unlikely the rogue artist had committed any type of criminal offence.

It later emerged that the mystery painter had hung a second nude portrait of Cowen holding only a pair of y-fronts in the nearby RHA Gallery on Saturday afternoon.

A National Gallery source said: "It wasn't a question of having vandalised or damaged any of the paint­ings, just adding another one to the collection.

"It was obviously something that had been planned for a long time as the frame of the painting and the caption had been matched closely to portraits already there."

A statement from the National Gallery said: "The gallery does not allow unauthorised displays. One can only surmise that it was an action by someone seeking to use the gallery for self-promotion or other reasons."

Biffo on the bog!

Excellent. I for one would like to commission the piece, if only for the upcoming elections.

Political Satire at its best! I'd love to know where the paintings have ended up.

that person deserves a medal!

Political art should be venerated a lot higher than any of the cheap impressionist tat that's in there. People are walking, Talking, Cowen better do something quick or end game starts.

this is SO BRILLIANT! kudos to the artist for being so clever.

A work of true brilliance rivalling Caravaggio at his best.

class act! This t most brilliant idea ever!! The mind of a Stephen King and t artistry of a Da Vinci! Genius!

Whoever hung these paintings should have a national holiday named after them.

Sir I salute you

Whoever did this is a total legend!

and we must continue to tear into the core of this inherited sham of governance, strip it bare with ridicule and satire and honest scrutiny until it can't wipe its ass or change its jocks without us approving every minute detail of its passing....Bravo!!

absolute public hero! BANKSY hangs painting in louvre in paris...'much'!? check out the banksy book 'wall and piece'!pure genius!! how can i buy even a copy of these 'Works of art'...to hang gloriously in my sitting room!

Commenting from an english perspective this is truly fantastic and a great tribute to the Irish sense of humour - well done on the field lads!

bravo WELL HUNG [ the paintings that is,,,,not the subject, he. he ] Told ye turn out the lights did'nt I.

Nice to see someone talking through their arts - a change from what we get from Cowen and the other leading lights of Ireland.

Better that he has a toilet roll than a pint of stout in his hand. Maybe he can use it to clean up the mess to be left on all of us over the coming budget!

Truly great art reflects what the collective conscious struggles to express.well done ,you are a true warrior and giant of an artist.More power to your creativity.Your authentic art deserves to be hung in our national galleries.

Has anyone spared a thaught for the poor hundred people who saw this, were they ok?

Cannot stop laughing!! If there is any serious note to this it's that it's not far off the mark. Genius artist, well done. This is legendary!!

I think this "artist" was very "hard up" for something to paint......Would he/she portray his/her parents in the same way and put their picture/pictures in a public place...Perhaps not not on his/her own doorstep.I hope artist gets all the attention that he/she seems to be craving!

RTE reported this story and later issued an apology for it. Demanding this apology and suggesting that the RTE Director General should resign is an outrageous attack on the freedom and independence of the media. i hope there will be no such apologies forthcoming from The Sunday Tribune. If the RTE DG can't stand up to such bullying tactics, perhaps he should resign.

with respect to Marcus' comment I think it should be fairly obvious that this was intended as act of Civil Disobedience. And since Brian Cowen has the lowest approval-rating of any Taoiseach since records began (as far as I know) it seems fairly well-deserved.

how about one of mary harney to complete the rogues gallery

Where can you buy this? Terrific.

Ireland - A land of saints, scholars and clever painters with an excellent sense what's funny- I raise my hat to you!

I love it. Cowen & Co are really making a fuss about nothing. He hardly expects a knighthood at this point in time.
There have been serious issues of misconduct/neglect of duties in other areas and these people get bonuses. Double standards or what.

perhaps a sumo annexe could include harney de valera and cowen.
in my humble duty to the country i did my best to service as many artists as i could.

Fantastic.... loved this story.. very Banksy... some day I'll do something like this...!

Perhaps a new style of paint has been born, "Art Biffeau"

Keep up the good work.

love the line brian cowan HANGING in the national gallery

Last Sunday's Tribune has reached an all time low. Its says alot about the editor and the so called artist, even the gutter tabloid press in Britain wouldn't stoop that low. Wasn't that a lovely mothers day for Brian's mother May, his wife Mary and two daughters. When Ian Paisley made an ignorant remark about Brian Cowen a couple of years ago the Irish people were none too happy. What the Sunday Tribune has done is far worse, its shows a complete lack of respect to Brian his family and also to the office of An Taoiseach. How would the editor feel if any of his family were treated as Brian Cowen was. He should show some decency if he has any and publicly apologise to Brian Cowen and his family for hurt he has caused them Mary and his two daughters in particular.

Cant see what all the fuss is about. If only he exercised as much hoopla about the crooked bankers as he did about a simple nude arty work!!!

Idon't see what's the problem with it? It's a piece of art expressing something that the artist wants other people to think about. We can paint ordinary people naked but when it comes to someone important there's a big uproar. Well done to the artist it's about time someone said something!!!!!

These comments are a disgrace. The Tribune and its editor should be ashamed of themselves. Ye have no repect for the Office of the Taoiseach, Brian Cowen himself or his family. This paper should have a long close look at itself.

Anyone know where to get the one of him taking a leak ?

Jes the Gardai out on a full force hunt now for the 'culprit' after 3 days! It took them about 3 months to go knocking on Anglo's door after they stole hundreds of thousands of our money. Ireland really is a police and polictical state now. If this artist gets done for this there really is no justice left.......

How sinister that our public service broadcaster should be told to apologise and, worse, should acquiesce so readily.

Listened to Michael Kennedy TD on the radio today (I assume the same who has posted here) and checked here expecting to be be confronted with shockingly offensive images. But these are nothing compared to political satire elsewhere. When are we going to get grown-up politics and politicians in this country?

Fair dues to the artist, makes me proud to be Irish.

For all of those on facebook show your support

The fuss this has generated is beyond a joke. Has a politician really called for the head of RTE to resign over this .... after all the things they have done and failed to do.
As for respecting the office of the Taoiseach, well I was brought up to believe that respect is earned. There hasn't been a respectable Taoiseach since Garrett.