Breaking News:
'I'm not going to put my life in danger to do the PSNI's job'
Northern Editor Suzanne Breen explains why she will not comply with police pressure to reveal her sources in the Real IRA 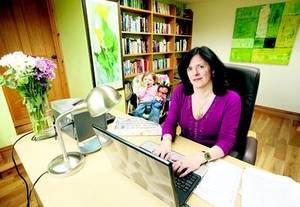 Suzanne Breen, and daughter Alanna, at work in her home in Belfast yesterday

On Monday, a Police Service of Northern Ireland officer arrived at my Belfast home with a letter. Detectives wanted my computer, disks, notes, phone, and any material relating to stories I'd written about the Real IRA.

I was given three days to comply. If I didn't, they'd seek a court order under the Terrorism Act. I won't be complying. The duty of a reporter to protect their sources is part of the National Union of Journalists' code of conduct. It doesn't matter whether those sources are police, paramilitaries, politicians, or civil servants.

Compliance would also destroy my livelihood and life. No organisation or individual with sensitive information would trust me again. If I did what the PSNI wants, my life would be in imminent danger. The Real IRA is utterly ruthless.

It shoots men delivering pizza to the security forces. It doesn't grant special status to journalists who, in its eyes, "collaborate". My Sunday Tribune stories related to the murder of two British soldiers at Massereene in March and that of Denis Donaldson three years ago.

Both investigations are matters of great public importance. But it's the job of police, not journalists, to bring those responsible to justice. The information I have about both attacks was printed in this newspaper. It's in the public domain.

I've no other information to substantially advance the police investigation. The Real IRA don't tell journalists their gunmen's identities. I wasn't allowed to record my interview.

The resurgence of republican violence has undoubtedly placed the PSNI under immense pressure. But, in pursuing the Sunday Tribune, they're engaged in a charade at best, harassment at worse.

Protection of sources is vital for press freedom in a democracy. Compromising sources undermines the press's role as a public watchdog and damages its ability to provide accurate and reliable information.

In our Easter Sunday edition, we printed a Real IRA statement calling Martin McGuinness a traitor, admitting Denis Donaldson's murder, threatening young PSNI recruits, and warning that dissidents would "strike at the British occupation forces wherever and whenever we decide".

We reported that this statement would be read out by "a member of the republican movement" at the 32 County Sovereignty Movement commemoration in Derry city cemetery the following afternoon.

We didn't attempt to hide the Real IRA's plans – which would undoubtedly have helped the organisation. The police had over 24 hours' warning. Yet, they did nothing. A masked man in full combat gear appeared and, to loud cheers, read out the statement.

There wasn't a PSNI officer, nor helicopter, in sight. So the police didn't see fit to take immediate action to arrest a paramilitary in a balaclava making chilling threats, but want to pursue a journalist for writing a story.

They're targeting the messenger, rather than those behind the message. The PSNI's attitude to the Sunday Tribune since the Massereene killings has been disingenuous.

Immediately after I took the Real IRA's claim of responsibility, I was phoned by gardaí. Days later, a senior PSNI detective requested I make a witness statement and hand over my phone records.

After consultation with my editor, I declined. The detective said he wasn't into "forcing" people to do things.

Ten days ago, another detective invited me to speak to police unofficially. If I didn't like their questions, I was under no pressure. I could walk out of the meeting. I declined the offer. The PSNI showed their true intentions with the letter from Detective Chief Superintendent Derek Williamson.

The police's attitude over the years to interviewing paramilitaries and claims of responsibility has been inconsistent. I took the INLA's claim for the murder of an alleged Derry drug dealer. The PSNI haven't pursued that. Is there a hierarchy of life, with the death of soldiers above that of a civilian?

The 'disbandment' of the RUC was meant to usher in a new enlightened area of policing in the North. Not always so. Six years ago, the PSNI raided the home of journalists Liam Clarke and Kathryn Johnston over an alleged breach of the Official Secrets Act.

In their biography of Martin McGuinness, they'd published his conversations with Mo Mowlam. The five-hour search of their home was intrusive and intimidating. Heavily armed police emerged from four armoured vehicles and unmarked cars.

There was no female officer, even though Johnston's personal belongings and her children's rooms were ransacked. Johnston was arrested, although no child-care arrangements were in place for her eight-year-old daughter.

Even today, Johnston is highly emotional describing "this violation". Police inexplicably took away the children's games, the couple's bank statements, photographs, and pay-slips. During the five-hour search, the couple were banned from phoning a solicitor, employer, or friends.

It seems police make political judgements to act in certain cases and to ignore others. I've previously taken Provisional IRA claims of responsibility during its campaign. I've conducted many interviews with its representatives but have never been approached by police.

In 1993, a week after the UDA killed six Catholics, I interviewed its 'Inner Council' for the Irish Times. They declared Irish government ministers and SDLP leaders "legitimate targets".

They said civilian casualties were "inevitable in a war situation" and spoke of bombing the Republic. Unlike the Real IRA, UDA figures openly offered personal details for publication. One disclosed he'd been in the British army but had left aged 20. Police never contacted me about any of this.

In other interviews, some UDA members wore masks, others didn't. Some removed their balaclavas to eat fish and chips. They boasted of murdering Mickey Edwards, a Catholic shopkeeper shot dead in bed with his wife. His six children had run into the room, screaming at their daddy not to die. Again, detectives never even phoned me.

Indeed, printing the Real IRA interview was welcomed by some of those it named as targets. One informer, Kevin Fulton, wrote a letter of thanks to this newspaper. Informers Raymond Gilmour and Marty McGartland also appreciated our interview. They contacted MI5 to discuss their security. Without our story, the security services mightn't even have informed them of the threat.

Ten years ago, the PSNI pursued the Sunday Tribune's then Northern Editor, Ed Moloney, who wouldn't hand over his notes on UDA member Billy Stobie, who was charged with Pat Finucane's murder.

Moloney, who potentially faced five years' imprisonment, courageously refused. He won after a lengthy legal battle. He believed that would "make the authorities think twice before they try to do this against a journalist again". He was wrong.

A decade later, the PSNI is pursuing the same strategy, against the same paper, with a different Northern Editor. It didn't work then, and it certainly won't work now.

This is disturbing news as we were supposed to have left such imtimidatory tactics behind post GFA.
Ms Breen should not be pressurised because of her reporting and if journalists were to comply with these type of requests there would be no more sources coming forward and therefore, no more insights into groups like the RIRA. Well done Suzanne Breen and Well done The Tribune for backing her up.

Suzanne Breen is being pursued by the same repressive outlook that hounded Ed Moloney and Liam Clarke. They won the battle against a police determined to encroach on journalists' freedom to do the job society requires of them. She is making a proper stand and deserves the support of all her colleagues and wider society

This is disgraceful. Journalists should have all the freedom in the world when researching and publishing stories of national interest like the IRA. It's typical of the powers that be wanting to put down the people who are trying to make a difference. If they take this further your going to have support from all the nation with regards to this because the public thinks its ridiculous. Best of luck

Suzanne is to be admired for standing firm against what amounts to an attack on her professional standards and our democratic freedoms.

A few months ago the security services/PSNI were implying they knew when a member of the RIRA was passing wind. Now they are trawling for information from a journalists out takes.

It seems it is not only the RIRA who have reverted to type.

Suzanne Breen is not exaggerating when she says the real IRA are "utterly ruthless". Only a few weeks ago the Tribune (Suzanne Breen) published an interview, story with a leading RIRA member in which they (RIRA) issued death threats, against myself and others. The RIRA have shown, in recent weeks, what they are capable of. The recent threat against her by the PSNI to hand over notes, computer, telephone, records will place not only Suzanne Breen in danger but others around her including friends, family and neighbours if she were to comply with such a ludicrous request, I have no doubt the RIRA would target her. Suzanne Breen and the Sunday Tribune should be congratulated for the work they do, not treated like common criminals. The information which the Police are now demanding from Suzanne Breen will already be in the hands of the British State, given MI5 are now well established in Holywood and given that they monitor all digital communications, record telephone conversations etc. This is simply a British Government bullying tactic which they have used many times. Suzanne Breen, Sunday Tribune are right to refuse to comply with such requests. I have little doubt that if the British Government do try to play hardball, they will get egg on their face once again. I also suspect that Sinn Fein have had a hand in this farce given that many of them are now paid British Crown Servants.

Kathy and I have been through this hassle ourselves with the Bloody Sunday Tribunal, the Martin Ingram case and the raid on our home over leaked telephone transcripts. One or two others as well. Normally these cases fizzle out but you can never be sure they will so there is considerable strain. Its good that Suzanne’s paper is backing her so strongly, that can make a big difference. Well done the Tribune.
Journalists have little choice but to stay schtum in these circumstances, handing over your sources to the police brands you as untrustworthy and means that people reluctant to speak to the police won’t speak to the press either. That means less information comes into the public domain and the purpose of a free press is defeated. Journalists also become afraid to publish what they know - in other words they stop doing their jobs.
One journalists who did break confidence was Nick Martin Clark. He gave evidence against Clifford McKeown, a loyalist killer, who boasted of the murder of a Catholic taxi driver and made it plain he would kill again during a prison visit. As a result of giving evidence Martin Clark had to enter a witness protection scheme and stop visiting Northern Ireland. We can argue the ethics but in practical terms its as simple as this – if you pass on details of sources you can no longer function as a journalist.