Breaking News:
Michael Clifford - "People are afraid to let go of their anger. If we are no longer angry, those who got us into the mess are going to walk away from it" 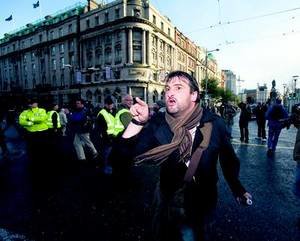 An angry protestor at Friday's Ictu-led march in Dublin

How are you feeling this morning? Happy, sad, content, agitated, well, unwell, healthy, hungover, refreshed, tired? Take your pick. Across the nation, people exhibit a whole gamut of emotions of a Sunday morning.

Now, how are you feeling about the state of the country? There's only one answer to that. You are angry.

Everybody is angry. Last Friday, the trade union-organised protest was really a forum to express anger. It was called a day of action. It should have been called a day of rage.

Anger permeates every section of society at the moment, apart from bankers and developers who've nobody but themselves to be angry at. Their anger can only turn in on itself, which calls to mind something WB Yeats once said: "Out of the quarrel with others we make rhetoric; out of the quarrel with ourselves we make poetry." Maybe in a depressed jobs market all those bankers and developers will become poets.

In Monday's Irish Times, a whole range of young people expressed their anger at having to emigrate. To be fair, they were a little self-righteous in their anger, so off with them.

On Wednesday, the National Concert Hall in Dublin hosted an evening with "four angry men", all authors who have books out about the collapse of the economy. The audience was reportedly a thousand angry strong.

Even the most placid among us are angry. Craig Doyle, the TV presenter with the winning smile, told a recent interviewer: "I'm angry at everything… especially the common misperception that I'm the boy next door." If you live next door to Craig, keep the head down.

Anger is reputed to be the second stage of grief. It follows denial and precedes respectively bargaining, depression and acceptance. By that account, we have a long way to go before closure of our grief over the fall from economic heights.

Nationally, we believed our own horse manure. We were in denial of the fact that unprecedented prosperity could be achieved by flogging houses to each other. We were told that history was history, no longer destined to repeat itself, and most of us lapped it up because we wanted to believe.

Now we are at the anger stage, and it would appear that we are stuck there. The nation began getting angry around the autumn of 2007, when Bertie Ahern told us he was entitled to a €38,000 hike in salary just as the unemployed register was heading north at a rate of knots. Gradually, since then, things have got worse, and with the emergence of each fresh depressing economic indicator, the anger graph has taken another leap.

Under normal circumstances, we should be moving onto the bargaining phase. Last week, Brian Cowen told the Dáil that anger wasn't a policy, although measured against some of the policies the government pursued over the last decade, anger sounds perfectly coherent.

Cowen wants us to enter the bargaining phase. Such a move would embrace a growing acceptance of the pain that will have to be endured. This would be a sign that we are moving on, going forward and adding value to the national cause.

Except nobody is heeding the call. Most people are stuck in an anger moment, and, this column believes, with very good reason.

A lot of people are afraid to let go of their anger. Their fear is rooted in the belief that if we are no longer angry, then those who got us into the mess are going to walk away from it without shipping any responsibility.

This fear of impunity is well placed. For instance, over 10 months after the initiation of a criminal investigation into aspects of the banking crisis, there has been no result, one way or the other.

The subject of investigation is complicated, but it is also a matter of vital national interest, yet there does not appear to be an urgency on the part of the authorities. How can people move on from anger when such questions still remain to be answered?

Apparent impunity among the powerful isn't just confined to alleged criminal activity. There is no sign of Seán FitzPatrick or the Anglo Irish golden circle having to answer fully for landing that bank in such a mess. It is as yet unclear whether the taxpayer will have to pick up the full tab for the jolly time had by all in the halcyon days of the bubble.

Nama is a source of anger that won't go away. The agency is largely based on trust. Yet the feeling persists that banks will sail back into profitability as this and future generations pick up the tab for the recklessness that ruined the economy. (By the way, anybody applying for a job as a board member of Nama will be obliged to undergo an anger management course). How can anybody move onto the bargaining phase whiles serious questions hang over the operation of Nama?

Voters are holding onto their anger. It's as if they are aware of their own short-term memories, but this time they are determined to ensure that will be political accountability for the mess we're in.

With impunity persisting at every level, there is little chance of the anger dissipating.

Here's hoping we'll learn to better compartmentalise that unsettling emotion, distilling some use from it, but chilling out at the same time.

Agreed, agreed and agreed.
Now, before we all lose our collective memories, like so often before, let us all please please decide to do the one simple thing that we can do, quite easily, in the name of justice. It is also the one thing that all the politicians who sold us down the river fear worse than anything else.
Yes, let us all decide to NEVER, EVER AGAIN RE_ELECT ANY POLITICIAN TO THE SAME SEAT. Yes, vote for new, virgin candidates only, in every election, at local and national and european levels.
Yes, no re-election, for ANY politician. Political experience is a handicap, not an asset. TD's time in the Dail or councillors in the council only makes them more expert at stealing from us, like prisoners in Prison.

Of course We're angry- We're as mad as Hell- We're fuming- The pressure of seeing the Country going down the tubes is starting to get us down- I think I'm about to blow a gasket...
The Economy is crashing all around us and We feel helpless to what to do next? This voice in the back of my head is telling me get out- my bags are packed...

As a matter of interest that Angry Protester on the picture looks like the same person who had a brilliant rant at Pat Kenny on the RTE Frontline progamme on Monday night.
Now He had no problems letting his Anger out- it was a joy to behold seeing him unleash a tirade of abuse at Pat Kenny- mind you I still think Pat's a good presenter- perhaps a bit overpaid but still good at his job..