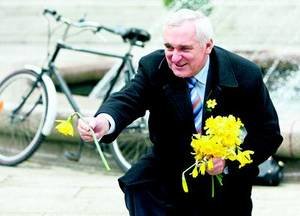 Fears that an international forestry firm chaired by Bertie Ahern could soon own 7% of Ireland are to be raised in the Dáil this week.

Sinn Féin's natural resources spokesman Martin Ferris said he wanted the government to allay fears that an international forestry body, of which the former taoiseach is chairman, is about to make a bid to buy Coillte, which owns 7% of the land in the state.

Colm McCarthy's 2009 An Bord Snip Nua report suggested that the state could garner "once-off receipts for the exchequer" through a "review of the operations of Coillte with a view to realising optimal return through rationalisation, asset disposal and, possibly, privatisation".

McCarthy is now heading up a body which is looking into the potential fire sale of state assets such as Coillte.

According to Department of Finance accounts for last year, Coillte is the most valuable state asset, with a net value of over €1.2bn. This is not the worth of the trees but the value of the land on which they are planted.

Earlier this year, the Sunday Tribune revealed that Ahern was appointed chairperson of the International Forestry Fund.

Significantly, a spokesman for the fund confirmed to this newspaper some months ago that the fund would consider an acquisition of Coillte.

A spokeswoman for Ahern said this weekend that "as he understands it, the International Forestry Fund has no intention of putting in a bid for Coillte".

Ferris will raise his fears about the potential sale of Coillte in the Dáil because "7% of our land could be sold to a private corporation. It is no coincidence I think that the expression of interest follows on the McCarthy report that Coillte be either privatised or asset-stripped, and the pressure on the government to sell off state assets as part of the IMF programme.

"This cannot be allowed to happen. Our forestry and the land are key national assets."

Ferris added: "I will allow others to make what they will of our former taoiseach's part in all of this."

However, Paul Brosnan of the International Forestry Fund said no bid had yet been made despite rumours of an impending sale.

"I can confirm that the International Forestry Fund has not made a bid for Coillte's assets... but I will keep you informed if we ever do," he said.

Based in Switzerland and Liechtenstein, it claims it can give the benefits of an offshore bank account to ordinary investors.

How does Ahern have time to chair a private corporation when he's getting paid about a hundred grand a year as an elected TD?????

This is unbelievable, for Ahern to be involved in this is nothing short of treason. He should be sacked and thrown out of the Dail immediately.

Just a change in government, move from the predictable, this chappie has an office, & bedsit attached in Drumcondra and a large income from the State. What is any commission doing putting this chap on a board? He ruined our country, probably the worst leader in the history of Ireland. This has to stop.

Well done Bertie that's about €276 an acre, at that rate the whole country is only worth about 17 billion, it wouldn't even pay for Anglo's bailout never mind the IMF.

Nothing changes.
This man! was one of the main players in bringing this country to its knees. He is not worthy to be a TD. Then again people get what they deserve.

What is this utter boll**x about selling 7% of Irish land????Its not for sale,END OF STORY,we sold off our natural resources for sweet FA,there will be blood on the streets before one inch of Irish soil is sold,this is a final step too far!!
1.2 billion?dont make me laugh.

Fair play to Marty Ferris - although I would have thought his expertise would lie off shore - marine and boating.....

It was naive to think that if we left him alone he would stop doing us damage. Some people will never change unless they are stopped.

Daithi - E276 per acre - hahahaha - this is about carbon tax. We'll end up paying these companies to keep growing trees for us.

This was highlighted on the property pin website last May! Main stream media playing catch up. Again!

Hey guys, why not grab Bertie by the b...s for a change and ask him for explanation ? Another wonderful twist, irish political life is so fascinating, what next, Corrib Field offered to a private company ? Oh wait a second..

Woodland League have been doing great work raising the alarm about this,
http://www.woodlandleague.org

and have a petition here
http://www.thepetitionsite.com/2/help...

When interviewed recently by a Polish newspaper, Ahern said "I might make a run for it [The Presidency], I have a lot of time on me hands since I resigned as Taoiseach"...ABSOLUTE APPALLING that this gluttenous ogre is being paid as a TD for writing books and columns, chairing private companies and making ads for News of The World.

I am starting to lose faith in irish people; Ahern really does need to be tried for treason.

"But fumble in a greasy till. And add the halfpence to the pence. And pray to shivering prayer, until. You have dried the marrow from the bone."

The 7% of our land could be sold to a private corporation?...it would be nothing short but the return of "Landlordism" ... we know how we battled that before lads , such fine forests ... be shame it anything were to happen to them!

Does this really suprise anyone? Almost all of our TDs still have other incomes, and someone as bad as Bertie is not going to let all those years as Taoiseach go to waste when there is money to be made. If he has to sell the whole country to do so, he will. Actually, they have!!!!

I would plead with our investigative reporters to keep on top of this story - it is shocking what Ahern is capable of doing. As much as I despised Haughey - his words about Ahern are true. I have always been bewildered why so many have not seen through him.

The Irish people are a laughing-stock to put up with this kind of thing. Daily now there's some disgusting revelations of greed at their expense. Yesterday it was a piano-player: today it's a man with almost as many keys given his offices - some funded by the state - and a man who pulls more strings than a large orchestra.

Carbon sequestration (Controlled Disposal) rates vary by tree species, soil type, regional climate, topography and management practice. If its taken that 1 acre of Pine forest sinks roughly one metric ton of carbon per year(Birdsey 1996) at €30 per Tonne (presently €15 per ton, budget to propose a €10 increase to be followed by another €5 increase, this will also increase over the years) this would provide a simple payback of 9 years if Dathi's €276 per acre is correct, not bad for Bertie and his cronies.Where he would put all the money with not having a bank account i dont know, but he would have plenty places to bury it. The EUETS is the world's biggest carbon trading system, worth about €70bn ($93bn) last year, this will be the next property boom and Bertie doesnt want to miss out.

Stop picking on the man Fintan O'Toole wanted as Taoiseach after the last general election.

Obviously the Swiss are not to smart, picking a man who looked up all the trees in North Dublin and who seen nothing there.

And to think he does all of this while living in a cupboard---the mans a genius.

Listen,
Irish people are gimps. Always have and certainly always will. Too worried, but even more ignorant and impotent to do anything about it.

The weak will always fail. Even our own police are training to contain us, when we ever decide to make a peep.

Irish impotence, what a sad sorry joke we all are.
Who is going to prove me wrong? Anyone? No? X-Factor still on is it?
Didnt think so.....

No shortage of neck here.
We should have had a clue when his friends had to give him a dig out. It only stands to reason that he'd screw up the economy of our Nation as well.

We are already giving away our energy resources to foreign financiers (bond holders). Colm Rapple has pointed out that the license to explore for on-land gas deposits is up for grabs instead of being available exclusively to An Bord Gais. And Minister Ryan is licensing off our off-shore wind resources to foreign interests. The result: we will buy back our own energy from foreigners at market price and the profit will be invested elsewhere. We are back to the absentee landlords again. We have got to shout stop.

Mike#23 - I'll agree with you if we don't do anything in the next 3 months to reinvent the way things are done in Ireland. By reinvent I don't mean electing FG/LAB. Unfortunately, the odds favor you.

I hear ya Mike.On the Joe Duffy radio phone-in the day before another bit of their lives are shattered,what the big topic for debate?..the X-factor!All dem der English jokes belittling the Irish..can you blame them every time Healy-Ray opens his big dopey gob!The Germans are not laughing though.I would be interested to know how many Germans who bought homes in Ireland over the last years have fled the place in embarrassment?

keep on top of this story. What other politicans and busnessmen have a vested interest in robbing our land.No need for them to go offshore with the money. With our banana republic corporation tax they can launder the money through the financial centre in Dublin.congratulation to Martin Ferris and Sinn Fein for exposing this scam.

Only 7% of the country !!! christ was he asleep when they was selling of all our natural resources for NOTHING......

we urgently need the 2nd Republic to get rid of all the gombeenism, 'cute hoorism' that pervades society especially that arrogant F F
party and yer man .