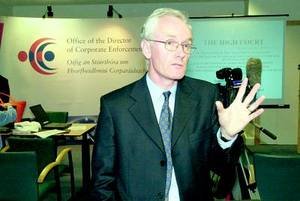 Several employees of Anglo Irish Bank are expected to be arrested before the end of February as Gardaí continue their probe into the bank's activities. The investigation is understood to be focusing on the alleged falsification of loan documents and a Garda source said that the activities of a mid-single digit number of people are being concentrated upon.

The Gardaí are likely to ask solicitors for copies of certain loan documentation in the coming weeks so they can compare them with those held by the bank.

The bank is currently the subject of investigations by the Office of Director of Corporate Enforcement (ODCE) with assistance from the fraud squad. The ODCE had no comment last week. It is almost a year since the ODCE seized 20 large boxes of documents and computer records from the bank's headquarters on St Stephen's Green.

Separately, the Sunday Tribune understands that a significant customer of Anglo Irish faces challenges in meeting its loan conditions to the bank. The company is considering downsizing its operations. Its long-term loans agreements with Anglo depend on the company hitting agreed profit targets. But those profit targets are under pressure because of the general slump in economic activity.

Meanwhile, the bank is continuing to engage in talks with Green Property about the disposal of part of a €1bn property portfolio to the development company. Progress is said to be extremely slow but a deal is said to be on the horizon. Last year Green Property bought a €750m property portfolio from AIB, which had seized the properties from Greek businessman Achilleas Kallakis, who is under investigation by the Serious Fraud Office (SFO) and City of London police for alleged fraud against Ireland's second largest bank.

The SFO said last week that it will not name other banks which have been affected and will only identify them if there is a regulatory obligation to do so and they have no further announcements on the investigation.

Anglo has so far received €4bn from the State and will require a cash injection of several billion to restore its finances.

"a Garda source said that the activities of a mid-single digit number of people are being concentrated upon"
If a garda is the source of the above, please, arrange for 'ordinary English' classes for him/her.
If it is the journalist's interpretation of what the garda source said, then please send that journalist for classes in direct, plain English.

The more brought up on charges the better! There will be no shortage, as they were given carte blanche by the cronies in power.

Sure NAMA already owns your house, you can't use it gambling!

Laca - it is dangerous to gamble with property.

Well, we've been waiting 6 years for the Flood Report "7" to be charged so all bets are as safe as my house (no mortgage)

Comments are moderated by our editors, so there may be a delay between submission and publication of your comment. Offensive or abusive comments will not be published. Please note that your IP address (209.194.198.2) will be logged to prevent abuse of this feature. In submitting a comment to the site, you agree to be bound by our Terms and Conditions