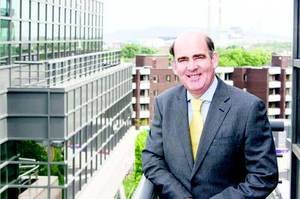 Staff at Irish Nationwide have been told to pull out all the stops in a massive effort to increase mortgage lending at the state-owned building society by 700% next year, according to sources briefed on the matter.

The nationalised lender is beginning a major push to write at least €160m in new mortgages in 2011, after issuing just €20m this year, in an effort to make the business more attractive to potential buyers. Management is targeting €325m in new business for 2012, as well.

Management told staff that INBS has no future as a stand-alone entity – the building society will ultimately need €5.4bn in state help to meet minimum capital standards – but no interested buyers have come forward yet. In the meantime, it will add to the €2.5bn mortgage book left over after the lender transfers more than €8.5bn to Nama.

Irish Nationwide is aiming to do 40% of its new lending through brokers – not a traditional sales channel for the branch-based lender. Chief executive Gerry McGinn has appointed former Bank of Scotland Ireland head of mortgages John Kelly to lead the charge. However, management said the 44 retail branches would remain open to drive new business.

In bad news for members, who lost ownership of the mutual last year, Irish Nationwide's market leading deposit rates will be cut to help improve lending margins. The building society has long been a market leader in deposits, as it sought funding to support its expansive property and development lending through the boom.

Despite efforts to shore up eroding margins, the building society is still expected to lose money for another two years, management told staff.

INBS began work on turning around its business last month. The move, called 'Project SAM', brought in external marketing and IT experts to work on the plan. Former Bank of Scotland Ireland executive Antoinette Dunne was also hired to review the branch network.

The European Commission is currently reviewing INBS's business plan, but a decision could come as late as next summer, management told staff.