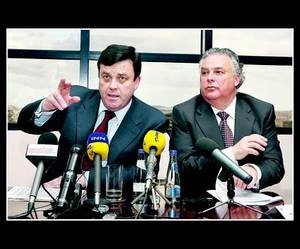 Peter Bacon: said 'you will have to ask them' in relation to why the government did not act on his advice

Two years ago this February, finance minister Brian Lenihan commissioned Peter Bacon, the economics consultant, to evaluate the options for cleaning up the banks from their poisoned property loans. Lenihan got the report the following month and in early April 2009, at a press conference held at the National Treasury Management Agency, an abridged version of the Bacon report recommending the establishment of Nama was published.

The speed of decision-making to set up Nama was not – in retrospect – surprising. Confidence in the €440bn blanket banking guarantee that Lenihan and Brian Cowen had introduced in late September 2008 was already fraying. It was not fully admitted in official circles by then but markets were already starting to push government interest rates higher. International government lenders questioned how Ireland alone could unveil a banking guarantee that assumed private liabilities amounting to more than 10 times its annual tax revenues.

Most people, apart from government politicians, have by now accepted that the failure to revise in quick time the banking guarantee was a lost opportunity.

At a minimum, a review in early 2009, as Nama was being established, could have lessened the taxpayers' coverage of the private bond liabilities of some banks such as Anglo Irish.

In the abridged version of his report, Bacon warned about the increased sovereign risk ever since the guarantee had been put in place only months earlier.

But for the first time Bacon has revealed that the full unpublished report sent to Lenihan went further, and explicitly named financial institutions, including Anglo Irish, Irish Nationwide, EBS and Permanent TSB, that should have either been "wound up", merged or their rumps repackaged and sold to private investors. The aim, he said, was to limit the taxpayers' exposure to the banks.

He told the Sunday Tribune that his unedited report explicitly advised that Nama should be established along with other measures, namely ordering a review of the banking guarantee and undertaking a major restructuring of failed banks.

"It is a matter of regret that the report was not published in full because people were relying on an abridged summary in the public domain," he told this newspaper. "There appeared to be good reasons at the time in terms of market sensitivity about the information contained in the report, which I accepted."

He acknowledged that the public debate about Nama, the banks and the September guarantee would have been "more comprehensive" if his report had been published in full.

Bacon said that the recommendations he made about the wholesale restructuring of the banks two years ago are only now being implemented.

In the full and as yet unpublished report, Bacon advised that Anglo Irish, Irish Nationwide, EBS and Permanent TSB be restructured.

He said that his report recommended "the consolidation of the rump of Irish Nationwide and Anglo to be sold to the highest bidder as a business franchise, or wind down the liabilities as they mature, and possibly consolidate EBS with Permanent TSB with a strong residential mortgage franchise assuming Irish Life capitalise it". The advice was clear.

He said he recommended a review of the blanket guarantee and restructuring the financial institutions to advance "a credible economic strategy" to bolster the workings of Nama. He said that the review he recommended of the banking guarantee included limiting the number of institutions and some types of bonds it covered.

Asked why the government did not act on his advice, he said: "You will have to ask them that question."

Bacon acknowledged that the discount Nama paid the banks for their commercial property loans was much higher than the undisclosed estimate he made in February 2008. But he said the prediction he had made in his full report about the eventual drop in property values was accurate.

He said he based his estimate in his report to Lenihan on the amount of discount Nama would pay on information from "direct enquiries" he made to officials. It was not based on estimates by PwC or other advisers to the government, he said.

But Bacon remains convinced that setting up Nama was essential because examining and disentangling property loan exposures was required work.

"The scale was so great that there was always going to be a significant chance that we would end up where we ended up – seeking external assistance in respect of sovereign debt – regardless," he said.

What was said in published report

"Moreover, the fact that it is evident that deposits have not stabilised as a result of the guarantee is compounding the perception that the contingent liabilities could become real.

"In the event, capital markets have not grappled well with the contingent liability of €440bn created by the deposit guarantee. The tendency has been to price Irish sovereign debt unfavourably.

"There remains the risk that the market may focus solely on the headline news, pushing CDS levels wider, unless the strategic plan is explained comprehensively and clearly."

On revising the credit guarantee:

"A restructuring of the guarantee consistent with the introduction of the Nama initiative should be seen as an integral element of a comprehensive strategy. In summary, the aim should be to enhance the credibility of the guarantee by simultaneously reducing the contingent liability under it and by extending its temporal scope in relation to the sort of long-term bond issuances which are critical to ensuring the covered institutions' survival."

If this is so, why did he not publish his full report to the public after it had been received by the MoF. Then the truth would have been available to everyone.

It would n`t have mattered one tiny bit if Jesus himself was to come down off the cross and tell Biffo not to guarantee the banks.Once Anglo was one of those banks Biffo was hellbent of saving his buddies and not even divine intervention was going to change that.

Just another proof - if it was really needed - that Ireland is not a real democracy and is ruled by dangerous and incompetent people.

Lynne, if you read the article again he states that the report was not published in full due to Market sensitivities. Either way it's history now.

The phrase in the US is 'monday morning quater-backing' - where after the football game everyone declares that they would have done something different after their team loses on sunday and that they said so during the game but the team manager didn't listen.

This guy is a clown. Any self-respecting individual who puts his reputation on the line wouldn't hesitate to voice his opinion publicly.

Biffo's bail-out saved not just his friends but also his political colleagues and their business partners and related insiders who availed of the "free loans" splurged out by that "piggy-bank" , when they were advised that the state would pick up the tabs and take all the risks.
The country was shafted and I remind you all that NO-ONE HAS OR WILL GO TO JAIL for the clearly immoral and corrupt but totally "legal-in-Ireland" con job that sunk us all.
When you pay your new taxes and watch your house value fall and your mortgage rise, remember the words of the EU Commission President, the other day: " You only have yourselves and your un-controlled and un-regulated banking practices to blame".
We know why all our politicians, including FF and FG, refused to pass standard legislation to control the banks.
Every TD has enjoyed that morally corrupt but quite "legal-in-ireland" cosy, "prostitute-client" relationship between TDs and banks and builders and big business for twenty years or more.
No-one is in jail yet. Do we need to go out onto the streets like in Tunisia, Egypt, Albania, Yemen and Algeria before the system is changed ? Martin is the new head of FF and could end up as a minister in a post-election coalition. He sat at the same dirty dealing table as Cowen, Bertie Ahearne and Lenihan, all through this scandal. Are the young going to stand for this ?

Comments are moderated by our editors, so there may be a delay between submission and publication of your comment. Offensive or abusive comments will not be published. Please note that your IP address (216.92.2.187) will be logged to prevent abuse of this feature. In submitting a comment to the site, you agree to be bound by our Terms and Conditions