'People did not die or take up arms for equality. They did so for Irish freedom'
Brian Arthurs and Peter McCaughey left Sinn Féin after the party signalled it was serious about working with the PSNI. They're now leading figures in a growing 'independent' republican movement, writes Suzanne Breen, Northern Editor 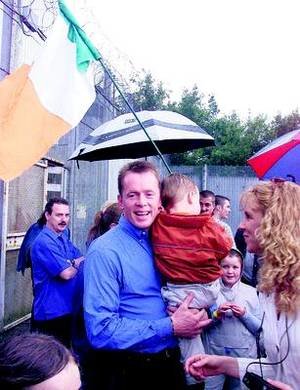 One of the most senior ex-Provisional IRA figures in the North has said that the nationalist community should not pass on information or "collaborate in any way" with the PSNI.

In an exclusive interview with the Sunday Tribune, Brian Arthurs, a former commander of the Tyrone Brigade, said Sinn Féin and "other constitutional nationalist parties" were wrong to say that the PSNI should be supported.

Arthurs, who once stood shoulder-to-shoulder with Gerry Adams and Martin McGuinness, said he had supported the Good Friday Agreement but had become very disillusioned with the failure to progress towards Irish unity.

Similar comments were voiced by Peter McCaughey, another former senior Provisional IRA member from Co Tyrone. Both men disclosed that they had left Sinn Féin two years ago after a major split in the republican movement in Tyrone.

Five Sinn Féin cumainn, and 90% of the East Tyrone brigade, left in the move. Arthurs said: "No one can deny that there have been changes in the North but it is an equality agenda being pursued. People did not die, they did not take up arms, for equality. They did so for Irish freedom.

"Yet a huge £100m MI5 building has been built in the North and 5,000 British soldiers remain here. A special British military intelligence unit has just been deployed in Derry.

"David Cameron told the Tory party conference that he was prime minister of Britain and Northern Ireland. He stressed the importance of the union and said, 'together is how we must remain'. Republicans cannot see Irish unity in any of this. It should be remembered that, as republicans, we were committed to fight on until Britain made a declaration of intent to withdraw from Ireland."

Arthurs and McCaughey both come from prominent republican families. Arthurs' brother Declan was one of eight IRA men shot dead by the SAS in Loughall in 1987. McCaughey's brother Martin, and another IRA member Dessie Grew, were killed on active service by the SAS in 1990.

A number of independent republican societies – named after the 1916 leaders and other republican martyrs – have now been formed in Tyrone. "We have six societies with around 200 members and we are in the process of forming another six," Arthurs stated.

He said the societies were "committed to upholding the ideals of the 1916 Proclamation and Irish national self-determination" and were made up of new young members and veteran republican activists.

The societies held a rally, attended by 1,500 people, to commemorate the 20th anniversary of Martin McCaughey and Dessie Grew earlier this month. Peter McCaughey said he was "extremely disappointed" with Sinn Féin's condemnation of those who remain involved in 'armed struggle'.

After the Real IRA bomb attack on the Ulster Bank in Derry, Martin McGuinness called those responsible "conflict junkies" and "neanderthals". After the murder of two British soldiers at Massereene last year, he condemned the killers as "traitors to the island of Ireland".

Peter McCaughey said: "Was my brother a 'conflict junkie', a 'neanderthal' or a 'traitor to the island of Ireland'? That is what Martin McGuinness would call him if he was killed on active service today. My brother was a freedom fighter. He fought for a united Ireland. That goal is still there and remains deeply cherished by republicans in Tyrone.

"We were disgusted when Martin McGuinness stood at the gates of
Stormont with the chief constable of the PSNI after Massereene and demonised republicans. He did not speak for us."

Brian Arthurs said the nationalist community should not "pass on information or collaborate with the PSNI" as Sinn Féin and the SDLP urged: "Young people now, just like young people during the previous phase of conflict, will continue to be attracted to the republican struggle.

"It can be argued that an armed campaign is not advisable at this point in time but it will never be right to inform on those who decide otherwise. Informing on republicans will lead to their families being oppressed by the state. It will lead to the arrest and incarceration of volunteers and, at worst, to their death.

"It was wrong to pass information to the police 20 or 30 years ago and it is wrong now. The graveyards are full of young republicans put there because a small minority of the nationalist community passed information to the British forces."

Arthurs said the independent republican societies in Tyrone were "non-party political" and were not linked to Republican Sinn Féin, the 32 County Sovereignty Movement, or éirígí.

Arthurs and McCaughey said that, despite long-standing reservations about the direction of Sinn Féin's strategy, they and others had remained loyal to the leadership because they didn't want to split the movement.

"Two years ago, it reached the point that we couldn't stay," McCaughey said. "We were told at a meeting in Tyrone that Sinn Féin's support for the PSNI wasn't just a written policy, we had to implement the strategy in full or leave. So we left."

McCaughey (40) had been a Sinn Féin member for over 20 years. He served four years in the H-Blocks for possession of weapons. Arthurs is a former election agent for Sinn Féin MP Michelle Gildernew. In 1995, he was sentenced to 25 years' imprisonment for possession of explosives. He was released five years later under the Good Friday Agreement. He was arrested in connection with the 2004 Northern Bank robbery and released without charge.

In 2007, he was charged with obtaining money fraudulently in relation to a mortgage application. He was acquitted. He is currently facing the same charges again and has pleaded not guilty. His request to be tried by a jury, rather than a Diplock court, was refused. He is appealing that decision to the House of Lords.

Good luck boys in all your future endevours.May good Lord look over and protect you in all that you do.

Another week, another Suzanne Breen column about disillusioned ex-provos. Isn't there anything interesting going on in the north that she could write about?