Breaking News:
'Can they literally run up any expense they want?'
The range of figures for expenses – with Tom Parlon's €295k bill at the upper end of the scale – defies logic, writes John Downes 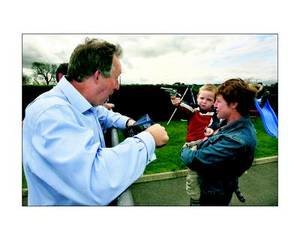 In the firing line: Tom Parlon claimed €82,495 in travel and subsistence expenses in 2006

Construction Industry Federation (CIF) boss and former TD Tom Parlon claimed over €295,000 in expenses during the four-and-a-half years he was a junior minister at the Office of Public Works (OPW).

Parlon claimed a massive €82,495 in travel and subsistence during 2006 alone.

This compares to a total of €28,526 which his two successors in the post of minister of state at the OPW, Noel Ahern and Martin Mansergh, claimed between them for 2008.

In the five months between January and May 2007, when he lost his Dáil seat, Parlon also claimed a total of €41,381, the figures show.

Overall, this brings the cost of his expenses to €295,927 for the four-and-a-half years in question.

Around €228,000 of these are listed under the category of "travel", with a further €57,395 listed as "payments to the Department of Foreign Affairs for travel and subsistence costs".

The remainder are listed as "subsistence" payments. Parlon, who is understood to be abroad on annual leave, was unavailable to comment when contacted by this newspaper.

During his time at the OPW, he oversaw the government's much criticised decentralisation programme.

But within months of losing his seat, he controversially transferred to the CIF on a rumoured salary of €250,000, where his role is to represent the interests of the construction sector.

A spokesman for the OPW was unable to respond to a series of questions in relation to the expenses in advance of publication.

However, Fine Gael TD George Lee, who obtained the figures in a written reply to a Dáil question, called for an explanation to be provided as to why the expenses claimed by Parlon were so high.

"The problem is not having any explanation in relation to how or why these bills were run up," he said. "I can understand how people might look at them as a gravy train. And you can't blame people for interpreting them in this way."

Lee, who has asked each department to provide details of the amount claimed in expenses by each senior and junior minister between 1997 and 2008, said another striking aspect of the responses he has received to date was the differences in the amounts involved.

"When you look at the range of figures we're getting, you have to wonder: what is the story?" Lee said. "Did different people have different attitudes to expenses? And can they literally run up any expense they want?"

Figures previously releas­ed by Lee show current education minister Batt O'Keeffe claimed expenses of more than €205,000 during his four years as a minister of state at the Department of the Environment.

But the figures provided to him for John O'Donoghue TD, who last week resigned his post as Ceann Comhairle after a series of revelations in the Sunday Tribune about his spending on foreign travel, amounted to just over €16,000 during his time as minister for arts, sport and tourism.

This is despite the fact O'Donoghue ran up an expense bill of more than €550,000, according to information released to this newspaper under the Freedom of Information Act.

I work in an office and in the past 3 years I estimate that I have paid over €60,000 in taxes. EVERY SINGLE CENT of taxes that I paid over the past THREE YEARS was spent by Noel Dempsey for ONE trip to the USA for St Patrick's Day. Evert cent of tax I have paid in the last 12 months was spent by him on limousine hire for that trip. This Government have taken me and everyone else to the cleaners. I am absolutely outraged. I cannot find the words to descirbe how appalled I am at the total and utter waste of MY MONEY.

Yes of course they can and will, is the answer until they are hauled before the courts and told you incurred expenses that had nothing to do with your brief and which were "not normal" pay the money back to that taxpayer or go to jail.

Sunday Tribune, If the new "Ceann Comhairle's" position goes to Seamus Kirk of Fianna Fail or to the Green's Trevor Sargeant could you tell us if they have any expense issues before they take up the post. I mean you/we/I wouldn't want to see another one fall on his expensive sword next week for same crime, would we? Just a thought!

That 16,000 that George Lee found out about re O'Donoghue was probably just for 'incidentals' or some limo rental or other...