Fears grow Lloyds will pull plug on BoSI
Capital injections of €4.5bn and closure of Halifax branches point up scale of burden Bank of Scotland Ireland is putting on owner
Jon Ihle and Ian Guider 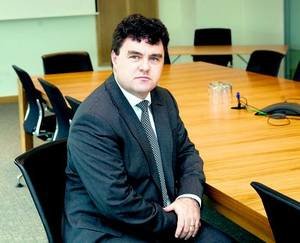 FEARS are mounting that Lloyds Banking Group may pull the plug on its Bank of Scotland Ireland (BoSI) operation after it racked up billions of euro in loan losses.

Two market sources said a decision was taken last week to wind down the bank's remaining businesses here having shut its 44-strong Halifax branch network in June. A spokesman for BoSI, when contacted by the Sunday Tribune, said the bank did not comment on strategy.

BoSI has been in the Irish market for more than a decade but has suffered crippling losses after ramping up its exposure to the property market in the Celtic Tiger years under former chief executive Mark Duffy.

Earlier this month the bank, now run by Joe Higgins, said it had set aside a further €1.8bn to cover losses in the first half of the year, a 50% increase on 2009. Nearly 44% of its total Irish loan book of €32bn was impaired at the end of June.

BoSI loaned €13.3bn for development and investment property in Ireland. Some €6bn of this was for property development, 90% of which was impaired, Lloyds said in a presentation to analysts in London earlier in the month.

The remainder of the loan book was for property investment, of which 45% was impaired, the bank said. The bank also said there was no activity in the property market here.

Lloyds has been forced to shore up BoSI with €4.5bn in capital injections in the last two years but the Irish business continues to be a drain on the bank, which is seeing its core UK bank emerge from the worst of the financial meltdown.

The closure of the 44 Halifax branches resulted in 750 job losses – about 45% of BoSI's total staff. The bank currently employs about 800 people in Ireland in business banking.

Such a pity and a great waste, when with a bit of foresight and a new strategy, they could recoup their finances and make Ireland a great place to invest in.
It would also give about 5K people new jobs.
Regards.

Welcome to the new Tiger!
This one eats its own children. Banking has a long way to go ..... back to a suitable size. The new economy will be about the size of that of 1992 or so. Delaying that move will be NAMA. When it has been emptied like the garbage bin it is ... then and only then will the economy grow in GNP terms. Decades, not years. Ask those you rely on why Japan has been depressed for two decades already!