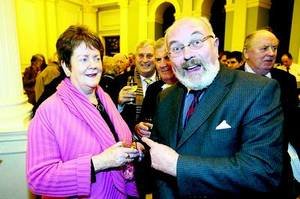 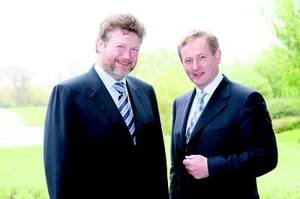 "The item represented a gross insult to the position of An Taoiseach, not to mention a personal affront to the dignity of the man himself."

"When I saw the paintings on Sunday in the Sunday Tribune I thought, 'Gee if a guy can't go to the loo in comfort, it's come to the bad pass'… I thought it was – I'm hesitant to say 'close to the bone' because that will be interpreted another way."

"Disrespect to the office of the Taoiseach? Come again? As a man once said, that's a grotesque, unbelievable, bizarre and unprecedented way of carrying on. Apart from anything else, if you cannot disrespect Fianna Fáil politicians and the offices they hold, who the hell can you disrespect?"

Columnist Alex Massie on the Spectator magazine website on Wednesday

"While I sympathise with the Taoiseach and his family, the public has noticed that it took gardaí six months to go into the Anglo Irish Bank."

Labour finance spokeswoman Joan Burton referring to the gardaí's visit to Today FM studios to recover emails between the station and the artist.

"The issuing of a grovelling apology by the national broadcaster is an abuse of independence and freedom of expression."

Fine Gael leader Enda Kenny in the Dáil on Thursday

"It is remarkable that a member of An Garda Síochána can turn up at a radio station within 24 hours of an item being aired but that when it came to investigating suspected wrongdoing at Anglo Irish Bank it took the authorities weeks to finally raid their offices."

"I was never able to influence RTé one way or the other. If they felt an apology was appropriate then it had to be appropriate."

What next? Prison for criticism. Will we have to look over our shoulders before we comment on any political personage for fear we might be held to account for anti-government opinions. Why were the Garda involved? What, specifically was the crime? This entire episode resonates with a 'Gulag' mentality. Any criticism in any form is not tolerated. Do we live in a Police State? Perhaps!!! I thought that democracy allowed freedom of expression. Some of the greatest political expressions are conveyed through the medium of satire. Public office brings with it the expectation of a certain public response. This incident brings back memories of a certain program that drew down the wrath of the political establishment which did not like satirical comment. I fear the future of the people of this country when the heavy hand of politics uses the law to implement censure. The men who fought for independence, and my father was one of them, did not intend this freedom to be abused in such an abusive manner as this. One is reminded of the phrase, 'power corrupts, and absolute power corrupts absolutely'. We should be afraid for democracy, for freedom of expression, and, dare I say it, the freedom to lampoon. It's an age old exercise. People in power must expect it, and must accept it. It goes with the territory.

Next it will be the author of a satirical poem, novel or play.