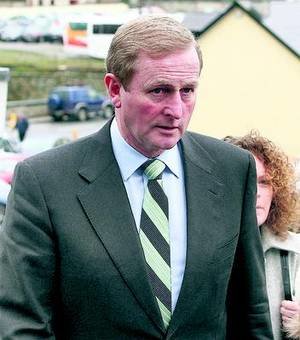 MORE than €41m has been paid out over the past four years in expense claims to the country's TDs and senators.

Two TDs have taken in more than €300,000 in expenses, primarily for travel and subsistence, but also in a dozen other categories for which politicians can claim.

The Fine Gael leader Enda Kenny also makes the top 10, with his claims since 2005 coming to a total of €285,277, the Sunday Tribune has learned.

Kenny faced strong criticism for his failure to intervene in the expenses controversy surrounding John O'Donoghue before eventually calling for the Ceann Comhairle's resignation.

The figures have been totalled for the first time and reveal that in just four years, pay and expenses for members of the Dáil have reached almost €100m.

They do not, however, include the costs of ministerial salaries or the expenses involved in overseas and internal travel for members of the cabinet.

Some of the highest-claiming TDs are among the most controversial, with Michael Lowry taking in €299,478.55 in expenses over the past four years.

Fine Gael's Bernard Allen, who described the package given to former Fás boss Rody Molloy as like "winning the Lotto", has also claimed close to €300,000.

Jackie Healy-Rae, the Kerry TD who was among the most vociferous critics of John O'Donoghue's extravagant overseas travel, has also fared well.

His total claims, most of which related to travel and subsistence, have come to €290,662 in the period since 2005.

Expense claims in the Seanad were similarly high with 16 senators claiming more than €200,000 during the past four years. The highest earner there was Fine Gael's Paddy Burke, whose expense claims since 2005 have totalled €286,033.

The vast majority of the expenses are unvouched and TDs are entitled to make claims under 14 categories, including telephones, committee travel, ISDN line rental, training and committee entertainment.

A "Den of Thieves" in the "Dail"...& it just doesn't involve "Fianna Fail". Thank you "Sunday Tribune" for giving us the facts, now I hope the people of Ireland don't relax...till all these cheats are thrown out on their backs. Politicos should be so much better than this, vote the lot of them out that's the next twist. That involves this "Den of Thieves" that are sadly today in the "Dail". Let's get rid of them, quickly, abruptly ..."One & All"!

Well done on another public interest story. However, the docility of the Irish people politically means that even if these figures were, say TEN times what they are - e.g. Michael Lowry raking in almost €3M - or let's say 100 times - and give him €30M - would it make any difference? Not on your nelly. You'd get a flood of calls to Liveline, but if you tried to organise say a march in protest over this, you'd get a few hundred - and probably only a handful if it coincided with Coronation Street on RTE, the X Factor or a Man Unoyhred or Liverpuwil game. The vast majority will vote for FF or FG, Labour and the Greens. So not a jot of difference these expenses will make to the political direction - or rather lack of it - in Ireland. A "No" vote on Lisbon was the chance to get rid of this shower. But the people knew better. The elite know they can get away with anything - and even if they lose their seats in a swap with others of the same ilk, there'll still be plenty of swill from the trough to go around in the shape of Senate seats, quango chairmanships, etc. The Irish people make the same political choices decade in decade out, and deserve what they get.

Suck, suck, suck on the titties of the emaciated old sow that is Mother Ireland.

Our TDs and Senators have a parasitical relationship with the society they supposedly ' serve'.
Kenny's hypocrisy over JOD's expenses has been truly exposed- during this time he was also in receipt of a Minister's pension and he continued to hold on to a permanent teachers position which means we will have to pay him a teacher's pension for the 20 years he was a full time politician. Kenny and Cooper -Flynn are well matched. He is really a Fianna Failler at heart.
I have voted FG for 10 years but will never vote for them again whilst this greedy little man 'leads' them.

Roger Rafferty is right. Look at the disgraceful raping of the taxpayer to pay off bankshareholders debts, called the totally un-necessary and treasonable Nama. Very few TD's or their immediate family members have not personally and significantly benefitted from this dramatic rip-off of the compliant Irish voters. Thats why they all voted for it.
This all goes to prove that there is actually no low to which our politicians will sink that could realistically change the voting patterns of the Irish sheep that vote for them time and time again.
No politician should be returned a second time to any post at local or nationallevel. Let the largess and corruption that typifies Irish politics be shared around.

In 1798 in Europe and in France knew how to deal same slugs who were feeding off them. They took them out and lopped off their heads. While we cannot go to those lengths, there is no harm in wishing

This proves how the whole body politic is corrupted. How can Enda Kenny hold Fianna Fail to account when he is no better. Time for a completely new start, a new political movement is needed on the basis of serving the people, not themselves. Changing FF for FG is a waste of time. Time to wake up and take responsibility for our own future....

Do you ever just feel sick of this country and the greed that attracts the worst candidates to elected office. I despair and wish for a new political system for the 21st century.

To Roger Rafferty, Daithi, anyone: I want to make a positive proposal. Remember the Iraqi reporter who threw the shoe at Bush? I want to suggest a campaign to have everyone in Ireland who is sick of our politicians behaviour to hang an old boot from their front door or window and put one in the back window of your old banger or hang it off the bike, to show them they are not welcome any more. The slogan of this people's campaign might be " No More, No way ! ".
This should be a campaign owned by everyone and it should last for the next ten years. No-one should vote for anyone to be re-elected to any political position. One time candidates only. New blood, less chance of corruption and more chance of honest dealings.
I have no interest in being elected. I am over 50, no work and am just another disgusted and tired and powerless nobody. But I want to push for action. I want to get angry in a way that will scare the hell out of our political caste. Please, please, lets do something together to change the world we live in. No re-election for anyone. No exceptions. No more NAMA, No more bleeding of the poor to feed the fat-cats. No More, No Way !
Please, everyone, no leaders needed, just solidarity. My own e-mail is , but I do not want to be a leader, just a nobody who had a good idea and started the ball rolling. This is everyone's idea and everyone can write to their local papers to push for everyone to put an old boot in the window and promise to never vote to re-elect anyone. New candidates every election.
Then we might see action on stuff like the following:
No more bleeding of the poor to pay for the rich like NAMA.
Halve the number of Dail seats.
Stop expense accounts to politicians. Salaries and petrol money only.
Reduce all political pensions and all public service pensions to a max of 50grand a year ( Yeah, its a lot, but you should see what they really are)
Bring back wealth taxes to fund basic services.
Bring back democracy and decency into public life.

I leave the ownership of this campaign to whoever can get the message out. Individuals should not be important. I am nobody, but the idea is a good one. Maybe every saturday night, all over the country, at exactly nine pm, people could appear at their window and shout out; " No More, No Way " ! ( I got that idea from the old film, "network", with Peter Finch, who suggested people go to the window and shout " I am madder than hell and I aint gonna take it any more".
That was fiction, but life can follow art, when we are desperate enough. Ifor one will do this every Saturday night for the next ten years. That is my personal promise and my boot is already in my window.
Jack Meskill

Oh Let them get on with their jobs. These are unavoidable expenses. If they were not claimimg expenses then people would think they are doing nothing. And they need to show the taxpayer that the work they do abroad is bringing industry and jobs to Ireland. There is little point in proving that you do all this on a shoestring because you will get no thanks for that.

41M euros would be enough to fund a small company of about 60 well paid people for 5 years. It is a huge chunk of money and could have created opportunities for many companies in Ireland.

Jack#10
I know where I would like to put my old boot!
Still.its good to know the over 50s can still enjoy a good spliff!