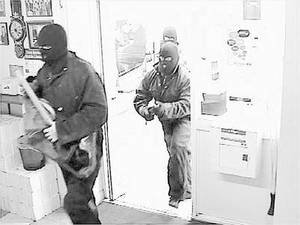 GARDAÍ have been asked if the getaway driver in an armed robbery in Donegal last year was an official garda informer as he was visible in CCTV footage,, but no one has been charged with the crime.

Some €108,000 was stolen when three masked and armed men held postmistress Bernie Moore at gunpoint during the terrifying ordeal.

Photographs from CCTV of the raid, obtained by the Sunday Tribune, show the three men entering the post office. The getaway driver is not clearly visible in these photos, but his face is identifiable from the CCTV footage.

It is understood gardaí believe some of the men responsible for the robbery are associated with the Continuity IRA. Detectives have recovered the getaway vehicle and guns used in the raid.

"The CCTV footage catches the driver of the getaway van quite clearly and either the PSNI or the gardaí at this stage must know who he is, as he has not hidden his identity from the CCTV footage. Is the driver of the getaway van an informer? If so, has he been interviewed and has Crime and Security collated C77s from this informant, if he is one?" C77s are internal garda confidential documents containing intelligence derived from informants.

Supt O'Brien wrote back to McBrearty on 25 February informing him that "the getaway vehicle and guns used in the robbery have been recovered". He added that "a number of suspects have been identified".

In a possible reference to the question of a garda informant being involved, he wrote: "The garda investigation file contains information relating to individuals who made statements to the gardaí, in the express or implied understanding that they are made solely for the investigation of this specific incident and will be treated in confidence."

Carrigans garda station is located opposite the post office but was unmanned at the time. Shortly before the raid, two detectives from Burnfoot station visited the post office to discuss an issue regarding a man who was due to collect his dole as there was a summons out for his arrest. This issue is understood to be unrelated to the robbery.

This weekend, McBrearty said he wasn't satisfied with the response from the superintendent. He now intends to write to the chief superintendent and the garda commissioner about the matter. The matter has also been raised with the garda ombudsman.

Is McBrearty trying to get someone killed? How inappropriate for him to demand inside information from the investigation. If the others didn't think the driver is an informant before, they surely will now.Maybe his body will get dumped in McBreartys garden with a Thankyou note!