Home News | International | Letters | Editorial & Opinion
Pointing the way to Leinster House: meet the Opposition Class of the 31st Dáil
With Fine Gael and Labour almost certain to make up the next government, who will be left sitting on the opposition benches? Political Correspondent Conor McMorrow looks at some of the most likely candidates 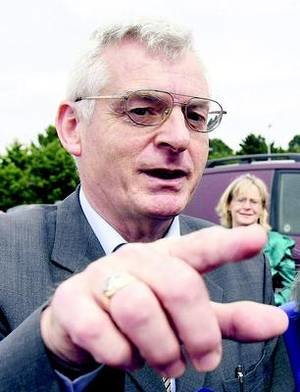 Joe Higgins: the quick-witted MEP should take a seat in Dublin West 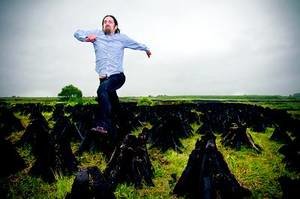 Luke 'Ming' Flanagan: sure to get protest votes in Roscommon/South Leitrim but is not certain of a seat 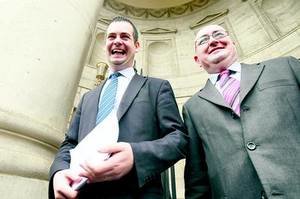 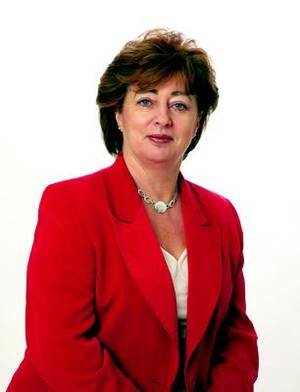 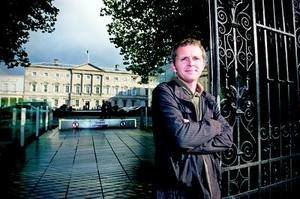 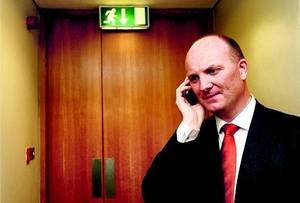 After Ceann Comhairle Dinny McGinley enters the chamber, the opposition is given one of its two chances in the week to pin Kenny with questions about the issues of the day.

As the opinion polls had suggested for some time before the March election, Fine Gael and Labour predictably won enough seats to go into coalition. With Fianna Fáil on just 14% in a number of opinion polls earlier in the year, it was inevitable that both Kenny and Gilmore's parties would come together after the election and hammer out a programme for government.

What was less predictable was the composition of TDs sitting on the opposition benches. The Opposition Class of 2011 has left us with what could only be described as a motley crew.

Like no other time in the state's history, the opposition benches are made up of a Fianna Fáil party that is on a life support machine after the drubbing it got on 11 March, a Sinn Féin party buoyed up by the arrival of Gerry Adams, and a host of other colourful characters who won seats in the 31st Dáil.

Rewind... Of course the election has yet to take place. There are 47 days to go until polling day but one outcome is already certain – the opposition benches in the 31st Dáil will be one of the most diverse groups of TDs ever to grace Leinster House.

Could a 'technical group' be formed between characters such as Michael Healy-Rae, Shane Ross and Deputy 'Ming The Merciless' Flanagan? Could a strengthened Sinn Féin and a weakened Fianna Fáil forge links with a view to going into government in the 32nd Dáil? Could Gerry Adams, who has never served a day in Leinster House, become the leader of the opposition?

The gloves are off and the election race has been on since Thursday afternoon. The Sunday Tribune looks at some of the characters who may well win seats on the opposition benches after the election.

Remember 'Dolly', the cloned sheep that was created by the Roslin Institute in Scotland in 1996? Meet 'Michael the cloned Healy-Rae'. The independent councillor from Kerry South was cloned at the Kilgarvan Political Institute. By wearing a flat cap and having the same mannerisms and political philosophy as his father Jackie, some political hacks have dubbed him 'Dolly'. If Michael, who regularly speaks on his father's behalf in media interviews, wins one of the three seats in Kerry South, he is expected to follow in his father's footsteps and is likely to be a clientelist, or 'parish pump', TD to his fingertips.

A senator since 1981, the journalist and former stockbroker has carved out a reputation in recent years as a people's champion due to his stance on the M50 toll bridge, Eircom shareholders, the Fás expenses scandal and the economic crisis. His critics might suggest he stands on an anti-establishment platform, while being part of the establishment for 30 years. But he should win a seat in Dublin South and his Seanad experience will stand to him. Expect him to be a TD who bombards the Fine Gael-Labour government with parliamentary questions about the state's finances.

Joe Higgins and his ULA friends

When revelations about then Taoiseach Bertie Ahern's personal finances were disclosed at the Mahon tribunal in 2006, Socialist Party TD Joe Higgins really came into his own and will forever be remembered for his quick-witted jibes at Ahern across the Dáil chamber. In late September 2006, Higgins famously said to Ahern: "Tell Paddy the Plasterer to stay clear of Callely's house – he's in enough trouble with the painter already."

Higgins has been an MEP since 2009. And in scenes reminiscent of the Dáil chamber in 2006, he taunted EU Commission president José Manuel Barroso over Ireland's EU-IMF bailout last Wednesday. He made headlines across Europe after forcing Barroso into losing his cool. He should take one of the four Dublin West seats on 11 March. And he will certainly get under the skin of the new government. Socialist Party councillors Mick Barry (Cork North-Central) and Clare Daly (Dublin North) could also win seats if there is a groundswell of support behind the United Left Alliance (ULA). Séamus Healy, the former independent TD for Tipperary South, could also take a seat from either Mattie McGrath or junior minister Martin Mansergh.

One of the great unanswered questions in Irish politics at the moment is whether Sinn Féin can convert its recent surge in opinion poll support into Dáil seats? Will it flatter to deceive again, like it did in 2007? Or can it do the unthinkable and be returned to the Dáil with more seats than Fianna Fáil?

Party leader Gerry Adams looks certain to win a seat in Louth and on a very good day Sinn Féin has the capacity to make seat gains in Donegal North-East, Dublin Central, Dublin North-East, Dublin North-West, Dublin South-West, Cork North-Central, Sligo/ North-Leitrim and Meath West. Adams' critics view him as a relic from the past but Sinn Féin's main strength in the 31st Dáil will be the arrival of a new breed of young, energetic TDs such as recent by-election winner Pearse Doherty and fellow Donegal man Pádraig Mac Lochlainn.

Eamon de Valera's party is fighting for survival. One political analyst suggested last week that "Fianna Fáil is now in a battle to become the largest party in opposition". It is anybody's guess as to how many seats the party will be returned with. At 14% in a number of recent opinion polls, some analysts predict the party will come back with a historic low of just 15 seats. There seems to be no bottom to the party's freefall at the moment. After the events of last week, Micheál Martin is the clear frontrunner to lead the party in opposition.

Pollster Seán Donnelly was right last week when he joked that the only safe Fianna Fáil seats were that of the Ceann Comhairle Séamus Kirk, whose seat is guaranteed, and Willie O'Dea's seat in Limerick.

There is an anecdote told in political circles that a journalist once looked into the back of Richard Boyd Barrett's car to see a megaphone and a number of blank protest placards. Boyd Barrett was born to protest and he is always coming from or going to a protest. He is contesting the highly competitive four-seat Dún Laoghaire constituency and on the basis of the 2009 local elections, the People Before Profit Alliance has a marginally better chance of taking a seat than Fianna Fáil, whose support collapsed to just 13% of the vote. If he does win a seat, expect him to bring a new brand of 'politics of protest' to the opposition benches.

The Fianna Fáil-Green marriage is in tatters. The Greens have been consigned to the spare room ahead of next month's divorce. It's a rule of thumb in Irish politics that if you are a smaller party and you go into government with Fianna Fáil, it will inevitably chew you up, spit you out and leave you on the political scrapheap. The Greens have been in 'PD territory', with dangerously low opinion results for the last three-and-a-half years. None of the party's six seats are safe and they are on the brink of wipeout.

Former leader Trevor Sargent may hold his Dublin North seat and if he does, he could be the lone Green on the opposition benches in April. The party formerly known as the the Green Party, could soon be dubbed 'the Green'.

Fine Gael's Richard Bruton and Lab­our's Aodhán O'Riordáin are expected to take the first two seats in Dublin North-Central. But there is expected to be a dog fight between Fianna Fáil's Seán Haughey and independent TD Finian McGrath for the last seat. Given the perilous state of Fianna Fáil, McGrath may hold onto the seat he first won in 2002 and put an end to the Haughey political dynasty. Having supported the Fianna Fáil/Greens/ PD coalition in 2007 before withdrawing his support, and now a member of the newly formed Sinn Féin-led technical group, McGrath is likely to side with a technical group in the next Dáil to gain all-important speaking time in the chamber.

Best known for his campaign to legalise cannabis, Luke 'Ming' Flanagan was successfully elected to Roscommon County Council in 2004. After proving himself to be a tireless worker at council level, he topped the poll at the 2009 elections and last June was elected mayor of Roscommon County Council. He is sure to get protest votes in Roscommon/South Leitrim but he is by no means certain of a seat. If he does succeed, he is certain to be among the more colourful TDs in the 31st Dáil.

One of the best vote winners in the Dáil, he may not get the 12,919 first preferences that elected him in 2007. But he will hold his seat in Tipperary North. With his level of experience, he will be one of the wiliest political operators in the Opposition 2011 class.

It has been reported by this newspaper and others that economist and commentator David McWilliams is set to contest the Dún Laoghaire constituency as an independent candidate. McWilliams has yet to confirm or deny this.

Since Fianna Fáil TD Beverley Flynn's recent announcement that she is to retire, Michael Kilcoyne, the Castlebar-based independent candidate, who has a national profile as a former chairman of the Consumer Association of Ireland, has a great chance of winning one of the five seats in Mayo.

Former Labour Party councilor Catherine Connolly, who will run as an independent, has been mooted as a possible winner in Galway West following the retirement of veteran Labour Party TD Michael D Higgins. In the adjacent Galway East constituency, councillor Sean Canney, who is a brother-in-law of former Fianna Fáil councillor and independent TD Paddy McHugh, is in with a shout and there is still some speculation surrounding Libertas founder Declan Ganley standing.