'These men had nothing to fight with except their lunch boxes and flasks'
Suzanne Breen, Northern Editor 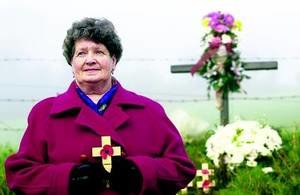 Beatrice Worton, who lost her son Kenneth in the Kingsmills massacre pictured at a memorial service at the scene

Alan Black recalls the banter between the 12 men on the minibus as they made their way home from Glenanne textile factory on that dark, rainy night. They were debating whether Manchester United or Leeds would challenge Liverpool for glory at the top of the English first division.

Then their vehicle was stopped on a deserted part of the road at Kingsmill by a group of men with combat jackets and blackened faces. The workers thought it was the British army.

"They ordered us out onto the road," Black says. "Even then, we didn't suspect anything. One man asked for the Catholic among us to step forward."

Fearing they'd been stopped by loyalists and the sole Catholic, Richard Hughes, was to be killed – his protestant colleague, Walter Chapman, whispered to Hughes to stay silent. But a man in combat jacket recognised Hughes and ordered him to "clear off down the road". Then the shooting started. "After the initial screams, there was silence," Black says. "It was all over in a minute." A total of 136 shots were fired. Despite being hit 18 times, Black survived.

Colin Worton's brother Kenneth (24) did not. "He left a wife and two young children," Worton says. "I don't know how the gunmen lived with themselves. They shot their victims first from three feet, then finished them off with a bullet to the head as they lay on the ground.

"Kenneth had no face left, it was blown away in the gunfire. You wouldn't do that to a dog. In war, both sides are meant to be evenly matched. But these men had nothing to fight with except their lunch boxes and flasks."

Colin Worton met Alan Black several times but has never been able to ask him about his brother's last moments. "I know it's wrong, but I resented that Alan lived and Kenneth didn't."

The HET report into Kingsmill is due imminently. The IRA figure behind the massacre is widely believed to be a man who lives in the Republic and is a major suspect in the Omagh bombing.

The IRA, officially on ceasefire, admitted the attack under the name of the Republican Action Force. Its claim that Kingsmill was in retaliation for the Reavey and O'Dowd killings is rejected by the Kingsmill families who believe the atrocity was planned much earlier.

Following Kingsmill, the Glenanne gang wanted massive retaliation on a Catholic school or convent but the Belfast UVF leadership prevented it, fearing further IRA retaliation. After the atrocity, loyalist sectarian killings in south Armagh ceased for some time.

But even republicans couldn't claim the dead weren't totally innocent. None were security force members, let alone paramilitaries. The night before the Reavey brothers were killed, they'd played darts with the two Chapman brothers who would themselves be murdered 48 hours later at Kingsmill. "When I was in the hospital morgue getting my brothers' bodies, the Kingsmill relatives arrived," recalls Eugene Reavey. "Our family knew them all. I offered my condolences. The Kingsmill victims weren't our enemies, they were our friends. They were ordinary decent people, just like us."

Even this article admits the killing of Catholics stopped after this attack, in other words the brits and Unionists stopped murdering catholic civilians because they had been made to realize that protestant civilians were just as vulnerable. Fair play to the Catholic Defenders, I say.

Poor Ryan. What an arse.

Do you find your sectarian analysis an infallible guide to your way through life? Or is it more of a comfort blanket?