Diarmuid Doyle - Bertie is out of public sight but it's never been more important to keep an eye on him.... 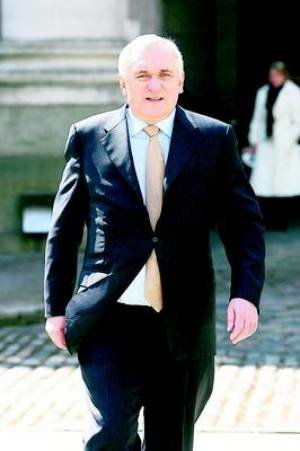 Brian Cowen was far more generous than he needed to be. Bertie Ahern, he said in a long statement of tribute to his predecessor, was the consummate politician of his generation, "a person of rare ability and extraordinary talent". Speaking after Ahern had announced he would not be running in the next election, Cowen waxed eloquent about the former taoiseach's "immense work ethic" and superb negotiating skills. "His fellow countrymen and women will always hold him in high esteem," he concluded.

Ahern, of course, is currently one of our most toxic assets, so Cowen's willingness to speak of him in such glowing terms was politically risky and uncommonly decent. The past few weeks have been marked by increasingly routine and bland statements from the Taoiseach paying tribute to the latest rats to desert his sinking ship, and he would have got away with something similar on Ahern's retirement. Instead he opted for glowing tribute.

Three days later, as we all know now, he got his reward when Ahern, in his role as highly-paid media whore, went on the attack in the News Of The World. Cowen was presented as a man of many mistakes, somebody whose main fault was that he didn't do it Bertie's way. From the chief political culprit for the economic downturn, it was farcically deluded and very nasty, although a timely reminder of the bile and bitterness which lies beneath that old Bertie bonhomie.

Timely, because Ahern cannot yet be consigned to history. In fact, now that he will be out of public sight, it has never been more important to keep an eye on him. He remains a menace and a threat to Ireland's prosperity through his significant, but little commented on, position as chairman of the International Forestry Fund.

So far, only the Sunday Tribune among the country's newspapers has paid close attention to Ahern's role in this private company. Independent TD Maureen O'Sullivan has asked a Dáil question and Sinn Féin's Martin Ferris has thrown a few shapes about the former taoiseach's latest gig. But, as with John O'Donoghue's expenses a few years ago, it is taking the political classes a while to wake up to this issue.

Although the International Forestry Fund sounds like a vaguely cuddly group, which loves trees the way some of us love kittens, it is in fact a very profit-conscious joint venture between two private asset management companies, Helvetia Wealth and IFS Asset Managers Limited. It makes its money by acquiring existing forests on behalf of investors. As it says on its website, Helvetia has 1.1bn Swiss Francs (€867m) in assets "following a number of very successful acquisitions in the UK, Germany and Ireland". IFS currently manages in excess of €100m of forestry assets on behalf of 18,000 private and corporate clients in this country.

In Ireland, most of our trees and forests belong to the state agency Coillte, which owns more than one million acres of land – about 7% of Irish land cover. In July last year, Colm McCarthy issued his An Bord Snip Nua report in which he suggested, among other ideas, that the government look at flogging Coillte as part of a mass sell-off of state assets.

This obviously piqued the interest of the cash-rich International Forestry Fund and five months later it announced that Bertie Ahern had been appointed as its chairman. "Mr Ahern implemented bold economic initiatives that included corporate tax incentives and education reform", the Fund said at the time. "His efforts laid out a welcome mat for international corporations, making Ireland an attractive location for foreign companies".

Indeed. Seven months after that, in July 2010, McCarthy was given a new job – to look in more depth at the idea of selling off the state assets he had mentioned in his 2009 report. One of the companies specifically targeted was Coillte.

By now, the International Forestry Fund, with Bertie Ahern firmly ensconced at the top, was salivating at the prospect of getting its hands on Coillte and the 7% of Ireland that comes with it. "We would certainly have an interest in that regard," Paul Brosnan, the fund's director, told this newspaper last year. "We have always had an interest in Coillte. It certainly would not be beyond the bounds of possibility that we would acquire it."

Of the very many questions that arise from all of this, here are just some: why on earth would we sell 7% of Irish land to private investors? Why is a former taoiseach heading up a company registered in the Virgin Islands which wants to profit from more than one million acres of the country he used to run? How much is he getting for whatever advice or help he will be giving to help secure this grand sell-off? Does the Green Party have anything to say? Will Bertie Ahern make a statement on the issue?

Many of these questions would be irrelevant if Ahern was to resign from the International Forestry Fund or if the fund was to confirm that it had no interest whatsoever in Coillte, now, or in the future. Such outcomes seem unlikely, however. The former taoiseach and the company he chairs are apparently both driven by an insatiable greed for money. They are perfect bedfellows.

The epidemic of pay cuts that has afflicted hundreds of thousands of workers over the past few years has done so much damage to the economy it is tempting to take a benign view of the judges who have so far refused to voluntarily give up some of their wages.

Not if you're Alan Shatter, however: the Fine Gael justice spokesman has called for a referendum to allow the salaries of judges to be cut.

Nevertheless, the fact remains that the removal of hundreds of millions of euro of spending power has had a hugely depressive effect on the economy and has been directly responsible for so much of the rise in the unemployment figures, which continued unabated last week.

Seen in that context, the 22 judges who were revealed last Thursday to have refused to make a voluntary contribution to the pension levy could be said to be principled warriors against the kind of austerity which has brought the country to its knees.

Or perhaps they're just greedy bastards.

Have to say fair play to FG on this one.

They are also meant to be in favour of mandatory sentencing. (a few years ago anyway).

And they better go through with these two things!

Ironic that it is left up to FG to deal with this country's untouchable and arrogant aristocracy, Judges (who incidentally don't seem to be good at judging from watching the news).

Madam K is keeping her eye on him; google her attempted interview with this same character on O'Connell Street. He had to call a passing cop to protect him, all huff and puff without a cop beside him. She was asking questions he didnt want to answer and was well ruffled.

This is the first article that I've seen that has highlighted the Coilte issue.
Thanks for it - and keep it up; this issue, and that little git, need to be watched closely !!!

I have to agree keep an eye on bertie ..but i think bertie in that role will actually cause more problems for the company

On salary cuts ..most salaries in ireland were too high and inevitably have to be reduced you just have to compare salary levels here with comparable jobs across europe and know they were too high and similarly with social welfare rates ..as well as taxes being too high. Fianna fail primarily responsible but Unions leaders played a big part in the madness.

Pathetic comments re judges as principled warriors they are part of the upper civil service that was ridiculously overpaid.

And of course de bertie didn't return de compliment to Cowen, he probably blamed cowen for his departure no honour among tieves... den.. he disagreed with Cowens negotiating skills,de bertie said he would do better imself, well he did, just look at the malarky to fund the church for its paedo abuse, seani dis & paddy dat in the tent.. dose judges just like de oliver twist bunch,& dis company will probably own our souls if we are not careful. A law should come into force now, indicating, that any earnings over 50k, should go into a pot to pay off the national debt, & m'lords & de bertie & any other cad can take the boat if they dont like it.