Home News | International | Letters | Editorial & Opinion
How Real IRA Killed Denis Donaldson
Real IRA Representative - 'We always intended to claim the operation [killing of Denis Donaldson] but we wanted to wait until we had first executed crown force personnel. That was secured at Massereene'
The Real IRA say they want to kill five named men who informed on the provos' activities. They also claim here how they killed Denis Donaldson, whose assassination in Co Donegal they describe as a 'matter of principle', writes Northern Editor Suzanne Breen 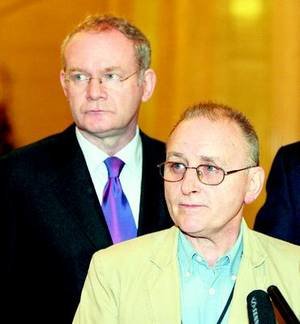 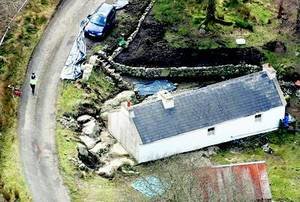 Gardaí investigate the scene at Donaldson's house near Glenties, Co Donegal after the killing in 2006 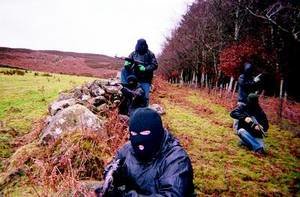 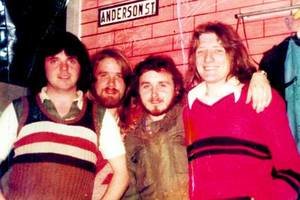 Denis Donaldson didn't scream when the two masked men sledgehammered down the door and forced their way into his cottage with a loaded shotgun. "The look on his face wasn't even one of shock. He seemed to know what was coming," says the Real IRA Army Council representative.

Had he cried out for help, no-one would have heard. His nearest neighbour in the remote lane outside Glenties, Co Donegal, was two kilometres away. His wife Alice, who still lived in west Belfast, and his grown-up children, visited regularly. But his killers had Donaldson under surveillance. When they struck, they knew he was alone.

Donaldson was totally vulnerable. He didn't have a personal protection weapon. "He had no plan to defend himself. He hadn't a baseball or hurley bat, a knife or anything like that at hand," says the Real IRA spokesman.

"He just ran into the back room. There was a struggle, and he ended up on the ground. He didn't cry out or plead for mercy. He remained silent all the time." Donaldson was killed by the Real IRA gunman as he lay on the floor, according to the Army Council representative.

Donaldson's right hand was virtually severed in the shooting. There was some media speculation that this was symbolical because of the money he'd taken from the British for his services. "That wasn't so," says the Army Council spokesman. "His hand was blown away because he'd raised it to protect his head." The attack was over in minutes.

Donaldson wasn't tortured, as previous informers have been. Neither was there any attempt to question him. The Real IRA didn't consider abducting and interrogating him: "There was no need to debrief him because he'd done no damage to our organisation."

Embarrassment to the Provos

Initially, the killing looked amateurish because of the use of the shotgun. But it was more professional than it appeared. Used at close quarters, a shotgun is lethal and is virtually forensically untraceable.

It's just over three years since his killers left Donaldson lying on the floor of his pre-Famine cottage, hidden in the Doochary hills. The Army Council representative claims he was shot on the night of 3 April, and not the following morning as some media reports stated. He says a neighbour, who claimed to have seen Donaldson the next morning, was "mistaken".

But it wasn't until the evening of 4 April that a passer-by, noticing the damage to the front of the cottage, contacted gardaí and his body was discovered. Four months earlier, Donaldson (56), Sinn Féin's chief administrator at Stormont, had admitted being a long-serving British spy.

Provisional IRA members, acting either independently or with leadership authorisation, were the most likely suspects for his murder. Days after the killing, sources close to the Real IRA told this reporter they didn't believe dissidents were responsible. Donaldson alive was an embarrassment to the Provos. They couldn't see a reason for dissidents to kill him. So why did the Real IRA do so?

The Real IRA representative says its seven-strong Army Council debated at length whether to kill Donaldson: "Some individuals thought it was better propaganda value keeping him alive because it increased grassroots Provisionals' dissatisfaction with their leadership.

"They were angry at Donaldson's treachery and angry at their leadership for not executing him, for letting him slip off to Donegal unharmed. The Provisional Army Council did a dirty deal with Donaldson like they did with Freddie Scappaticci.

"But the other argument put forward among our leadership was, that by executing Donaldson, we could show – unlike the Provos – that we weren't prepared to tolerate traitors. We would prove that while the Provos shirked their duty under the green book [IRA rulebook], true and faithful republicans would not."

'They haven't a clue'

The Army Council representative is dismissive of the garda investigation into Donaldson's murder: "We don't believe it's going anywhere. They haven't a clue." Gardaí insist the investigation remains alive.

But why has the Real IRA waited three years to claim responsibility? Until now, there wasn't even a whisper that the organisation was involved. "Only a dozen people knew we executed Donaldson – our Army Council and the volunteers involved. Our wider membership will be as surprised by our statement as everybody else," says the spokesman.

"We always intended to claim the operation but we wanted to wait until we had first executed crown force personnel. That was secured at Massereene. The time is particularly right now, when we're being accused of treachery by others, to show what we do to traitors."

The Army Council representative says Donaldson's killing wasn't due to a personal grudge against him: "None of the information he gave his handlers affected our organisation. While some in our leadership knew him from their days in the Provisionals, he hadn't personally harmed them. But he was a self-confessed informer, and it became a matter of principle to execute him."

An eye for women

Donaldson had joined the IRA in the mid-1960s. He grew up in the Short Strand, a small nationalist enclave in east Belfast. In 1971, he was sentenced to 10 years in Long Kesh for explosive offences. There, he became friends with Bobby Sands. There are photographs of Donaldson, Sands, and other IRA men, arms locked around each other in camaraderie.

After his release, he became involved with Sinn Féin but he remained active in the IRA. As a senior intelligence officer, he travelled the world to meet organisations like the PLO and ETA, providing valuable information for his handlers. In the 1990s, he was sent to run the Noraid office in New York, clashing with its publicity director, Martin Galvin, who came to doubt his motives.

Donaldson was a highly sociable, popular character with an eye for women. He was very close to Gerry Adams. He wasn't intellectual but smart in a streetwise way.

His pleasant, modest manner meant he sat in on numerous confidential conversations. No-one suspected him. "Ach, it's only Denis!" they'd say.

There were rumours he'd been blackmailed by the security services into working for them after he was caught stealing from Marks & Spencer as a young man. However, that didn't explain why he remained in their employment for so long. After his admission in December 2005 that he'd been a spy for well over two decades, Donaldson was questioned at length by Sinn Féin figures.

He later received assurances from the Provisional Army Council that his life wasn't in danger. So he moved to the Donegal cottage he'd previously used as a holiday home. The Real IRA's admission that it killed him means other informers, living in Britain or abroad, are now under threat.

The Real IRA spokesman claims its prime target is long-serving British agent, Freddie Scappaticci, who formerly ran Provisional IRA internal security, and whose information led to the death and imprisonment of scores of republicans.

"Other targets would be P**** ****** [an informer whose alias is Kevin Fulton], Martin McGartland, Christopher Black, Raymond Gilmour and Dave Rupert," he says. Rupert, an FBI-MI5 agent, was paid millions for successfully infiltrating the Real IRA. His testimony led to the conviction of former Real IRA leader, Mickey McKevitt.

Missing from the Army Council representative's stated list of 'targets' is Paddy Murray, a Provisional IRA member who later joined the Real IRA. He was jailed for abduction and assault last year but was later spirited out of Maghaberry prison.

Although Murray and his family have protested his innocence, he is now widely believed to have been an informer. He is reportedly living under a witness protection scheme in Britain. The Real IRA refuses to comment on his status, however it is likely to be pursuing him despite its silence.

The paramilitary group's threats against informers will further increase the pressure on many men who, years after leaving the North, are still living on their nerves.

Makes me laugh that this bunch of hypocrites have more informers than any other organisation have ever had.They have not got the brains to get to the mainland nevermind find scap or marty.I think they should have an internal investigation at the top of their tree.

Clearly RIRA is a front for Sinn Fein and the surrogate replacement for the PIRA. They killed Donaldson because they were given the nod by a Sinn Fein leadership who didn't want to be implicated.

RIRA is not a front for PIRA and the RIRA leaders know they will be wiped out by the PIRA who are 'alledgedly' on standby and have never stood down,if they ever tried to have a go at any veteran republicans.

You clearly know nothing of the current situation if you truly believe that John.

Where is the mainland?

I always thought that the provos turned a blind eye to these people,while sein fein appeared to go down the peace route,let the real ira keep up the armed threat .to threaten maginess is a direct threat to the peace a process the majority of the provos agreed with,all this renewed violence will do is keep us there another 30 years,theve learnt nothing,britain will never back down to terrorists,the real ira have challenged the provos ,their pushing their luck ,be intresting to see how they react

Declan speaks of the 'mainland' so maybe he thinks the people Ms Breen interviewd live on rathlin or Tory.

I think we can safely say from reading the above that the Real IRA is a creation of British Intelligence.

Perhaps Republicans are getting too out of control presently and the British are ready to launch a new organisation "The Real IRA" to run any counter insurgency required.

1st you gotta kill your own to demonstrate your bona fides (Massareene). 2nd you need to recruit any like minded iditots interested to join your organisation. 3rd you grow it a little, carrying out further terror attacks. 4th you bring about it's demise through infiltration and assassination. 5th you go on to your new job in Baghdad or Kabul doing the same having perfected what you did in NI.

Blah Blah The RA are just waiting to wipe these guy's out and they know it.RIRA created by m16.