Home News | International | Letters | Editorial & Opinion
U2 270°: U2 Claw won't even be the real thing at Croke Park gigs
U2's much-showcased 'Claw' stage at Croke Park won't be 360? and won't be in the centre of the pitch, writes Jennifer Bray 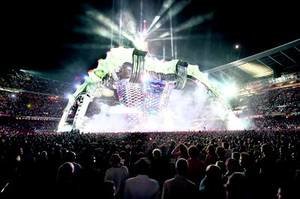 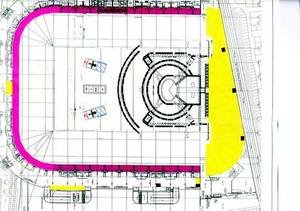 ABOVE:planning documents for the concert as submitted to Dublin City Council show the stage backed up against Hill 16, which is marked as 'backstage area'. Right: the full 360° effect in the Camp Nou

U2's 'Claw' – hailed as the latest in revolutionary 360° ? stage design – is set to disappoint Irish fans when it makes its way to Dublin later this month.

Planning documents obtained from Dublin City Council show that the 360° stage showcased on the opening night of the band's world tour in Barcelona last Tuesday will be more of a 270°? affair and won't be built in the centre of the pitch. Instead, it will stand in front of Croke Park's Hill 16 surrounded by the three stands of the stadium. The hill will be an unofficial backstage area and will not be open to fans.

Stadium director Peter McKenna said last week that there would be "no seating in the Hill 16 area". And given the architecture of Croke Park, there is very little pitch area for fans behind the massive stage.

Costing in the region of €100m, the stage made its debut in Barcelona's Camp Nou last week to an ecstatic 90,000 strong crowd. Sitting in the middle of the venue, it allows for all-round viewing.

Speaking about the stage set, which was designed by Willie Williams, who also put together their Vertigo tour set, Bono said last week: "It's an idea we've been working on for about eight years, much to the scepticism of my band mates and most people in the industry who said it wasn't possible to play like this in the round.

"Our ambition with the production is to create a piece of emotional architecture, using engineering as a way to get closer to our audience, to surround ourselves with them.

"Can we make our audience the fifth member of the band, almost have them on stage?"

McKenna denied that the stage would not be quite as spectacular as was seen in Barcelona and said: "The stage will look exactly as it did in Barcelona. The fans will be able to see from all angles as the band originally intended. There will be no seating on Hill 16, but there will the sense of a back to the stage.

He assured fans that "it will be the full 360° construction.".

The 165ft-tall steel structure comprising lights, speakers and 360° video screens takes up to four days to put together, and the band currently have three stages at their disposal – one to perform on, another for technicians at the next venue and one as a contingency plan.

Asked for a comment, a spokesman for promoters MCD said: "the layout is as per site plan on ticketmaster.ie".

The U2 360° tour has sold 2.5 million tickets throughout Europe and North America since the tour was announced in March, and 160,000 tickets for the Croke Park concerts on 24 and 25 July sold out in just 40 minutes.

A total joke, they are making a mockery of their own people

i am a big fan of u2 and im looking forward to the gig in croker but if this is true i think u2 should cop on and put the claw in the centre of the pitch because what about the people in the back on davin stand? its a joke

The stage was off centre in Barcelona, and Milan, it just happens that they are full bowl stadia, with proper stands at each end. Croker has the hill. The stage is so big it covers about half the pitch anyway. E veryone will have a view except at the hill. Oh wait, there are no tickets on sale there. Do your homework!

It was on seating plan when you bought your ticket, didn't you look?
It will still be a cracker unless you end up on the Hill!

Well at the minute it looks like all 3 gigs won't be sell outs. The tickets released last Monday are expensive and aren't selling. Do these U2 clowns not realise we're in a recession and people can't afford to pay these over inflated prices to see a bunch of over inflated egos?