Home News | International | Letters | Editorial & Opinion
Junior no racing certainty in a clash of unionist ideologies
The younger Ian Paisley has a battle on his hands to retain the family seat – he must overcome the staunchest critic of DUP 'sell-out' politics.
Northern Editor Suzanne Breen reports 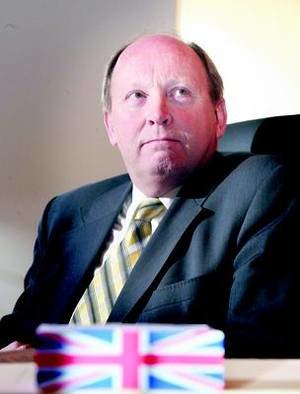 Ian Paisley Jnr isn't afraid of stepping into anybody's shoes. In North Antrim, he's battling to retain the Westminster seat his father has held for 30 years. But there are even greater unionist gods to emulate.

Junior's at Stormont, launching a new motorcycle championship race. He messes about with the bikes, then just can't resist. Suddenly, he's standing on top of a bike, hand raised in the air in the iconic pose of Sir Edward Carson, unionism's founding father.

Carson's statute is a few yards down the hill. "Are you running for the circus or parliament, Ian?" asks Assembly member David McNarry. Junior is just having fun. A raven-haired model, in high heels and shorts so skimpy they'd make most DUP men blush, joins him on the bike.

"Danger, children at play!" announces DUP's Stormont sports minister Nelson McCausland. Paisley Jnr does everything with a mischievous twinkle in the eye.

Paisley Jnr has a motorbike himself, a Triumph 900. Whenever he has time, he takes to the road. "Now, could you picture Jim Allister on a bike?" he asks. "He wouldn't know one end of an exhaust pipe from the other! That's Jim's problem ? he lacks the common touch and he's a hugely negative person. He has no plan for Northern Ireland's future. All he does is throw mud at me ? the candidate ? and my father, the legend. It's personal, petty, childish politics."

The bitterest election battle among unionists is unfolding in North Antrim. Much more than the Paisley dynasty is at stake. Allister resigned from the DUP three years ago denouncing the "sell-out" of entering government with Sinn Féin. A victory for him would shake the North's political institutions to the core.

"I speak for thousands of disillusioned traditional unionists," he says. "I am a conviction politician. Unlike others, I am not motivated by ego or power. I won't sell my principles for the sake of office."

On paper, North Antrim should be an ultra-safe DUP seat. In the 2005 Westminster election, Paisley Snr had an 18,000 majority over his nearest rival, and Allister's TUV didn't even exist. But TUV tallies from last year's European election showed the TUV on 30% in North Antrim, the DUP 24%, and the UUP 20%. Yet, even if accurate, that was against Diane Dodds, and the Paisley name carries far more weight than Dodds' in North Antrim.

"It's a big task for me to overturn an 18,000 majority," Allister says. "But they say, 'the bigger the majority, the bigger the fall'. I'm up against brand Paisley, and I'm going to surprise them."

A heavyweight lies on Paisley Jnr's shoulders but it's one he's been preparing to carry for decades.

The youngest of five children, he's his father's blue-eyed boy. "My da didn't want me to go into politics. He would have liked me to follow his first passion and go into the church, but it wasn't for me. Politics is in the blood. I grew up with it around the kitchen table.

"I remember Jim Allister in our house when I was a kid. He was a very vain man, even then. He wasn't happy with his election photographs because his eyebrows were missing. He wanted them reprinted but me and Kyle [Ian's twin] drew the eyebrows in for him instead. Now, I'd scalp Jim ? not that he can afford to lose any more hair!"

Paisley Jnr says his name gives him an "undeniable advantage" in politics: "I'm a chip off the old block but I'm not a clone. Ian Paisley Jnr has made his own mark." In Ballymena's loyalist Harryville estate, where Protestants once picketed a Catholic church, he's warmly welcomed. An old woman stands at her garden gate, waiting for him. "Your daddy always got my vote and now it'll pass to you," she says, hugging him.

"I was always Paisley. I voted for the oul' boy and now I'm voting for the young buck," one man says. Ian Jnr has a great way with voters. He sings as he skips up pathways. Four-year-old Alex Jones gets a push on his swing. "You're a big kid!" Alex's mother says to the candidate. "I was on the trampoline last night!" Junior jokes. He gives Alex a sticker: "If I was 18, I'd vote Paisley".

The only negative response is from a man vacuuming his car: "I won't vote for you. At the last election, I asked whether you'd go into government with Sinn Féin and you said 'wait and see'. I don't like what I saw." The man is voting TUV.

Paisley Jnr defends the DUP's decisions. He says the party secured a major victory for unionism by forcing IRA decommissioning and Sinn Féin support for policing. He insists his constituency work is first class. "Last year, my office dealt with 18,000 cases of people needing help," he claims.

Paisley Jnr (43) claims "an age advantage" in the election: "Jim Allister is a man who made his fortune at the bar and is now approaching retirement. He sees politics as a hobby." The Sunday Tribune points out that Allister is only 57. "Well he looks 10 years older!" Paisley Jnr quips.

In farmland outside Ballymoney, Jim Allister is receiving a very positive response. He talks about the DUP's "sleaze, corruption and family dynasties" which have brought shame on Northern politics.

He lambasts the lack of democracy at Stormont. "The whole system of mandatory coalition is rotten. You'd have to travel to North Korea to find another country in the world which doesn't have an opposition or where you can't vote a party out of government."

Allister says Paisley Snr would have been a tougher election opponent. "There'd be more sentiment for the father. People have a certain view of the son… and unlike Mr Paisley Jnr I have the advantage of actually living in North Antrim, and not in Co Down."

He claims Paisley Jnr's controversial links with property developer Seymour Sweeney, which led to his resignation as a junior minister two years ago, are damaging the DUP candidate in the north of the constituency where Sweeney is unpopular.

On the doorsteps, Allister isn't one for small talk. He introduces himself, asks voters if they've any questions, and tells them to read his literature and that if they like what they read to vote for him.

James Adams will. "I heard the words 'Never! Never! Never!' many times and the DUP didn't mean it. A man is only as good as his word," he tells the TUV candidate. An elderly farmer complains of potholes. "Conor Murphy's Regional Development Department can't fix the roads yet it can set up Irish lessons for civil servants," Allister retorts as the farmer shakes his head in disgust.

The TUV canvassing team includes many ex-DUP members. "I carried the coffins of 18 UDR and RIR men killed in the Troubles. The DUP has let those men down and sold us out," says former DUP activist Billy Kerr. He raises his eyebrows at the mention of Paisley Jnr's name.

Not that Ian Óg would care. So does he really think he'll win on 6 May? "As my father says, elections are like motorbike racing ? you get in front and stay there!" he declares, as irrepressible as ever. Ian Paisley Jnr just won't countenance coming second.