Home News | International | Letters | Editorial & Opinion
'I picked her up... Then I saw a hole in her head'
Suzanne Breen 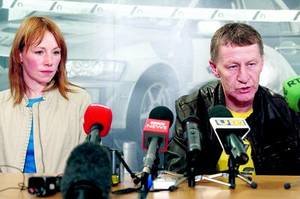 It was 30 years since Merle Eakin had last set eyes on her only daughter but the memory was as vivid as ever: "I can still see her there, eight years old in her wee brown trousers, washing the shop windows, laughing and talking away to herself.

"One minute she was shouting at me to come and see how she'd cleaned right into the corners of the windows like her daddy had told her, and the next minute she was dead. We were planning to make scones later that day. She loved baking."

Kathryn Eakin was the youngest victim of the Claudy bomb. I interviewed Merle and her husband Billy in 2002 on the 30th anniversary of the explosion. Like Omagh, Claudy was a cross-community atrocity. Five Protestants and four Catholics were killed.

The poet James Simmons captured the horror: "An explosion too loud for your eardrums to bear/ Young children squealing like pigs in the square/ All faces chalk-white or streaked with bright red/ And the glass, and the dust, and the terrible dead."

The Eakins owned the village grocery store. There's a photo of Kathryn, aged five, earnestly putting potatoes into a bag at the very spot where she would later be killed. "At first after the bomb went off, I didn't realise the extent of her injuries," said Billy.

"I picked her up off the pavement. She wasn't moving but I thought she was okay because there was no blood. And then I saw a hole in her head. It was only the size of a pen nib but it didn't matter. Kathryn was gone."

A single piece of shrapnel to the skull had ended her life. She was a mischievous child who loved liquorice and ghost stories, sand dunes and ice cream. The Eakins' home and shop were destroyed in the blast as were many of Kathryn's belongings.

But some things survived and her parents treasured them. Her wellington boots still full of sand. And in a box, Billy and Merle kept her school reports, her baptism certificate, jotters where she'd practised her sums, and pages where she'd scribbled down grocery lists – copying her father in the shop.

The Eakins' clothes were destroyed in the bomb. Merle had to borrow a dress to wear to her daughter's funeral. Billy couldn't understand how the IRA man left the car bomb after seeing his daughter on the street, cleaning the windows.

"We received £58 compensation from the government for Kathryn," he said. "We should have sent it back but we used it to buy Mark, our son who was only 12, a portable television. We were so devastated when Kathryn died that Mark lost out and we were trying to make it up to him."

The couple hoped the ombudsman's report would provide answers. But they never lived to see it. They died in 2008 – within six months of each other. "I talk to Kathryn every day and I can still hear her voice but I long to hold her in my arms," Merle told me.

"Had she lived, she'd be a grown woman with children of her own now but I can't see Kathryn like that. She's still just my wee girl, in her brown trousers, laughing as she cleans the windows."

How in the name off god can anyone cover up this sameful crimes in the name of humanity... People in south derry must come forword and tell the families..... these people have suffer enough... just the same as everyone else ...who lost loved ones....... peace will only come when all these people who incited war crimes are put away .... so that the good people of North and South of Ireland can live in peace.... at one without fear power and being controlled by thoses who murdered there way into power through bullying... shame on you....

I agree with Mary.
Thanks for a beautiful article. Why (the hell) do we keep doing these terrible things to each other?