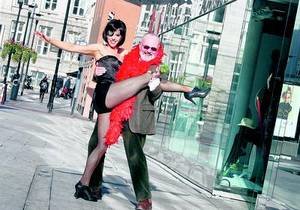 Senator David Norris on Dublin's South King Street: 'I think the election of someone like myself who has always been openly gay would mark an historic acceptance'

Senator David Norris has declared an interest in becoming the next president of Ireland, claiming that the election of an openly gay man to Áras an Úachtaráin would continue the "remarkable tradition" which started with the election of Mary Robinson as Ireland's first female president.

Describing the role of first citizen as the "greatest honour your fellow Irish people can pay you", he also vowed that if elected, he would represent a broad spectrum of people, as he does in his Seanad role.

The well-known Joycean scholar and human-rights activist told the Sunday Tribune that while his natural political leaning would be towards the Labour party, he was open to approaches from other political parties, including Fianna Fáil, Fine Gael, the Greens and even Sinn Féin.

"I have no party allegiance and I think that the people want somebody like that. There are decent people in all the political parties… but people don't want another party person," he said. "But put it this way, if any realistic proposition was put to me, I would consider it actively. I am a realist.

"If I was approached, and if there was a realistic proposition, I would not despise support or votes from anybody… I think I would probably draw support from all quarters. But the question is would I get enough and I just don't know."

President Mary McAleese was reelected unopposed in October 2004. Her second and final seven-year term of office ends next year. To be a candidate, a citizen must be over 35 and must be nominated either by at least 20 members of the Oireachtas, or at least four administrative counties.

Norris acknowledged that it could be "very difficult" for him to be elected without the support of the Labour party. He also stressed that it would be very difficult for him to consider running if his good friend and "conscience of Ireland", Labour party TD Michael D Higgins, decides to become a candidate.

Norris said he had not been seriously sounded out on the presidency by any of the political parties, but was aware of "whispers" about such a move. He warned that he would "not take lying down" any of the "dirty tricks" which he claimed had marred Labour's 1997 presidential candidate Adi Roche's campaign.

He had ruled himself out of being Dublin mayor as he does not believe he has the "correct set of talents" for that job.

"I think I could do things, again, like Mary Robinson. Mary Robinson was our first woman president, and I think the election of someone like myself who has always been openly gay would mark an historic acceptance," he said.

"And I think that would be good. But of course that is a minority of people in the country, and I've made my political career out of addressing issues of human rights that spread right across… But in the same way as my very presence in the Senate, once they got over it, made a mark, I think the same could happen if I was asked to run for the Park."

Norris was responding after being contacted for his views on the presidency in view of various online campaigns in support of him running for president.

By the middle of last week, a Facebook page for "those who wish to see David Norris elected as First Citizen of Ireland" had over 850 members. A similar Bebo page and separate online petition have also attracted support.

"The pressure has come from people. And it's pretty consistent, and, of course, I feel obliged to say yes of course, I would consider it and it would be a huge honour," Norris said.

"I'm an ideas man. And I've contributed ideas. I mean the Metro, for example, was my idea, for the last 25 years. And I skillfully steered it through. And it looks as if even in the recession we might get it.

"All this Joyce stuff, Bloomsday and all this, that was my brainwave 30 or 40 years ago,and look where it's gone."

Race for the Áras